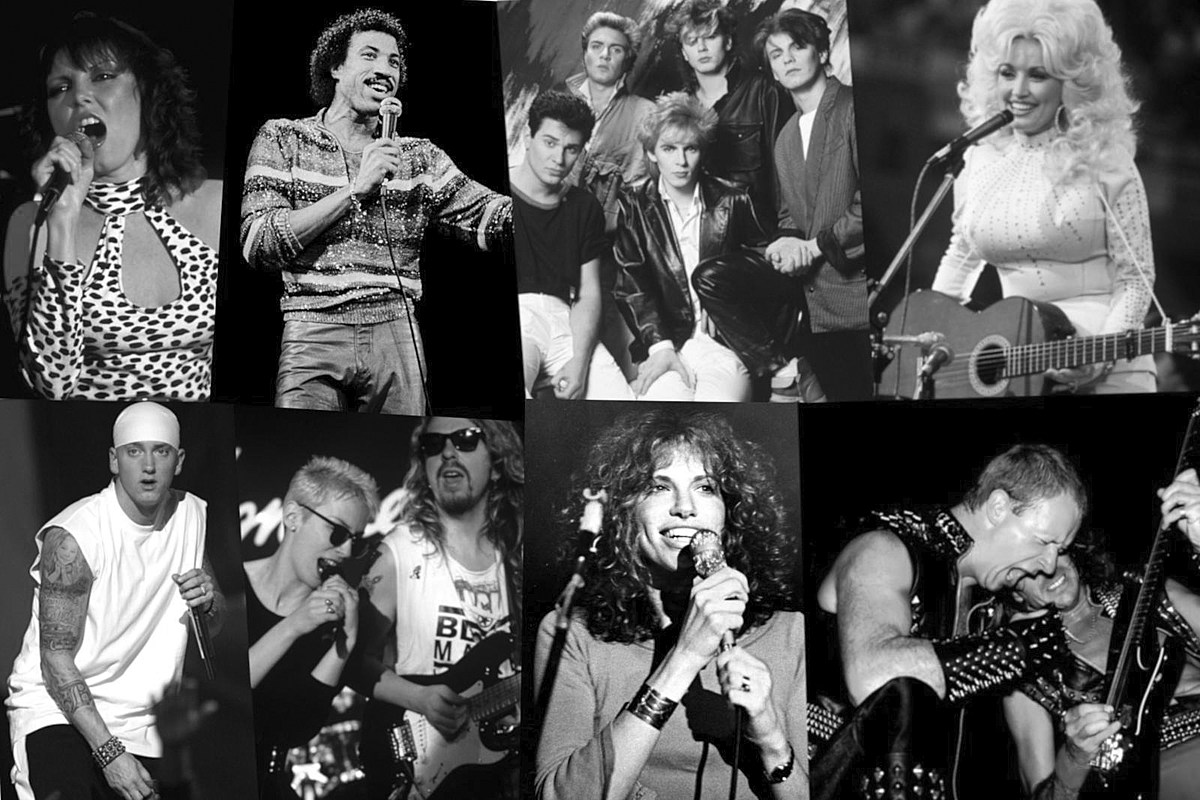 The Rock & Roll Hall of Fame’s 2022 class has been announced. Pat Benatar, Duran Duran, Eminem, Eurythmics, Dolly Parton, Lionel Richie and Carly Simon will be enshrined as performers, while Judas Priest get in thanks to the Musical Excellence Award.

As has become an annual tradition at UCR, we’ve asked our writers to weigh in on the latest group of inductees. Which inclusion was the biggest surprise? Who got snubbed? And what will the 2022 Rock & Roll Hall of Fame class be remembered for? These topics and more are tackled below.

1) Who is the most surprising inductee?
Michael Gallucci: Pat Benatar has never been a critical favorite, she doesn’t have enough of a musical identity to have influenced anyone who matters and her commercial presence didn’t even last a decade. So what is she doing here?

Corey Irwin: Judas Priest. Don’t get me wrong, it’s a pleasant surprise that they’re finally getting in, but I’d pretty much resigned myself to believe that one of the biggest acts in the history of metal would be eternally overlooked. That the Hall finally wised up and put them not only makes me happy, but it gives me hope that some other perennially ignored artists may still yet earn enshrinement.

Allison Rapp: Eminem surprises me slightly. I have no qualms with it — I’m a proponent of more rap and hip hop being included in the Hall, and few have made the kind of impact in that realm the way Eminem has — but given this was his very first year of eligibility, not to mention the purist responses that have arisen when rap names are listed on the ballot, I wasn’t sure how that would go over. It’s a nice surprise.

Bryan Rolli: Eurythmics. I know being a pop group doesn’t automatically preclude you from Rock Hall induction these days, but they only had three Top 10 hits in the U.S., and only one (“Sweet Dreams”) with any long-term cultural cache, if that’s what you want to call being a new wave compilation staple. It’s hard to believe they beat out Devo, Rage Against the Machine and six-time nominees MC5.

Matt Wardlaw: I’m happily surprised by the inclusion of both Eurythmics and Jimmy Jam and Terry Lewis. I think that in both cases these are artists that were making major contributions that helped to evolve what was happening musically as a whole.

2) Who is the most surprising exclusion?
Gallucci: I’m not surprised by any exclusions this year; the class, for the most part, landed pretty much exactly where I thought it would. Forced into an answer, I’d say Devo. The one complaint about this year’s inductees is that it’s safe, middle-of-the-road and expected. Where’s the one oddball inductee?

Irwin: I don’t get what Rage Against the Machine have to do. Their achievements and influence speak for themselves. Their members – OK, mainly just Tom Morello – have played nice, said all the right things and became involved in the Hall’s activities. As far as ‘90s acts go, they and Soundgarden (who were inexplicably left off the ballot this year) seem like the clearest no-brainers. Yet here we are, after Rage Against the Machine’s fourth nomination, and still no induction. I guess the Hall is just giving them something new to rage against.

Rapp: I do wish the New York Dolls had finally gotten their due. I think sometimes the Rock Hall’s focus can lean a little too heavily on the longevity aspect of artists’ careers, which means short-lived but highly influential acts, like the Dolls, sometimes get overlooked.

Rolli: Rage Against the Machine. They’re universally adored by critics, they sold millions of albums, they heralded a genuine sea change in heavy music in the ’90s and Tom Morello has an annoying, Dave Grohl-like omnipresence, all of which should have made them shoo-ins during their first nomination, let alone their fourth.

Wardlaw: Devo always seems like a safe bet and yet they never get in. When you’re thinking of artists who forged their original path, one would think that Devo would get in on several levels. I am also surprised about Rage Against the Machine for similar reasons. They seemed like an automatic shoo-in that would have the support of voters. A very surprising omission.

3) Who are you glad to see get in?
Gallucci: Why was Dolly Parton overlooked for so long? Her influence and legend were sealed years ago, yet year after year the Rock Hall somehow forgot to nominate her, despite the inductions of other “non-rock” artists … if that’s the argument you want to make for the exclusion.

Irwin: There’s no one on the list I’m unhappy to see get in. All of the inductees have had amazing careers and are deserving of the honor. In a strange twist, I think I’m happiest to see Dolly Parton get in, despite the fact I don’t think I’ve listened to any of her music. Instead, I’m a fan of Parton the cultural icon; the woman has used her fame and fortune to help charitable causes, championed racial inclusion, supported the LGBTQ+ community and even helped personally fund Moderna’s COVID vaccine. That’s a person I will joyfully celebrate any day.

Rapp: Carly Simon! To me, it always seemed odd that Joni Mitchell and Carole King had been acknowledged, but Simon hadn’t, even though she added something to the songwriting table that those two did not. Now it feels a bit more complete.

Rolli: It’s wonderful to see Duran Duran get their due after being written off as an empty-calorie pop band for years. Pat Benatar deserves her flowers, too, as one of the best rock vocalists in history (with a criminally underrated guitarist for a husband!). And this might get me crucified in some circles, but I’m thrilled to see Eminem get inducted in his first year of eligibility. As I’ve said before, no artist has ever blended rap and rock to such staggering commercial success, earning accolades from old-school institutions while gleefully skewering them.

Wardlaw: Duran Duran. They’ve taken a lot of critical knocks over the years, and for over a decade have had a great victory lap in progress, releasing fantastic new music along the way. This is a nice badge to flash at their critics. It’s good also to see Judas Priest get their due, although it’s curious why they had to shoehorn the band in via the “Musical Excellence” category instead of making them part of the regular inductees.

4) Who shouldn’t have made the inductees list?
Gallucci: As I mentioned above, Pat Benatar is this year’s weak link.

Irwin: As already mentioned, I think this year’s inductees are all deserving. But if there’s one head-scratcher in the class for me, it’s Carly Simon. Probably a reflection of my musical tastes, but I can only name a handful of her songs: “You’re So Vain,” “Nobody Does It Better,” “Mockingbird” … and I’m out.

Rapp: I don’t take issue with anyone on this year’s list. If you were to ask Dolly Parton this question, she’d say herself, but to me, this 2022 class seems sensible.

Rolli: Again, I just don’t understand how Eurythmics beat out so many equally deserving candidates off the strength of one cloying novelty hit.

Wardlaw: Some folks have been unhappy about Pat Benatar, but I think she more than deserves her spot here. The same can be said for the rest of the class. I think everyone on the ballot has relevance. If there’s one swap I could have made, it would be to put in A Tribe Called Quest first over Eminem.

5) What are your overall thoughts on the 2022 Rock and Roll Hall of Fame class?
Gallucci: It’s safe and unsurprising. None of the inductees, except for Pat Benatar and maybe Carly Simon, was unexpected. Even Judas Priest’s backdoor inclusion seems like a way of getting at least one metal act in the mix this year and a way to silence fans who bring up the issue year after year after year.

Irwin: It’s really strong. With Judas Priest’s inclusion, along with a large influx of female artists, this feels like an overdue mea culpa for the Hall’s past omissions. There will always be too many deserving nominees and not enough space. All of us can sit around and nitpick – personally, I would have made Eminem wait until his second ballot appearance – but in the end, there’s nothing substantial to argue about with this class.

Rapp: The reality of the Rock Hall is that only so many people can get in each year, and plenty of worthy names will inevitably be overlooked, but to me, this ballot is a pretty good example of what the Hall, in my mind, should represent: recognition of women, acknowledgment of various styles of music and how they’ve helped paint the bigger picture of what we call “rock ‘n’ roll.” This is a solid group of musicians with a diverse catalog to dive into.

Rolli: It’s … fine. This year’s nominee class was stacked, so there were bound to be some great artists who got shafted. My biggest gripe is that Judas Priest, one of the most influential metal bands in history, got relegated to a Musical Excellence Award while several decidedly non-rock artists (Dolly Parton, Lionel Richie, Eminem, Eurythmics) got inducted into the performer category. Even when the Rock Hall throws metal fans a bone, it still manages to fumble. Here’s hoping for an Iron Maiden induction within the next two presidential administrations.

Wardlaw: I’m really happy with it. There are so many here in the lineup that I wouldn’t have bet on. Eurythmics, to name one. It’s a delight that Dolly Parton got the nod, despite her initial wishes to not be included. The inclusion of Judas Priest seems to clear the way for Iron Maiden to be the next token metal band they will induct. Overall, for the artists that were left on the sidelines from this year’s list of nominees, what’s here will make for a good night of music.

Rambling speeches, fights between ex-bandmates and bad performances have marked many induction ceremonies over the years.

How Language-Generation AIs Could Transform Science