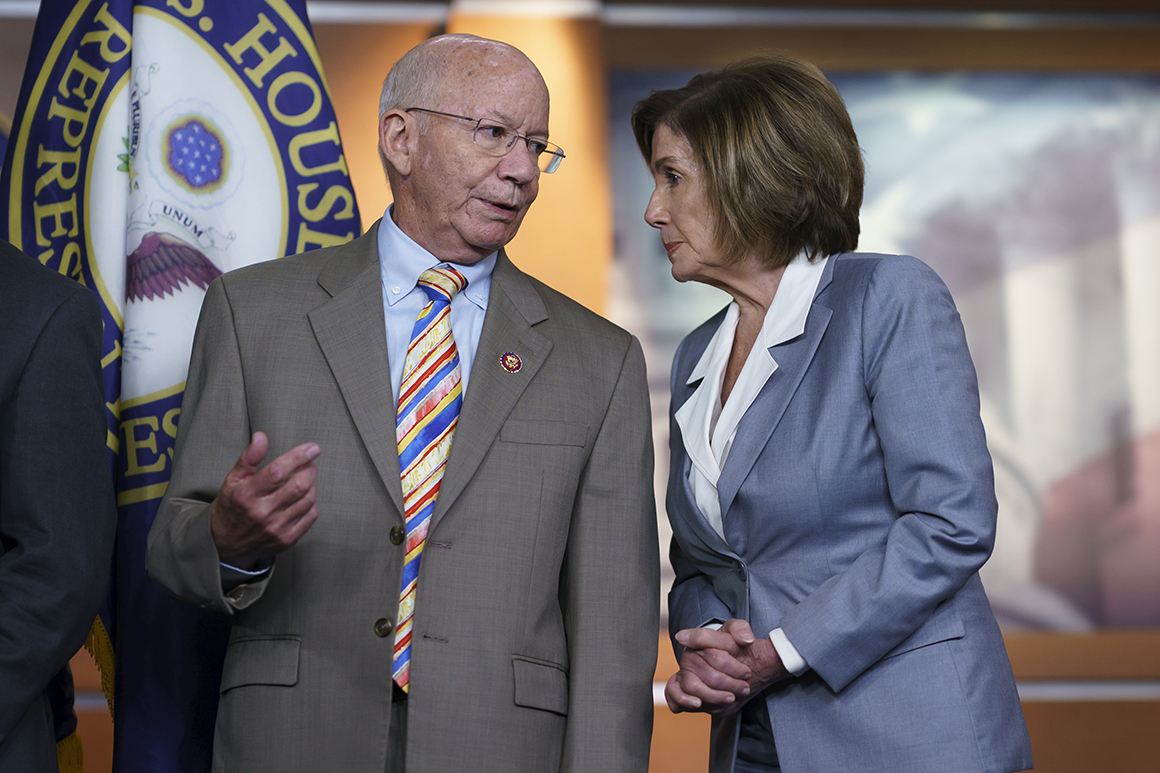 “It’s a strong job-creating package that seizes the once-in-a-century opportunity to rebuild America’s infrastructure,” Pelosi said at a press conference to tout the bill, flanked by committee chairs.

The bill comes before Congress every few years for these programs to be renewed, and so far has proceeded separately from Biden’s high-profile infrastructure talks. Though it’s not surprising that it’s being sucked up into the broader fray, where the legislative highway goes next is anybody’s guess. As top Democrats pitch a dual-track approach to infrastructure — a bipartisan deal alongside a monster party-line plan that goes beyond just roads and bridges — some Democrats are arguing that the transportation bill could present a new, third lane.

Pieces of the bill set to pass the House Thursday might have a better shot at becoming law as the infrastructure drama wobbles forward, some Democrats say, given that it comes with a Sept. 30 deadline to extend key surface transportation programs. Its emergence as an option marks the latest twist in months of convoluted talks about what a narrowly divided Congress can achieve on one of the White House’s top legislative priorities, and presents party leaders a way to maintain the aggressive July timeline they’ve been promising.

House Transportation Committee Chair Peter DeFazio (D-Ore.), who authored the bill, said Wednesday that he’s personally urged Senate Majority Leader Chuck Schumer to merge major parts of his measure, along with existing Senate work on a similar bill, into the Biden-endorsed bipartisan infrastructure deal. That agreement is still more of an outline than a formal piece of legislation, DeFazio noted.

DeFazio recalled to reporters that he told Schumer: “Well, it took my staff seven months to write the policy. I don’t know how quickly they can write policy over there. So I would suggest that you look at our policy and we adopt significant portions of those.”

That public push to inject central elements of his bill into the White House discussions represent a change of pace for DeFazio, who has spent weeks saying the broader talks were out of his purview and he was laser-focused on passing his own bill.

While the ostensible purpose of DeFazio’s legislation is to reauthorize existing programs that make up the majority of federal highway and transit funding, it does contain a number of new programs and policies, many of which line up with priorities in Biden’s original infrastructure plan — especially those intended to blunt climate change.

The Senate has done some work on a counterpart proposal, but it remains to be brought to the floor. If lawmakers from both chambers want to come together on a “conference committee” to mesh together its proposals, normally it would not happen until both chambers had passed related bills. But there are ways around that process — for instance, going to conference on a separate bill that is later replaced with the text that lawmakers are really considering, or a “ping pong” process where each chamber lobs proposals back and forth.

DeFazio said his bill could be merged with what work the Senate has completed on its surface transportation bill and the bipartisan deal in an “informal” conference between the White House, Senate and the House. For now, though, the bill’s path forward remains murky ahead of a hectic July in Washington.

Pelosi on Wednesday made a clear distinction between the transportation bill and the party’s broader plans to shepherd another big spending bill through the parliamentary thicket known as budget reconciliation, which allows it to sidestep a Senate GOP filibuster.

Asked about the party’s plans for that multi-trillion-dollar spending bill, Pelosi said: “That’s a different subject. That’s not an infrastructure question. That’s a budget question … that’s not necessarily infrastructure.”

The resulting muddled process has left some rank-and-file Democrats scratching their heads as they try to grasp what exactly they could be voting on in the next month and later into the fall.

There’s the bipartisan deal — which includes $579 billion in new spending on physical infrastructure but right now lacks legislative text — and then there’s the enormous reconciliation bill, which will likely take months until it’s ready to hit the floor.

Add to that the messy challenge of timing both bills in order to appease a fractious Democratic party: Pelosi reiterated on Wednesday that she wouldn’t bring the bipartisan bill or reconciliation bill to the floor until the Senate passes both of them.

If nothing else, Democrats say the transportation bill lays down a critical marker in the ongoing talks and offers an early preview of the party’s messaging push as they attempt to cling onto their majority in next November’s midterms.

Meanwhile, White House officials are working to keep all their options open. A group of Biden administration officials are making the rounds in the House this week in an attempt to reassure both progressives and moderates that the winding infrastructure plan can have a victorious off-ramp.

Officials from Biden’s legislative team will meet Wednesday with the moderate Blue Dog Coalition, after previous conversations with the Congressional Progressive Caucus and another centrist group, the New Democrat Coalition.

In the progressives’ meeting, White House counselor Steve Ricchetti and other administration officials reassured the Democratic lawmakers that Biden’s remarks over the weekend to mollify GOP negotiators didn’t signify a change in the planned two-track approach.

“The legislation needs to be linked. Conversations don’t have to be,” Rep. Ilhan Omar (D-Minn.) said in summing up the meeting.

The House will finish voting Thursday on the DeFazio-led bill, and several Republicans are expected to cross the aisle to support it.

Still, the GOP in general opposes the bill and rejects the premise that it is similar to the Senate infrastructure deal.

“This bill that we’re voting on and debating this week here in the House is not the bipartisan deal that President Biden was talking about,” Illinois Rep. Rodney Davis, a high-ranking Republican on the transportation committee, told Fox News on Wednesday.

“It’s a very partisan bill that puts most of the money in urban areas at the sacrifice [of] rural America and many of the areas that I represent,” Davis said.

James Bikales contributed to this report.