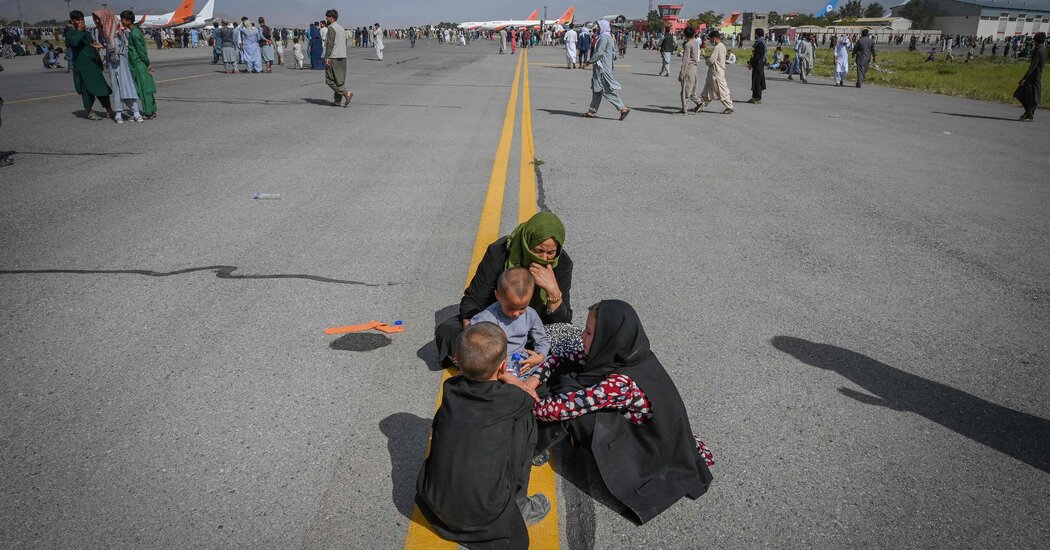 The crowds outside Kabul’s international airport swelled and swelled on Monday morning, leaving the fences and security forces straining to contain the mass of people desperate to escape Afghanistan as the Taliban took control.

They rushed through the perimeter of the airport’s civilian section and swarmed the tarmac. Soldiers stood guard, many with weapons drawn.

As flights prepared to depart, people clung dangerously to the sides of military planes even as one taxied down the runway.

As the chaos spread, U.S. troops took control of the airport’s civilian section, while people rushed through the boarding gates and tried to push their way onto two commercial planes that were parked beside the terminal.

With civilian air travel temporarily halted, the arriving and departing military planes underscored the stark divide between foreign nationals and some Afghans who were a flight away from safety, and many more who would have no escape.

But on Monday evening in Kabul, military as well as civilian flights were suspended, the Pentagon said.

The U.S. government said that in the coming days it would evacuate thousands of American citizens, embassy employees and their families, and “particularly vulnerable Afghan nationals.”

The desperation was evident as some people broke down in tears, recognizing that their chance of escape was slim. Reports of gunfire also circulated throughout the morning.

Although the Taliban has seized control of the country, there is no government in any real sense. That made it hard to get reliable information, both for people inside the country and the wider world watching the events unfold.

Video from journalists recorded sounds of gunfire at the airport as people ran across the tarmac and approached gates from outside. The local news media aired video of young Afghans clinging to a plane as it taxied. Apache helicopters flew low over the crowds to clear the way for military planes.

The Afghan Civil Aviation Authority said on Monday that all civilian flights in and out of the Kabul airport had been suspended because of the chaos. The agency urged people to not travel to the airport.

But the tracking site Flightradar24 reported that a Boeing 777-300 from Turkish Airlines had departed for Istanbul after five hours on the ground.

Twenty years after the United States invaded Afghanistan, the airport was the nation’s final redoubt, one of the last places in the capital not controlled by the Taliban. The State Department said all embassy personnel had been evacuated to the airport, where they were being defended by the U.S. military.

But for the thousands of others hoping to find refuge, there was no escape.

Witnesses said they saw a growing number of Taliban around the civilian side of the airport. They appeared to be clearing groups of people away, sometimes shooting into the air to get them moving.

Several witnesses said that the Taliban were now controlling access to entrances on the civilian side — allowing groups of people and vehicles to leave the airport but turning people away if they were trying to get in.

One international worker for a humanitarian group who was trying to get to the airport was told that no one would be allowed to leave the country now without permission from the “new government.”

Why We Need More Games Like Life Is Strange