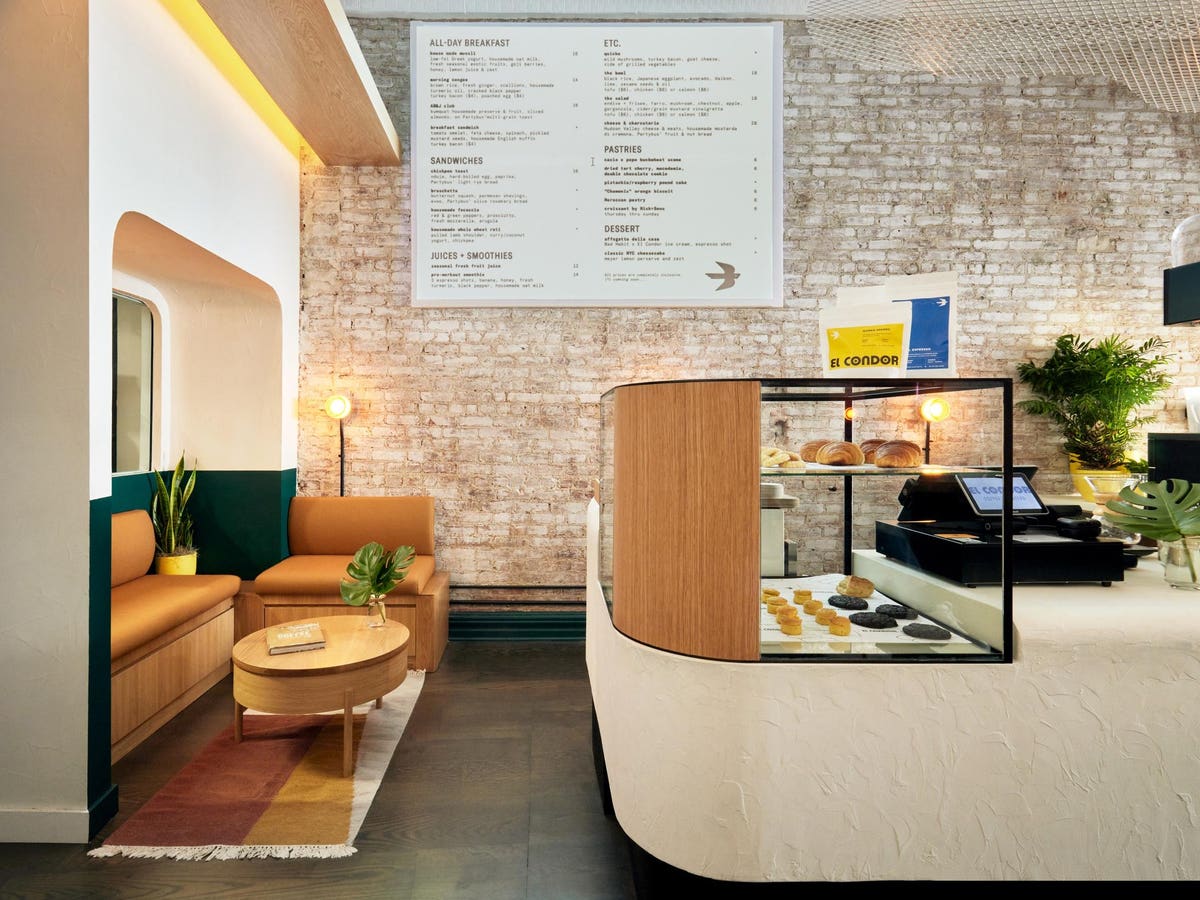 When a patron enters El Condor on Greenwich Avenue in the heart of the West Village, one is struck by the several elevated seats along the edge with Wi-Fi that resemble a hotel lobby, and then the comfy chairs in the back that make it look like a lounge, and the menu, which fits for a high-end coffee shop. Then in the evening, it offers a beverage menu of beers and wine.

El Condor is the latest version of a high-end coffee shop that functions like an office space, with food and drink options, and a rather sophisticated menu. It is owned by Wilcuma, a hospitality firm, whose owners are Nicolas Simon, who had worked at the Four Seasons Hotels and served as managing partner at several of chef’s Alain Ducasse high-end eateries in New York City (he’s a native of Toulouse, France) and Mucjon Demiraj, who hails from a real-estate background.

They are looking as this Manhattan location as a pilot, with more to come. Owner Simon says that the concept is flexible and could work as a stand-alone coffee shop, counter in hotel lobbies, kiosks in arenas, or museums.

In fact, Simon says he has a second outpost planned for New York City that will be opening in a museum, but won’t disclose where. Moreover they’re in negotiations for a Nashville outlet in the fall and close to signing a Houston lease for a 2023 opening.

To capitalize its initial endeavors, the duo raised $300,000 via equity crowdfunding, with a total of 128 investors. And the Nashville location will be funded mostly by a developer who wants to bring the amenity of a high-end coffee shop to his development.

Simon described the El Condor concept as an “all-day coffee shop, a place where everybody should feel comfortable walking into, to either grab your first coffee in the morning, come later to do some work, or for a quick lunch, and at the end of the day for a glass of wine when it’s time to unwind.”

The entire space in the West Village is 532 square feet, Simon said precisely, and it uses every foot of space including roasting its coffee in the downstairs area, with kitchen facilities in the back.

He named it El Condor because it suggests South America, where much of the coffee hails from, and also his dad was a huge Simon & Garfunkel fan, who liked their version of the Peruvian song El Condor Pasa.

Why did he want to move from the fine-dining eateries to a mid-priced coffee shop? What stood out to him about the high-end experience is “attention to detail. For me luxury is more about convenience, and making sure the guest has the proper experience.”

Asked how El Condor can compete with the slew of Starbucks in Manhattan and independents La Colombe, Gregory’s Coffee and Joe’s Coffee (to name a few), Simon replied, “The true competition is with ourselves and trying to do the best we can as a team.” He adds that “We are in the service business while all of the above have forgotten about that component,” though undoubtedly his rivals would dispute that point.

Simon says the service in his coffee shop is more “like a restaurant. We leave your tab open and check on you.”

Though El Condor only accommodates 18 people, during mid-day there are often three employees servicing them, and usually two at earlier and later times. One staffer is anchored behind the coffee machine, serving guests, and another handles take-out orders, app orders, pick-up and delivery.

Asked if he had WeWork in mind in El Condor’s design, Simon replied, “People are not going to the office as much anymore-so it’s nice to offer a welcoming, attractive space to work that is outside of their home and has delicious coffee and food options.”

Simon doesn’t care if someone sits with a cup of coffee for an extended period, but the coffee doesn’t come cheaply. It costs $4 a cup, rather pricey even for New York City. But Simon said the price includes sales tax and tipping since it has no tipping jar. He also noted that employees receive a certain percentage of revenue sharing to increase their hourly pay.

Much of the coffee served is a blend of beans, such as from Brazil and Sumatra, that is balanced and more moderate than a traditional espresso blend.

And the upscale menu isn’t cheap either. Most all-day breakfast items including house-made muesli and chickpea toast sandwiches cost $16, and a bowl of black rice, eggplant, and avocado $18, with most pastries costing $6 apiece.

But Simon says his prices are a tad higher than salad chains like Sweetgreen’s, where there is minimal service. “I consider it non-expensive. Where can you get lunch in this neighborhood or in New York, where you spend less than $25 or $30 for any dining option? It’s almost impossible.”

Its chef Youssef Aderdour is Australian who Simon said brings a variety of influences including “Italian, Greek, Asian, an interesting melting pot. It’s the theme we want to bring—delicious, fresh food that looks pretty on the plate and seasonal.”

Its beer and wine license were just approved, and it starts serving liquor at noon. Simon said it serves mostly local craft beers such as Gun Hill (the Bronx), Single Cut (Queens) and Grimme (Brooklyn) and white, red and rose wines from the Finger Lakes, Long Island and Hudson Valley.

But it doesn’t serve hard liquor, and “we’re not a cocktail bar,” Simon pointed out. One exception: it serves an EC Spritz with vermouth, cider and fresh grapefruit. It closes at 9 p.m. so he sees it as a “pre-dinner type of place.”

It also will have multiple revenue streams as it’s developing a cold brew with a co-packing company that will be sold at local grocery stores, in the near future.

Customer response on Yelp was extremely positive. Mandy said the “food presentation was served with stylish plates, and the staff was efficient and friendly. And owner Nicolas was working onsite passionately.” Kathryn noted that “the coffee is roasted on site, pastries are delicious with unique twists and my friend and I were able to hang in the corner and have a real catch-up.”

Simon called the three keys to its future success as: 1) Consistency in what it does including quality of the product and hospitality, 2) Maintaining its business and financial model including taking care of its employees, 3) Turning El Condor into a lifestyle brand covering the coffee experience, equipment, clothing, coffee with ice cream, etc.