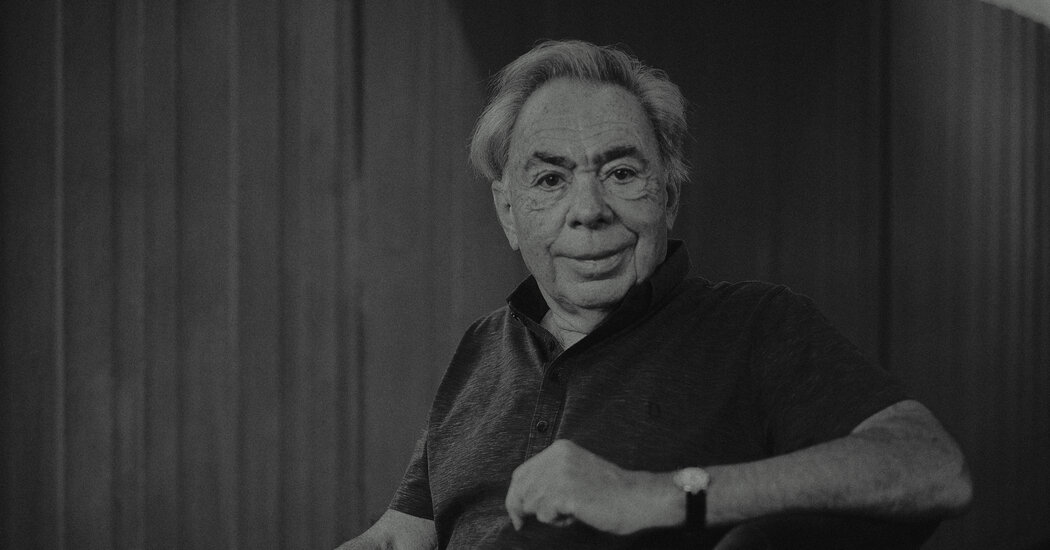 LONDON — Andrew Lloyd Webber, 73, has for decades been a household name in Britain for his flamboyant, quasi-operatic musicals. Now, he’s becoming known for something more unexpected: activism.

For over a year now, Lloyd Webber — who redefined musical theater with shows like “The Phantom of the Opera” and “Cats,” and served for years in the House of Lords — has been harassing Britain’s conservative government to get theaters open at full capacity, at times making scientifically questionable claims along the way.

This June alone, he made newspaper front pages here after pledging to open his new “Cinderella” musical “come hell or high water” — even if he faced arrest for doing so. (He quickly pulled back from the plan after learning his audience, cast and crew risked fines, too.)

He went on to reject an offer from Prime Minister Boris Johnson of Britain that would have let him do a trial opening of “Cinderella” without restrictions because it left other theaters in the lurch; take part in legal action against the government demanding it release results of research into whether coronavirus spread at cultural events; and to tell an interviewer he regretted caucusing with Britain’s Conservative Party when in the House of Lords because the party was now failing to support the arts and commercial theater.

“The way he’s done it is like something out of his musicals — it’s loud, it’s over the top,” said Arifa Akbar, the chief theater critic for The Guardian newspaper.

James Graham, a leading playwright (whose “Ink” played Broadway in 2019) said approvingly that Lloyd Webber had become “a big thorn in the government’s side.”

Theater has been one of the industries hit hardest by the pandemic. In New York, most Broadway theaters do not plan to reopen until September. In England, theaters have been allowed to open with socially distanced and masked audiences for brief periods, with the West End most recently reopening on May 17.

But Lloyd Webber has, impatiently at times, urged the government to provide clarity on when theaters can reopen at full capacity, complaining that they were forced to remain shut or enforce restrictions far longer than other businesses.

Now the government seems to be giving him the clarity he sought: it plans to lift most remaining restrictions on July 19.

“I never wanted, never intended to be the sort of spokesman for the arts and theater in Britain,” Lloyd Webber said in a recent interview at the Gillian Lynne Theater, where his musical “Cinderella” was in socially-distanced previews. “But there came this strange situation where nobody else seemed to be.”

Outside the theater, several theatergoers praised Lloyd Webber’s new role. “I’ve never been his biggest fan — I’m more a Sondheim fanatic,” said Carole Star, 70. “But if I see him tonight, it’ll be difficult not to hug him.”

“I could cry at what he’s done this year,” she added.

But others said they were glad he had pulled back from the threat to fully reopen before the government decided to allow it. “I admire his passion, but I hope he keeps things safe,” said Samantha Fogg, 25.

Lloyd Webber, who participated in vaccine trials, said he had been driven by “a real sense of injustice” that theater has been treated differently than other parts of British life. He complained that in June, tens of thousands of soccer fans were allowed in stadiums — “everybody singing completely pissed,” he said — while theaters could only open at limited capacity and amateur choirs were not allowed to sing indoors. (Scientists have been clear that outdoor events are far safer than indoor ones.)

The British government’s attitude to the arts was “dumbfounding,” he said.

But health officials are not impressed with a theater composer’s opinions on the safety of fully reopening.

In June, the British government released a report on a series of trial cultural and sporting events. The events, mainly held outside for people who could show that they had tested negative, only led to 28 potential coronavirus cases, it said, but the data had to be interpreted with “extreme caution.” And the study was conducted before the more infectious Delta variant began sweeping Britain.

The report “basically says everything’s completely safe,” Lloyd Webber claimed. But Paul Hunter, a British academic specializing in epidemics, said in a telephone interview the report did “not in any way” say it was safe to reopen indoor theaters. (He said he approved of the government’s plan to reopen at full capacity on July 19.)

When the pandemic first hit Britain, Lloyd Webber tried to show that theaters could reopen safely by adopting measures like those that were keeping his “Phantom of the Opera” running in Seoul. Those included requiring audience members to wear masks, doing temperature checks at the door and spraying theaters with disinfectant.

“I’ve got to say this is a rather sad sight,” Lloyd Webber said that day, as he looked out over a largely empty auditorium. “I think this amply proves why social distancing in theater really doesn’t work,” he added. “It’s a misery for the performers.”

That event didn’t lead to any major reopening of theaters, and Lloyd Webber said his frustrations grew as Britain let airplanes fly at full capacity, and people return to pubs, restaurants and garden centers with abandon. Last September, he sarcastically told a group of politicians that he had considered turning the Palladium into a garden center so it could hold performances again.

“I am absolutely confident that the air in the London Palladium — and indeed in all my theaters — is purer than the air outside,” he added, despite the growing scientific consensus that it was far safer to be outdoors than in.

Lloyd Webber’s breaking point came last December, he said, when theaters were allowed to reopen for a handful of performances only to be forced shut again as cases rose, even though shops were allowed to stay open. “You saw scenes of people literally cheek by jowl, no distancing, nothing,” he said.

“That’s the point I realized this government has no interest in theater,” he added. “Once I realize that, I didn’t see any reason to hold back.”

He later clarified that the government had been right to shut down theaters at that point (there were over 25,000 coronavirus cases in Britain on the day the West End shut, and in a matter of weeks they peaked at over 60,000). Lloyd Webber said he didn’t feel he’d ever called for reopening too early. “I think everybody thought things would get back earlier,” he said.

Other British theater figures, such as the producer Sonia Friedman, have also made headlines by urging the government do more for theaters, but none have garnered as much attention as Lloyd Webber, who along with being a composer, owns substantial real estate in the West End.

Lloyd Webber, whose personal wealth has been estimated at £525 million, reported that it was costing his company £1 million a month just to keep his seven theaters closed, and said that he had to mortgage his London home to raise funds. But he insisted money was not behind his advocacy. “My main concern is to just get everybody back to work,” he said.

“I don’t think money’s got anything to do with it,” Julian Fellowes, the creator of “Downton Abbey,” who wrote the book for Lloyd Webber’s “School of Rock,” said in a telephone interview, adding, “He’s a man on a mission and you can tell.”

But Lloyd Webber has not escaped criticism in his own community. In April, it was reported that the orchestra for “The Phantom of the Opera” in London would be slashed in half when it reopens, with percussion, harp and oboe replaced by keyboards.

Asked about this, Lloyd Webber said he was not the show’s producer, and pointed out that during lockdown he had recorded a set of orchestral suites that employed 81 freelance musicians.

Lloyd Webber remains an extraordinarily busy — or driven — man. As well as trying to produce and finish “Cinderella” — whose book, by Emerald Fennell, the director and screenwriter of “Promising Young Woman,” gives the fairy tale a contemporary twist — he has been involved in a £60 million refurbishment of the Theater Royal, Drury Lane.

Even as he explored old churches in Hampshire the other day, he said, he could not escape his newfound role in politics, saying that people would tell him, “We cannot believe that the government could have treated the arts in the way it has.”

But sometimes he clearly is happy to highlight it. When the government set the reopening date of July 19, Lloyd Webber wrote on Twitter that he would add a special “Freedom Day” performance and a gala with proceeds benefiting Britain’s health care system.

“I am thrilled,” he wrote, “that at last it seems theaters can finally reopen!”

Amazon to rival Nest Hub with its own radar sleep tracking?