The first head of the centre will be Chikwe Ihekweazu, currently director of the Nigeria Centre for Disease Control. 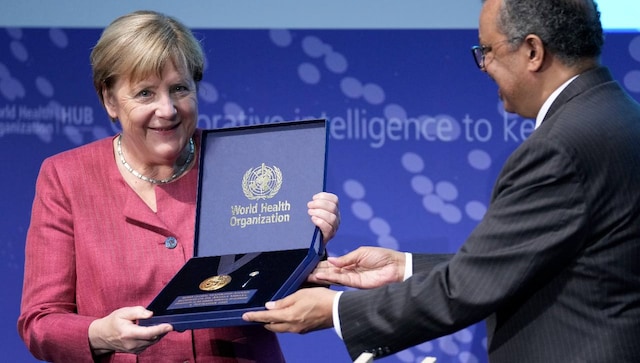 German Chancellor Angela Merkel, left, smiles as she receives the ‘WHO Global Leadership Award’ by Tedros Adhanom Ghebreyesus, right, Director-General of the World Health Organization (WHO), during the inauguration ceremony of the ‘WHO Hub For Pandemic And Epidemic Intelligence’ at the Langenbeck-Virchow building in Berlin, Germany, Wednesday, Sept. 1, 2021. (AP Photo/Michael Sohn, pool)

The World Health Organization on Wednesday launched a global data hub in Berlin to analyse information on emerging pandemic threats, filling the gaps exposed by COVID-19

The WHO Hub for Pandemic and Epidemic Intelligence was inaugurated in the German capital by Chancellor Angela Merkel and WHO chief Tedros Adhanom Ghebreyesus, who said it would fill “a gap in the world’s defences”.

pandemic is the defining crisis of our time it has taught the world many painful lessons. One of the most clear is the need for new powerful systems and tools for global surveillance to collect, analyse and disseminate data on outbreaks,” Ghebreyesus said.

“Viruses move fast but data can move even faster. With the right information, countries and communities can stay ahead of emerging risks and save lives,” he said.

The data hub, which has received initial funding from Germany, is set to bring together experts from various disciplines in Berlin to analyse data quickly in order to predict, prevent, detect, prepare for and respond to risks worldwide.

The hub will try to get ahead of the game, looking for early warning signs that go beyond current systems that monitor publicly available information for emerging outbreaks.

🎉 The WHO Hub for pandemic and epidemic intelligence is officially inaugurated by @DrTedros and 🇩🇪 Chancellor Merkel pic.twitter.com/Y7pbYTsnso

The first head of the centre will be Chikwe Ihekweazu, currently director of the Nigeria Centre for Disease Control.

Merkel said she hoped the new hub would help the world to be “better prepared for future epidemics and pandemics”, stressing that its findings would be shared with other countries.

“The pandemic has shown how much we can achieve if we really join forces. Experts all over the world have increased their knowledge at a really impressive speed and have also shared it again and again,” she said.

A team of international experts went to Wuhan earlier this year and produced a report with their Chinese counterparts that drew no firm conclusions on the origins of the virus.

Instead it ranked four hypotheses, deeming a jump from bats to human via an intermediate animal the most probable scenario, while a lab leak was seen as “extremely unlikely”.

But the investigation faced criticism for lacking transparency and access, and for not evaluating the lab-leak theory more thoroughly.

The experts’ report suggested the outbreak could have started as far back as September 2019, long before it was first detected in December 2019 in Wuhan.

“Despite decades of investment, COVID-19

has revealed the great gaps that exist in the world’s ability to forecast, detect, assess and respond to outbreaks that threaten people worldwide,” Michael Ryan, head of the WHO Health Emergencies Programme, said in a statement.

I Want My Daughter to Live in a Better Metaverse

Science Made Simple: What is Nanoscience?