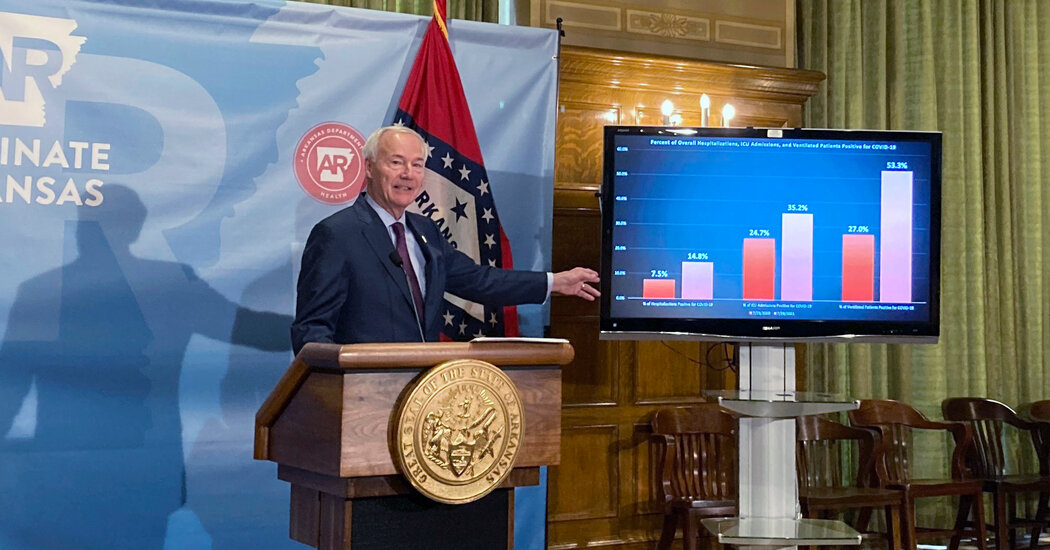 A judge in Arkansas on Friday temporarily blocked a ban on mask mandates, which will allow school districts and other government entities in the state to require face coverings to help curb the spread of new coronavirus infections.

Gov. Asa Hutchinson, a relatively moderate Republican who signed the ban into law in the spring, had been trying to modify it in recent days in the face of skyrocketing case counts. The daily average of new cases has reached two-thirds of the state’s highest peak, hit over the winter.

During a court hearing in Little Rock on Friday, Judge Tim Fox of the Pulaski County Circuit Court said that he would issue a preliminary injunction against the ban.

His ruling capped a week of high political drama in Arkansas, one of a number of states — including Florida, South Carolina and Texas — where conservative elected officials have prohibited mask mandates despite spikes in new cases driven by the highly contagious Delta variant.

The Arkansas law prohibits most government entities in the state from requiring masks. Mr. Hutchinson has said he regretted his decision to sign it, and convened a special session of the Republican-controlled legislature that began on Wednesday, asking lawmakers to change the law so that school districts could issue mask mandates.

The legislators declined to take action before ending the session on Friday morning.

Tom Mars, the lawyer who brought the lawsuit against the law on behalf of parents in the Little Rock school district, said that the judge’s ruling freed up Arkansas school districts and other government entities to issue mask mandates for the foreseeable future. Mr. Mars said it was not clear when the court might take up his request that the law be permanently blocked.

School districts in Little Rock and Marion, Ark., have filed a separate lawsuit challenging the ban.

In a phone interview, a state senator who sponsored the ban, Trent Garner, accused the judge of “legislating from the bench,” and said he was confident the ban would be reinstated on appeal.

A spokeswoman for the state attorney general’s office said officials were reviewing the judge’s order to examine their options.