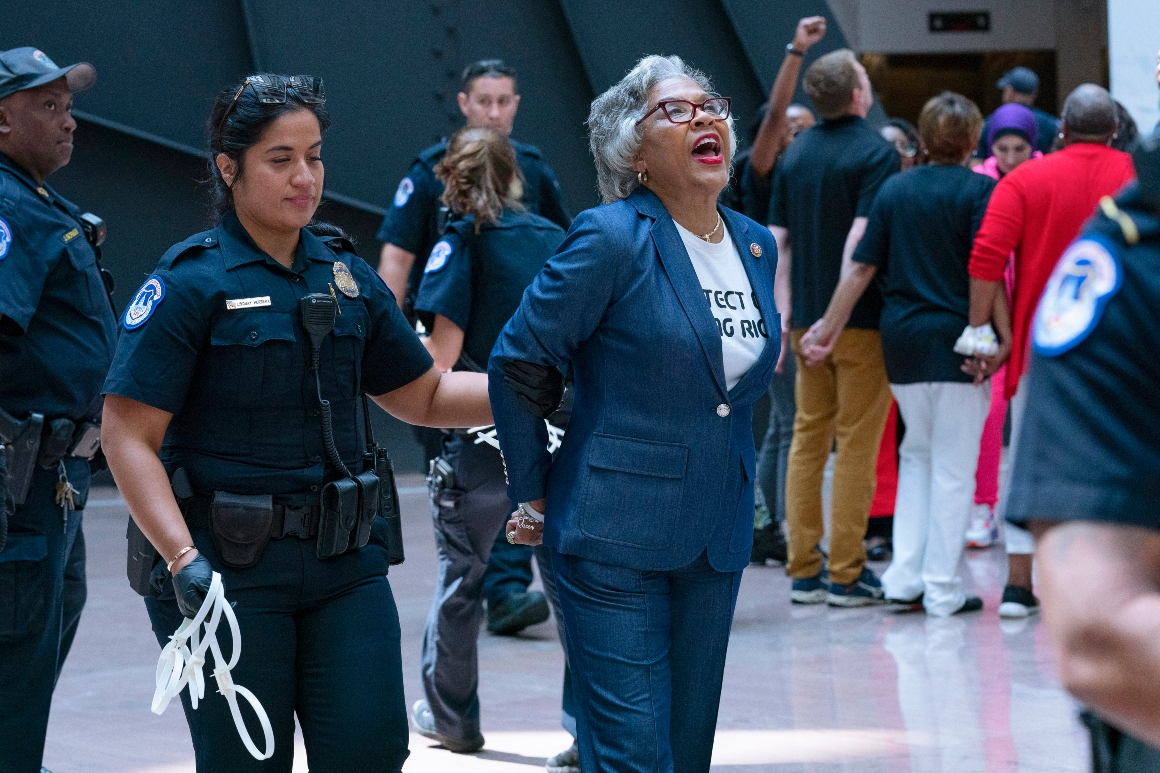 “Today, I stood in solidarity with Black women across the country in defense of our constitutional right to vote,” Beatty said in a statement later Thursday. “We have come too far and fought too hard to see everything systematically dismantled and restricted by those who wish to silence our voice.”

The Capitol Police said the group was arrested for violating a D.C. law that prohibits “crowding, obstructing, or incommoding.”

The buildings that make up the Capitol complex are still closed to most visitors, but members and staff can escort guests inside. The group had initially rallied near the Capitol at a church building as part of what participants billed as a “Day of Action on Voting Rights” with Black women leaders, allies and advocates urging the Senate to pass two key pieces of legislation — a sprawling Democratic election reform bill and the John Lewis Voting Rights Act.

The larger Democratic bill has mostly stalled out in Congress after Senate Republicans filibustered the bill. House Majority Leader Steny Hoyer said Thursday in a letter to House Democrats that the House would continue its work on the John Lewis-named voting rights legislation — a bill aimed at restoring a portion of landmark legislation struck down by the Supreme Court in 2013. That former legislation restricted certain states and localities, most in the southern U.S., forcing them to seek federal approval before changing certain voting laws. The legislation is a top Black Caucus priority, and the group has called on the House to re-introduce the bill before the August recess.

But it, too, faces a bleak future in the 50-50 Senate, where a previous version drew the support of only one Republican cosponsor, Sen. Lisa Murkowski (R-Alaska).

Arrests of members of Congress inside the Capitol complex are uncommon, though Rep. Pramila Jayapal (D-Wash.), was arrested during a 2018 protest in the Hart Senate Office Building as well.

Beatty herself is no stranger to protest. She and other officials were pepper-sprayed during demonstrations over the death of George Floyd in the summer of 2020.

TEAMGROUP Announces The MP34Q M.2 PCIe SSD Which Boasts A Capacity Of 8TB