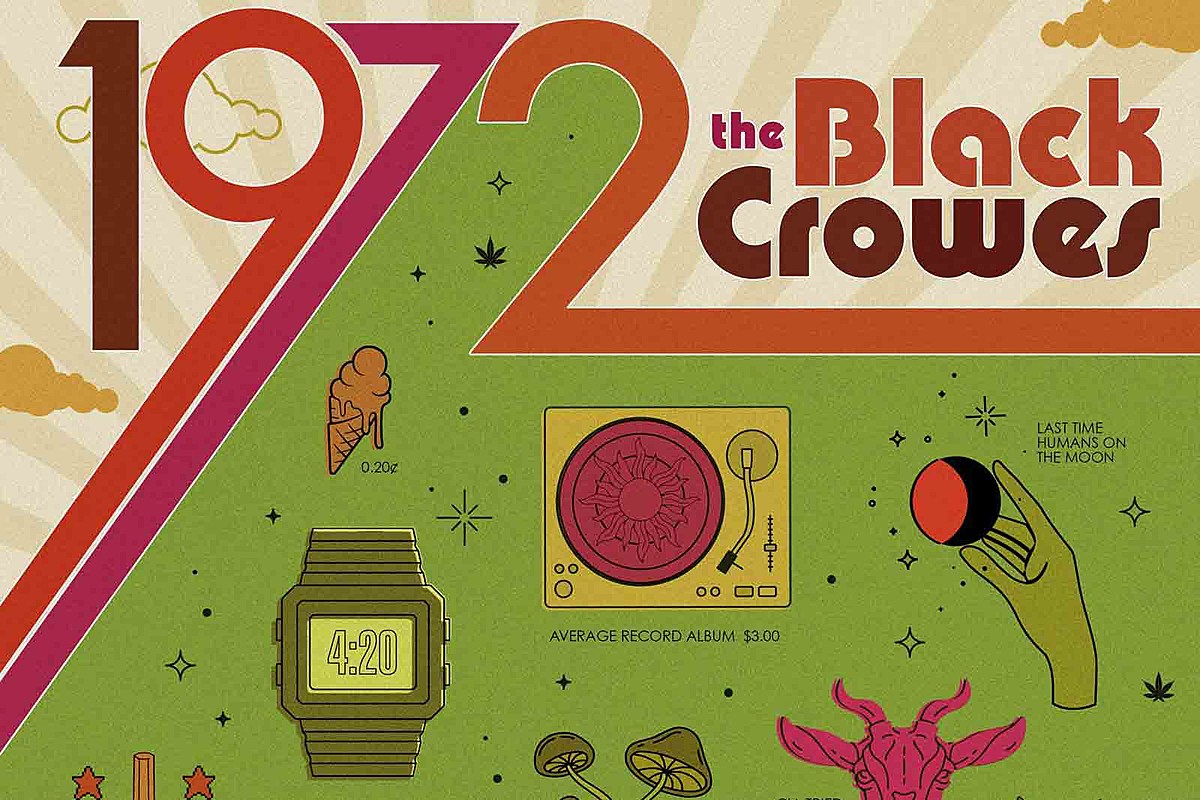 If any active band is fit to take a 50-year trip back in time, it’s the Black Crowes. After all, the Atlanta-formed group’s debut album, Shake Your Money Maker, was shaped as much by the rock, glam and R&B of 1972 as it was by anything surrounding the band in 1990. And it wore it well, as one of the songs on the Crowes’ 1972 EP says; brothers Chris and Rich Robinson and their bandmates pasted those influences on their musical sleeves, unapologetically and with gusto, and fused them with enough of their attitude to make it sound timeless rather than retro.

Having reactivated the band in 2019, the Robinsons’ first recordings with the Crowes’ new lineup puts the band in the way-back machine. 1972 delivers 2022 Crowes treatments of a half-dozen favorites of that year, choices that both make perfect sense – such as the Rolling Stones’ “Rocks Off” and Rod Stewart’s “You Wear It Well” – and raise eyebrows (the Temptations’ “Papa Was a Rollin’ Stone”) but in all cases sound like they had a helluva time taking them on. The sextet’s affinity for the material wins out, the Crowes’ genuine appreciation and respect for the material resulting in more than rote remakes.

“Papa Was a Rollin’ Stone” is the outlier, a Norman Whitfield suite whose carefully laid-out sonics hardly seem suited for a band of rowdy rockers. The Crowes’ version works, though – harder ‘n’ heavier, outfitted with funkier beat and piano, organ and guitars in place of the original’s lush string arrangement. Chris Robinson deftly works his way through the “hey mama” middle section that was originally done by five voices, and his harmonica break toward the end caps an original and wholly worthwhile take on the classic.

The rest of the EP is mostly faithful, with some different vocal phrasings and instrumental tweaks. There are no horns on “Rocks Off,” for instance, and the Crowes’ midsection breakdown is more grounded and less trippy than the Stones’ Exile on Main St. rendition. “You Wear It Well” substitutes organ for violin during the first solo, while versions of T. Rex’s “The Slider” and David Bowie’s “Moonage Daydream” replace glam with granite (no audible acoustic guitars on the latter, either), giving each a more forceful kind of impact.

Little Feat’s “Easy to Slip,” finally, is the unexpected gem, a deep cut sung by Rich Robinson, with a bit more of a Grateful Dead veneer amid the harmonies and country/Americana underpinning. It was an underappreciated track back in 1972 and shines on in loving hands 50 years later. We do hope for some brand new Black Crowes music – which both Robinsons have indicated is likely. Until then 1972 is a welcome placeholder, an inclusive and engaging party that opens up a little more of the Crowes’ rock ‘n’ roll heart.