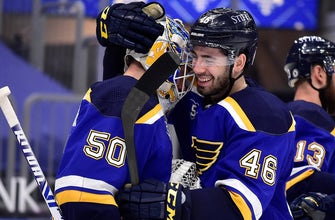 ST. LOUIS — Jordan Binnington made a season-high 50 saves to help the St. Louis Blues snap a seven-game skid a 3-1 win over the Vegas Golden Knights on Wednesday night.

“That was an embarrassing time losing so many games in a row,” Tarasenko said. “We’ve got many games against some tough opponents right now. Obviously we’re fighting for the playoffs, but our goal is to go on a winning streak so there’s no need to talk a lot about this game.”

“I didn’t know that actually until I got in here,” Binnington said about his 50 saves on the night. “We competed and did a good job keeping them to the outside and clearing out rebounds.”

Marc-Andre Fleury made 32 saves while losing his third straight start.

“You can’t really spot them two goals early,” Vegas center Mark Stone said. “We blew them out in their building on Monday. It’s naive for us to think they’re not going to come out and give us their best game.”

Tarasenko scored his third goal of the season 48 seconds into the contest to give St. Louis an early lead.

“It’s nice to score at the start of the game,” Tarasenko said. “I had a big break without hockey and am still trying to get my timing back.”

Blais scored 7:21 into the first when he roofed a feed from David Perron over Fleury’s glove for his fourth goal of the season to make it 2-0. Blais had been a healthy scratch for St. Louis’ previous three games.

Walman scored his first NHL goal to add some insurance with 6:27 remaining in regulation to make it 3-0.

“I kind of blacked out a little bit, but it was a great play by our forwards to get the puck deep in the zone,” Walman said. “(Jordan) Kyrou made a good pass off the pad I guess, and it came right to me and I was fortunate enough to put it in the net.”

Nicoals Roy spoiled Binnington’s bid for his ninth career shutout when he scored his second goal of the season with 4:16 to go.

“It’s the time of year where you’ve got to have different guys contribute every night,” Vegas coach Pete DeBoer said. “We got a fourth line goal tonight which was big. We knew St. Louis was going to be really good.”

Binnington after the 3-1 win over Vegas: “The boys fought hard all the way through. …Yea, we’re coming.”#stlblues pic.twitter.com/KkAewevENo

Kyle Clifford and Ryan Reaves dropped the gloves midway through the first period. It was Clifford’s team-leading fourth fight of the season.

“It’s always tough missing a guy like that,” Vegas defenseman Shea Theodore said. “I think at the end of the day it’s more opportunity for ice time I guess. I think the back end we each have to step up when we have a guy like that out.”