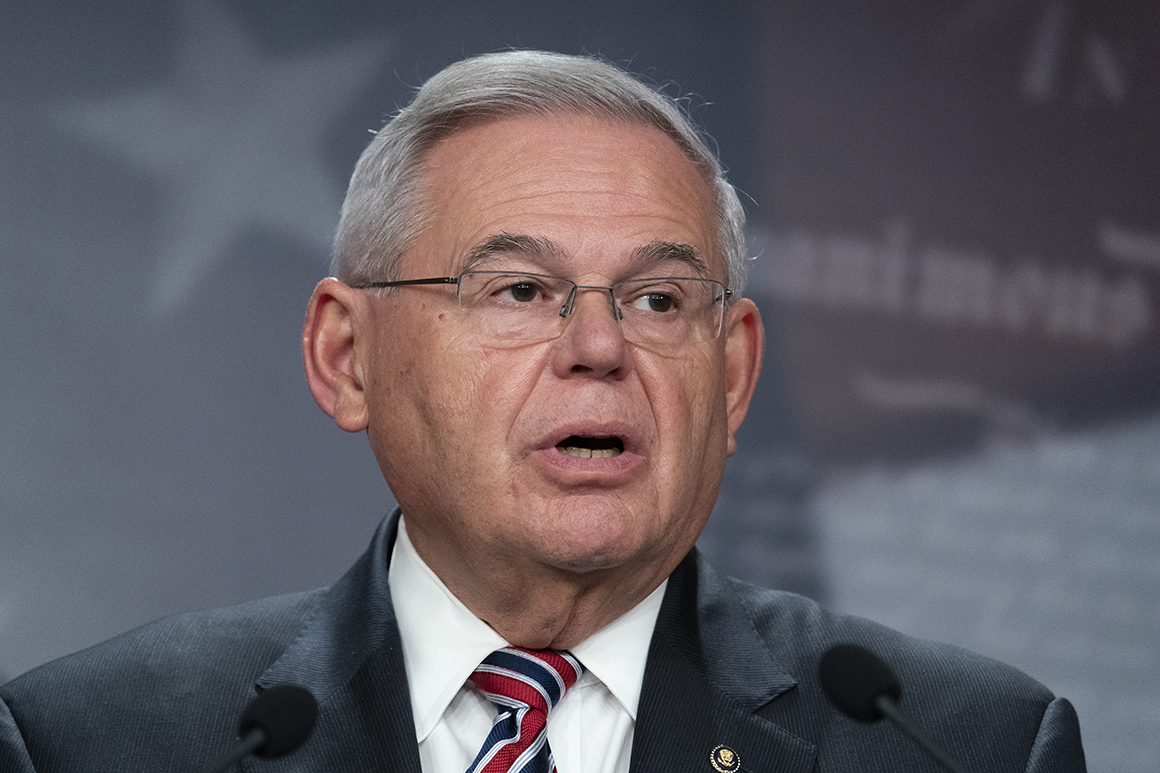 It wasn’t for lack of trying that the House and Senate left stringent penalties for a Russian invasion of Ukraine off the table. Partisan squabbling over the annual defense bill left congressional negotiators with little time to finish up the legislation before the end of the year.

The Senate was on track to vote on two amendments to the National Defense Authorization Act last week that would have imposed harsh sanctions on Russia — one offered by Menendez that would effectively cripple the Russian economy if Putin moved into Ukraine, and another by his GOP counterpart on the committee, Sen. Jim Risch of Idaho, that would have sanctioned the gas pipeline running from Germany to Russia known as the Nord Stream 2 pipeline.

But some Senate Republicans objected to the final list of amendments slated to receive a vote on the Senate floor, causing Democratic leaders to abandon the traditional process and rely on the House and Senate Armed Services committees to hammer out a consensus bill. That meant that proposals like Risch’s and Menendez’s, which never received a vote in either chamber, were left on the cutting-room floor.

“I don’t know what they had to do to move NDAA along,” Risch said in a brief interview. “It would have been nice to have this in it.”

The Menendez plan would have imposed “the mother of all sanctions … the likes of which we have never seen before,” the New Jersey Democrat said at a Foreign Relations Committee hearing later Tuesday.

And Risch’s amendment — which was included in the package proposed by Senate leaders last week — would have given Congress the power to overrule the administration on sanctions for Nord Stream 2. Democrats initially blocked a vote on Risch’s amendment, prompting allegations from Republicans that they were afraid of a politically uncomfortable vote; Senate leaders eventually included it in the final amendment package, but Sen. Marco Rubio (R-Fla.) did not allow the votes to move forward over a dispute about a separate amendment to crack down on China.

“Republicans had plenty of amendments they could have had, but because they didn’t get them all, then we end up with none,” Menendez said. “And trying to work it in as something that wasn’t in either original bill was a challenge that we couldn’t achieve.”

A frustrated Sen. Jeanne Shaheen (D-N.H.), who is banned from Russia because of her hawkish posture toward Moscow, said that “we would have had a chance” to prescribe specific penalties for a Russian invasion of Ukraine, but that Republicans “have taken the position that if they don’t get their way on the NDAA, they’re going to hold it up for everything.”

Shaheen, alongside Sen. Rob Portman (R-Ohio), led the effort to boost funding for the Ukraine Security Assistance Initiative. The compromise NDAA unveiled on Tuesday authorizes $300 million for the fund, $50 million more than what Biden requested, including $75 million for lethal aid.

That provision on its own sends a strong message about the U.S. commitment to Ukraine’s security, Sen. Chris Murphy (D-Conn.) said.

“I don’t think there’s any doubt that if Russia proceeds to an invasion, there’s going to be devastating sanctions, supported by Republicans and Democrats,” Murphy said. “I’m not sure how necessary it was for us to do it in the NDAA, given how certain it is that those sanctions would be forthcoming if an invasion happens.”

Earlier Tuesday, Biden and Putin spoke via secure video call for two hours amid concerns from the U.S. and its European allies that Putin is positioning Russian troops for a possible invasion of Ukraine. During the call, according to a White House readout, Biden warned Putin that “the U.S. and our allies would respond with strong economic and other measures in the event of military escalation.”

In a press briefing following the call, Biden’s national security adviser, Jake Sullivan, declined to elaborate on the types of economic sanctions that Biden detailed to Putin, but said they would be more severe than those that were imposed after Russia’s 2014 annexation of Crimea.

Republicans see that as empty rhetoric. Sen. Ted Cruz (R-Texas) said Putin felt emboldened by Biden’s decision to waive sanctions on Nord Stream 2. Cruz has been holding up Biden’s foreign-policy nominees over the administration’s posture on the pipeline project, which is effectively complete and, the U.S. believes, will be a massive financial boon for Putin.

“This calamitous foreign policy disaster is Joe Biden’s fault,” Cruz said of Russia’s military buildup. “This is the direct consequence of Joe Biden’s surrender to Vladimir Putin on Nord Stream 2.”

Connor O’Brien contributed to this report.