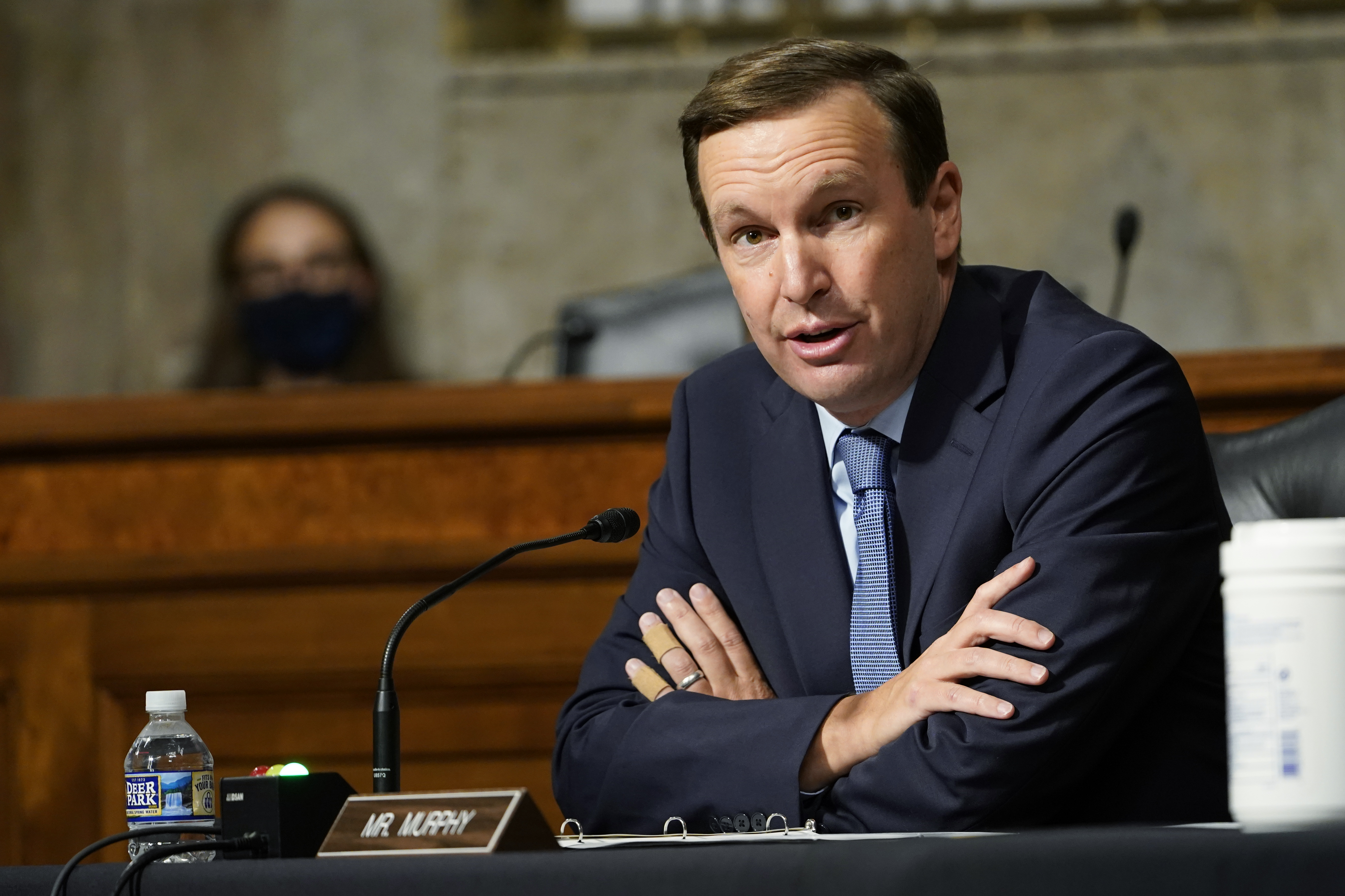 “It’s time for more urgency from the administration as the gun violence epidemic gets worse by the day,” Murphy said in an interview this week. “A lot of us know that the president’s heart is in the right place and we’ve been really patient with his team.”

Murphy is leading a brigade of lawmakers and advocates pressing Biden to take unilateral action on guns. In a March 25 letter, previously unreported, Murphy and 127 other Democratic lawmakers demanded that Biden move expeditiously on three fronts:

— And name a new nominee to lead the Bureau of Alcohol, Tobacco, Firearms and Explosives.

— Finalize a regulation to crack down on so-called ghost guns before Democrats potentially lose control of Congress.

It’s been a year to the day since Biden gave his first White House address on gun violence prevention, announcing what is viewed as his most significant executive action to date on guns from the Rose Garden. But a year later, the ATF regulation he unveiled, which would impose background checks and new requirements for online sales of “ghost guns” — untraceable firearms that lack serial numbers and are constructed from online kits — hasn’t been finalized.

The White House has said the rule will be finished this month and a source familiar with the administration’s planning said an announcement on the regulation is expected as early as Monday. Some Democratic lawmakers have been invited to a Monday event with the president on “gun violence reduction,” according to a Hill aide.

Though Murphy has been in frequent touch with White House officials about gun safety, he hasn’t received a response to the missive, just an acknowledgment of receipt. Meanwhile, gun homicides continue to accelerate. On Sunday, six people were killed in a mass shooting in Sacramento, Calif.

With seven months until the midterms, and an expected shift in control of at least one chamber to Republicans, Democrats are increasingly turning to the White House for answers. GOP opposition to major gun control legislation makes executive actions one of the few tools left to Biden.

Democrats and gun control advocates argue that their voters need to see some sign of progress before the election — and executive actions like expanding background checks and installing a director of gun violence could help motivate them to turn out at the polls.

Biden has sought to tackle the rise in crime and gun violence with what the White House describes as a holistic approach: Increasing funding for cops, bolstering community violence prevention programs and removing violent offenders from the streets. But key to those efforts, lawmakers say, is having a permanent ATF director, whose job responsibilities include cracking down on illegal and trafficked guns.

POLITICO reported this week that Biden is expected to announce a new nominee to lead the ATF as soon as this month after his first pick, David Chipman, failed to secure enough support in September.

“Many of us have been willing to have patience when it comes to the ATF director and the regulatory process but I don’t have the luxury of patience any longer,” he said.

Murphy has also changed his mind about a proposal to name a gun violence prevention czar. Six months ago, the senator was sympathetic to the White House argument that it was unnecessary and that the issue could be handled by the Domestic Policy Council led by Susan Rice. Now, he thinks that won’t cut it.

“The President should think seriously about a specific, high-level experienced individual to oversee anti-gun violence policy,” Murphy said. “I don’t know that there’s a lot of evidence that the current structure is delivering results.”

A number of gun safety organizations agree: They’ve pressed the administration since Biden took office to create such a position, and now Democratic lawmakers are increasingly getting behind the idea.

House Democrats led by Reps. Joe Neguse of Colorado and Lucy McBath of Georgia are circulating a new letter to send to Biden asking him to create an interagency task force to prevent gun violence and to appoint a director of gun violence prevention to lead it, according to a Democratic aide. The new appointee would help coordinate anti-gun violence efforts across the federal government, with the goal of reducing firearm deaths by half over the next decade.

“There’s no doubt we need stronger leadership that’s focused on reducing gun violence, including an effective ATF director and executive action to crack down on ghost guns,” Sen. Elizabeth Warren said in a statement to POLITICO when asked about Biden’s actions to date.

The White House pushed back on the idea it’s moving at a slow pace, arguing that Biden has taken more executive actions on gun violence than any prior president.

“The Biden administration has made historic progress, which I would stack up against any previous presidency,” said Stefanie Feldman, deputy assistant to the president and senior adviser to the director of the Domestic Policy Council.

Feldman defended the White House’s strategy of deploying the DPC to coordinate the administration’s gun policies — “interagency task force is a fine word for it,” she said.

“There are no policies that are going at a slower pace because of the structure we have now or that would be going at a faster pace if we had a different structure,” she said in an interview Friday. “We wake up every day feeling the urgency of this issue.”

In addition to the ghost gun rule, Biden has focused on violence intervention programs, securing $50 million for them in a March-passed bill to fund the government. That same bill included a $47 million funding increase for the ATF. Biden has also created “strike forces” at the Justice Department to crack down on illegal firearms trafficking, but advocates say it’s unclear what progress has been made. In February, on his way to New York City to highlight his gun violence prevention efforts, Biden and the DOJ also launched an initiative to train a national team of prosecutors to charge people who use ghost guns in crimes.

Democratic lawmakers largely believe Biden is committed to the issue, but they want to see him use the full breadth of his powers.

“Action right away is critically important, because some of these executive orders will be challenged in the courts,” said Sen. Richard Blumenthal (D-Conn.). “The more time that passes before he issues them, the longer it will take for them to help save lives.”

Feldman did not answer specific questions about future executive orders but said that the White House is pursuing a range of measures as it works to determine Biden’s legal authority.

In particular, Democrats like Blumenthal and Murphy are worried that the longer the ghost gun rule takes, the more likely a future GOP majority in Congress will use the powers of the Congressional Review Act to revoke it. Similarly, once the rule is enacted, it’s expected to face challenges from GOP-led states that have made their opposition known. Some advocates pinned the holdup on acting ATF head Marvin Richardson, but the White House contends it’s moved faster on the ghost gun regulation compared to others.

On Friday, advocacy groups March for Our Lives, Guns Down America and Change the Ref will issue a report card on Biden’s work to combat gun violence, giving him a D+ overall.

Some Democratic lawmakers, however, say Congress — not the president — is to blame. House-passed gun control bills have stalled in the Senate, where a majority of Democrats complain the party missed an opportunity to scuttle the filibuster to move Biden’s agenda. Efforts in the chamber to find a long-shot compromise to strengthen background checks have also fallen apart. As Republicans oppose Biden’s legislative proposals to reinstate the assault weapons ban or remove limits on lawsuits against gun manufacturers, they’ve attempted to pin a rise in crime on Biden and Democrats ahead of the November election.

Rep. Madeleine Dean (D-Pa.) praised the administration for crafting model legislation for states to implement “red flag” laws, which allow courts to bar people who present a danger to themselves or others from accessing a firearm.

Gun deaths hit a record high in 2020, the most recent year for which data is available — up 14 percentage points from the year prior. Some 45,222 people died from gun-related injuries with suicides accounting for more than half, according to a Pew Research accounting of federal data.

“Over the last year and half we haven’t had a Sandy Hook or a Las Vegas or an Orlando,” Murphy said. “But the absence of the 25- or 50-person mass shooting doesn’t mask the fact that daily gun murder rates are exponentially higher than they were before for the pandemic.”

“I don’t know why we don’t have outrage about that and that outrage needs to come not just from me and from anti-gun violence groups,” he said. “It needs to come from the administration.”

Nicholas Wu contributed to this report.