Barranquilla, the capital of the Atlántico department in northwest Colombia, is featured in this image taken by the Copernicus Sentinel-2 mission.

Barranquilla, visible in grey at the top of the image, covers an area of around 155 sq km and is the fourth-most populous city in Colombia after Bogotá, Medellín and Cali. The city of Barranquilla serves as a major trade centre for Colombia, housing the largest port along the Caribbean Sea. Thanks to this famous port, Barranquilla earned itself the nickname ‘Colombia’s Golden Gate’ (or La Puerta de Oro de Colombia in Spanish).

The city lies strategically next to the delta of the Magdalena River, one of the main rivers in Colombia, flowing northwards for around 1500 km through the west half of the country before emptying into the Caribbean Sea.

Owing to large quantities of sediment, as seen by the extensive sediment plume at its mouth and the brownish colour of its waters, the Magdalena requires frequent dredging of its main channel to allow access to Barranquilla’s port for oceangoing vessels. This image, captured in March 2021, was taken just before the onset of the rainy season, which starts in April.

The urban area of Barranquilla, with airport runways visible south of the city, contrasts with the Ciénaga Grande de Santa Marta swampy marshes to the east visible in dark green. Selected as a Ramsar Site of International Importance, the site is important for its mangrove ecosystem, which is the largest on the Caribbean coast of Colombia. It also serves as habitat and winter breeding ground for several bird species. 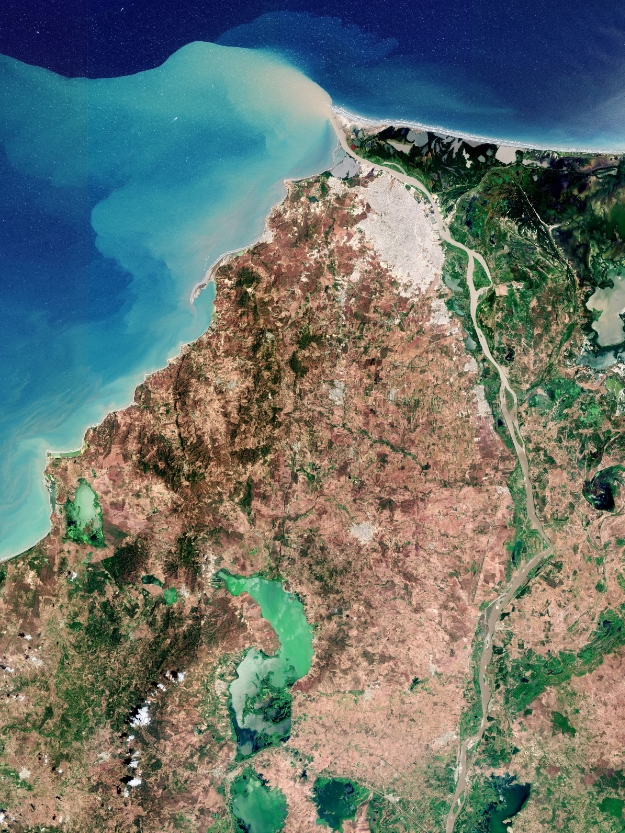 Other notable features in the image include the El Guajaro Reservoir, around 50 km southwest of Barranquilla. The reservoir was created by the union of seven smaller swamps in the area to supply water for agricultural irrigation. In addition to sewage discharges, the reservoir receives agricultural runoff, particularly during the rainy season, which leads to states of eutrophication in the water that are accompanied by blooms of harmful microorganisms, otherwise known as cyanobacteria.

These types of algae, which are commonly present in freshwater and saline ecosystems, are most likely why the lake appears in emerald green in today’s image. Satellite data from the Copernicus Sentinel-2 mission can track the growth and spread of harmful algae blooms in order to alert and mitigate against damaging impacts for tourism and fishing industries.