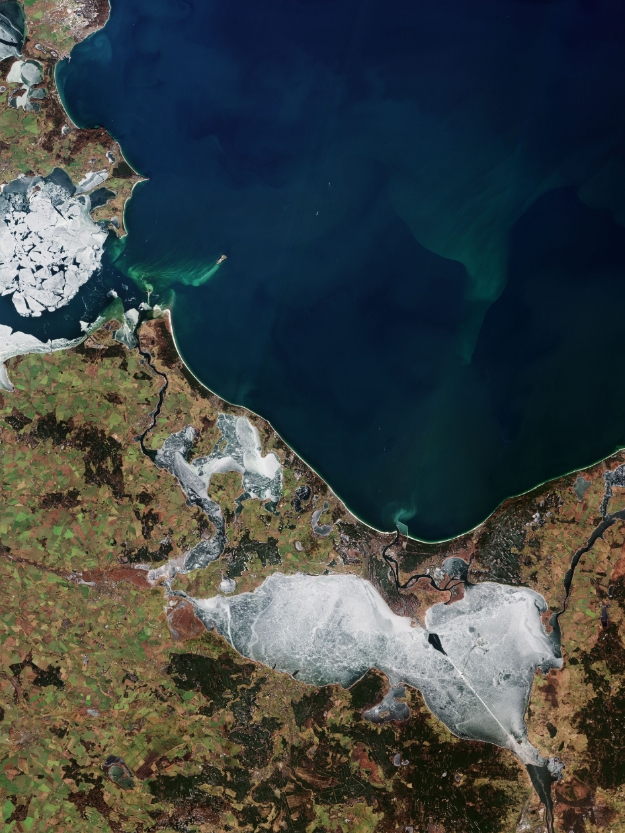 Part of Mecklenburg-West Pomerania, also known as Mecklenburg-Vorpommern, a state in northeast Germany is featured in this image captured by the Copernicus Sentinel-2 mission.

A portion of the northwest coast of Poland can be seen in the right of the image.

Mecklenburg-West Pomerania extends along the Baltic Sea coastal plain with the region’s landscape largely shaped by glacial forces – which deposited materials that produced the coastal lowlands that are today filled with wetlands, streams and lakes.

Mecklenburg-West Pomerania is one of Germany’s least populated states. Nearly two-thirds is covered by farmland with the main crops being rye, wheat, barley and hay. The green areas present in this image are most likely winter wheat and winter rapeseed. The region’s pastures typically support sheep, horses and cattle.

On the state’s coastline on the Baltic Sea lie many holiday resorts, unspoilt nature and the islands of Rügen (partly visible in the top left) and Usedom (in the centre of the image), as well as many others. The most populous island in the Baltic Sea, the 445 sq km island of Usedom is mostly flat and is partly covered by marshes.

The icy Szczecin Lagoon, or Szczeciński Lagoon, dominates this week’s image, which was captured on 22 February 2021. An extension of the Oder estuary, the lagoon is shared between Germany and Poland, and is drained (via the Świna, Peene, and Dziwna rivers) into Pomeranian Bay of the Baltic Sea, between Usedom and Wolin.

From the south, it is fed by several arms of the Oder River, Poland’s second-longest river, and several smaller rivers. The distinct line across the lagoon depicts the shipping waterway that connects the port cities of Świnoujście and Szczecin.

Several emerald-green algae blooms can be seen in the image, with the most visible near Peenestrom, an arm of the Baltic Sea, in the left of the image. Peenestrom separates the island of Usedom from the mainland and is an important habitat for waterfowl, especially because of its fish population, such as white-tailed eagles and herons.

The Baltic Sea is no stranger to algae blooms, with two annual blooms taking place each year (the spring bloom and the cyanobacterial bloom in late spring.) Given this image was captured in February, it is most likely an onset of a spring bloom.

Although algal blooms are a natural and essential part of life in the sea, human activity is also said to increase the number of annual blooms. Agricultural and industrial run-off pours fertilisers into the sea, providing additional nutrients algae need to form large blooms.

Sentinel-2 is a two-satellite mission to supply the coverage and data delivery needed for Europe’s Copernicus programme. The satellites are able to systematically map different classes of land cover such as forest, crops, grassland, water surfaces and artificial cover like roads and buildings. This kind of information can benefit a multitude of applications.