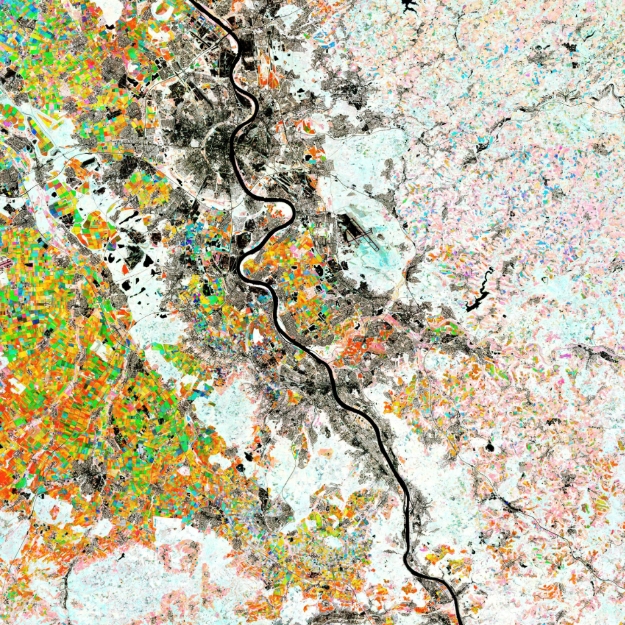 The Rhine River, the longest river in Germany, is featured in this colourful image captured by the Copernicus Sentinel-2 mission.

Along this river lies the city of Bonn: the host of this year’s Living Planet Symposium – one of the largest Earth observation conferences in the world – taking place on 23-27 May 2022.

The Rhine River, visible here in black, flows from the Swiss Alps to the North Sea through Switzerland, Liechtenstein, Austria, France, Germany, and the Netherlands. In the image, the Rhine flows from bottom-right to top-left. The river is an important waterway with an abundance of shipping traffic, with import and export goods from all over the world.

The picturesque Rhine Valley has many forested hills topped with castles and includes vineyards, quaint towns and villages along the route of the river. One particular stretch that extends from Bingen in the south to Koblenz, known as the Rhine Gorge, has been declared a UNESCO World Heritage Site (not visible).

Cologne is visible at the top of the image.

Each colour in this week’s image represents the average NDVI value of an entire season between 2018 and 2021. Shades of red depict peak vegetation growth in April and May, green shows changes in June and July, while blue shows August and September.

Colourful squares, particularly visible in the left of the image, show different crop types. The nearby white areas are forested areas and appear white as they retain high NDVI values through most of the growing season, unlike crops which are planted and harvested at set time frames. Light pink areas are grasslands, while the dark areas (which have a low NDVI) are built-up areas and water bodies.

Along the Rhine River lies the World Conference Center Bonn. It is here where ESA’s Living Planet Symposium 2022 will take place.

Organised with the support of the German Aerospace Center, the Living Planet Symposium will bring together scientists and researchers, as well as industry and users of Earth observation data, from all over the world to present and discuss the latest findings on Earth science.

The week-long event focuses on how Earth observation contributes to science and society, and how disruptive technologies and actors are changing the traditional Earth observation landscape, which is also creating new opportunities for public and private sector interactions.

The Living Planet Symposium will be held in-person offering you the chance to network with the most eminent scientists in the industry, learn about novel Earth observing techniques and explore innovative concepts such as New Space, the digital transformation and commercialisation.

To attend the event in person, you just need to register by next Monday 9 May. More information can be found at the Living Planet Symposium website.

Applebee’s And IHOP Are Adding New Technologies, Including Robotics, To Offset Labor Shortages