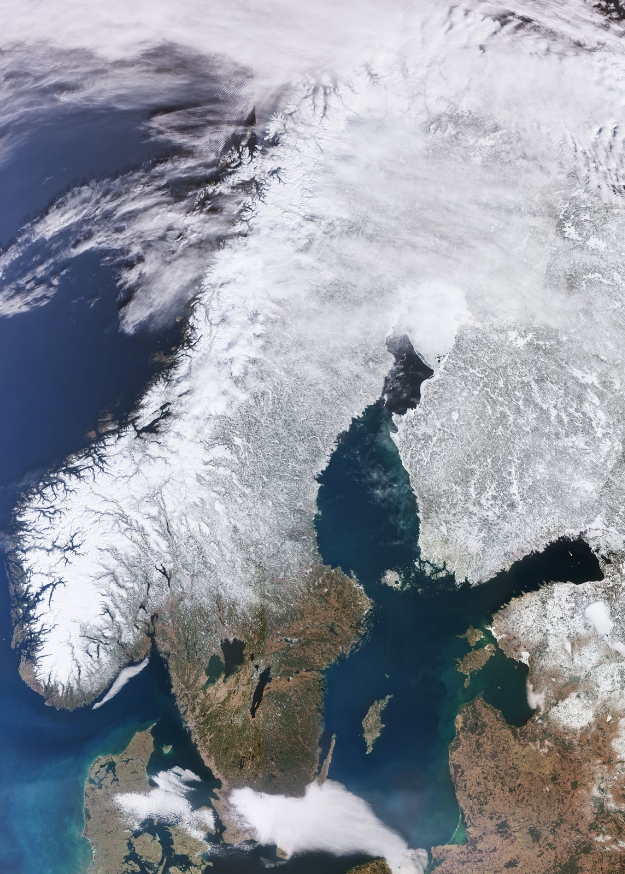 The Copernicus Sentinel-3 mission captured this impressive shot of the almost cloud-free Scandinavian Peninsula on 20 March 2022.

The Scandinavian Peninsula, which comprises Sweden and Norway, is approximately 1850 km long. It extends southward from the Barents Sea in the north, the Norwegian sea to the west and the Gulf of Bothnia and the Baltic Sea to the east. Denmark, Finland, Latvia and Lithuania are also visible in this week’s image.

Along the left side of the peninsula, the jagged fjords lining Norway’s coast can be spotted from space. Many of these fjords were carved out by the thick glaciers that formed during the last ice age. The largest and deepest fjord on Norway’s coast, called Sognefjord, lies in southwest Norway and is 1308 m deep.

Sweden’s topography consists mainly of flat, rolling lowlands dotted with lakes. Lake Vänern and Lake Vättern, the largest lakes of Sweden, are clearly visible at the bottom of the peninsula. The lakes do not freeze completely during the winter months. To the northeast of the peninsula lies Finland with more than 55 000 lakes – most of which were also created by glacial deposits.

During March, much of northern Europe and Scandinavia had been affected by a strong high-pressure weather system, which also allowed for this almost cloud-free acquisition. On 19 March in Tirstrup, Denmark, the atmospheric pressure reached 1051.6 hPa, the highest value ever recorded in March.

With a focus towards our oceans, Sentinel-3 measures the temperature, colour and height of the sea surface as well as the thickness of sea ice, while, over land, the mission maps the way land is used, provides indices of vegetation state and measures the height of rivers and lakes.

A technical note: the image is a mosaic of 2 descending orbits with a difference of around 60 minutes between them, hence the observable striping at the top of the image.

Why Your 'Digital Shabbat' Will Fail