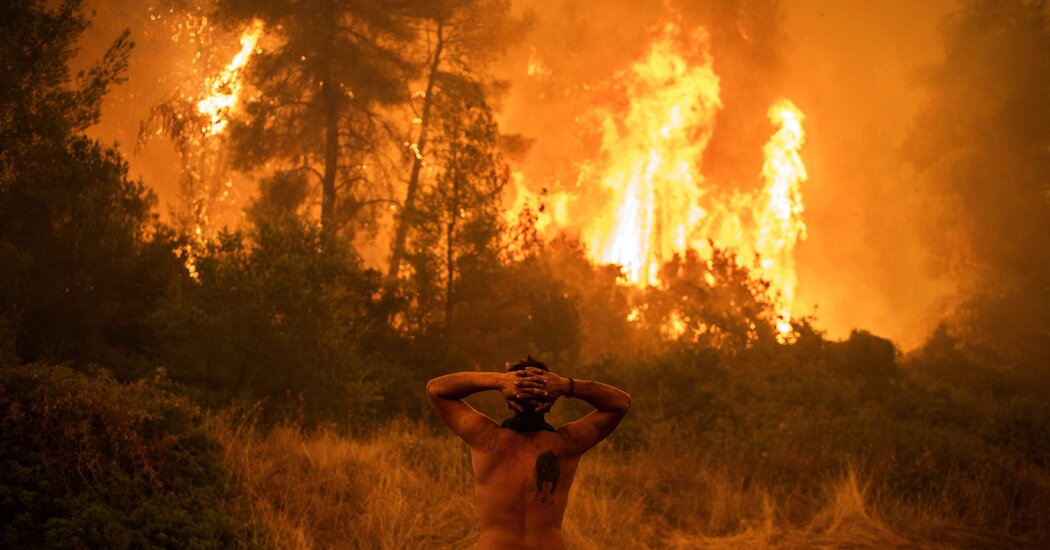 ATHENS — The effort to stamp out catastrophic wildfires in Greece entered a second week on Monday with foreign countries continuing to send support, and officials began to assess the extent of the damage to thousands of homes and tens of thousands of acres of forest land.

Wildfires were also still burning in nearby Turkey, where at least eight people have died, as well as in Italy and other parts of Europe. A protracted heat wave has created tinderbox conditions on the continent.

A spokesman for the Greek fire service, Vasilis Vathrakoyiannis, said multiple fires had been contained to a large degree but that the risk of them flaring up again was high. “We’re particularly concerned about Evia,” he said, referring to Greece’s second largest island, northeast of the capital, which has borne the brunt of the flames. “It’s a massive expanse where we can see a rekindling at any given moment.”

A video taken from an aircraft participating in the firefighting effort showed a fire rekindling on the island on Monday.

A video posted online by the weather service of the National Observatory of Athens showed the extent of the devastation to the island, with more than 120,000 acres (50,000 hectares) reduced to ashes.

On Sunday night, fires continued to burn on Evia, with residents of some villages defying government calls for them to abandon their homes.

Smoldering fires rekindled in the island’s north on Monday. A new large fire sprung up between the villages of Galatsonsa and Avgaria, fanned by high winds. In Kamatriades, bulldozers opened up fire breaks while residents used chain saws to chop down trees in the hope of slowing down the advancing fire.

In many areas, residents complained that their appeals for firefighting support were ignored and defied government appeals to evacuate their villages, using water hoses, buckets and fire extinguishers to put out flames.

Earlier in the day, hundreds more people were evacuated by ferry from the island’s northwestern coast after flames reached beaches in the area. A ferry moored on Evia’s northwestern coast provided temporary shelter overnight for residents of Pefki and other villages who had been driven from their homes. Greece’s state news agency shared photographs of the residents on social media on Monday.

Three helicopters from Serbia were on the way on Monday, and another three aircraft were due on Tuesday from Israel and the United Arab Emirates. More than 20 countries have contributed to Greece’s firefighting effort.

In a televised address to the nation on Monday night, Prime Minister Kyriakos Mitsotakis said firefighters had battled a total of 586 blazes over the past week. He apologized for failings in the state’s response to the crisis, promising that blame would be assigned where necessary.

“We may have done what was humanly possible, but sometimes that wasn’t enough in the uneven battle with nature,” he said, describing the fires as “a natural disaster of unprecedented proportions.”

While scientists have not yet had time to evaluate the connection between the current wave of extreme temperatures and global warming, it fits an overall trend that has seen climate change play a role in extreme weather in Europe. Research has shown that for major heat waves across Europe in recent summers, climate change has been a significant worsening factor.

A major United Nations climate report released Monday warned that nations have delayed curbing their fossil-fuel emissions for so long that they can no longer stop global warming from intensifying over the next 30 years, leading to more frequent life-threatening heat waves and severe droughts.

The authorities are investigating the causes of the fires, and four people have been arrested — two for arson and two for setting fires through neglect.