Ford has taken to social media to tease that something will soon be coming from the company and will be “electrifying.” Ford of Europe posted a video on Twitter where they will debut the electrified something at this year’s Goodwood Festival of Speed. Ford Performance then retweeted it, and while the video is short, it gives a little hint at what we’ll see later this month.

It’s no secret that Ford is pushing towards electrifying its lineup and expanding its commercial vehicle business. Being the political climate that it is, Ford of Europe supported the continent’s ban on ICE vehicles by 2035. This shouldn’t be that surprising, as the company has plans to launch five all-electric commercial vehicles by 2024. While they teased the lineup last month, none of those vehicle lighting signatures matched the one seen in the video. 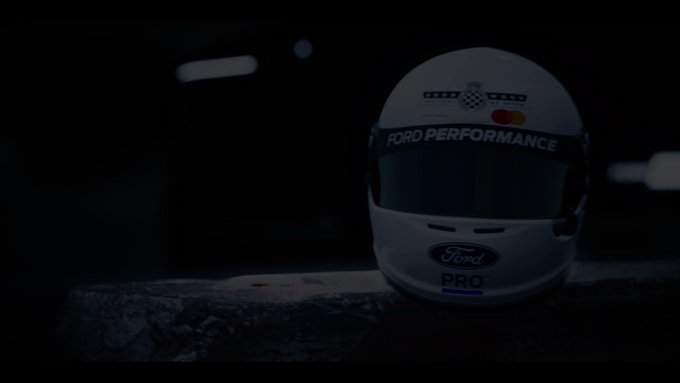 The wide and thin lighting element looks as if it’s detached from the headlights that are on either side of it. Viewers might have noticed that the bar is split into three different sections, but they’re designed to appear as one continuous element. This is unlike the front of the recently launched E-Transit Custom, which makes the three light bars stand out from each other. But the styling between the two does have some similarities. Perhaps, we’re looking at a high-performance van to demonstrate the potential future of all-electric commercial vehicles.

In the past, Ford Performance has debuted some of its most capable vehicles at the annual Goodwood Festival of Speed, such as the Ford GT Mk II and the Shelby Mustang GT500 in Grabber Lime.

The video also features a white Ford Performance-branded helmet. On the chin are a Ford logo and a prominent, bold “PRO” branding underneath it. Ford Pro launched earlier this year in Europe for the automaker’s commercial vehicle customers; the digital service is designed to make managing commercial fleets easier. The Ford Pro branding also reappears at the end of the video. Luckily, we won’t have to wait long to see what Ford has up their sleeves, as this year’s Goodwood Festival of Speed is just a few weeks away, with Ford’s reveal scheduled for June 23. Maybe it’s a faster F-150 Lighting? We’ll see.

When Will Black Reality Stars Get Their Props For Running Pop Culture?