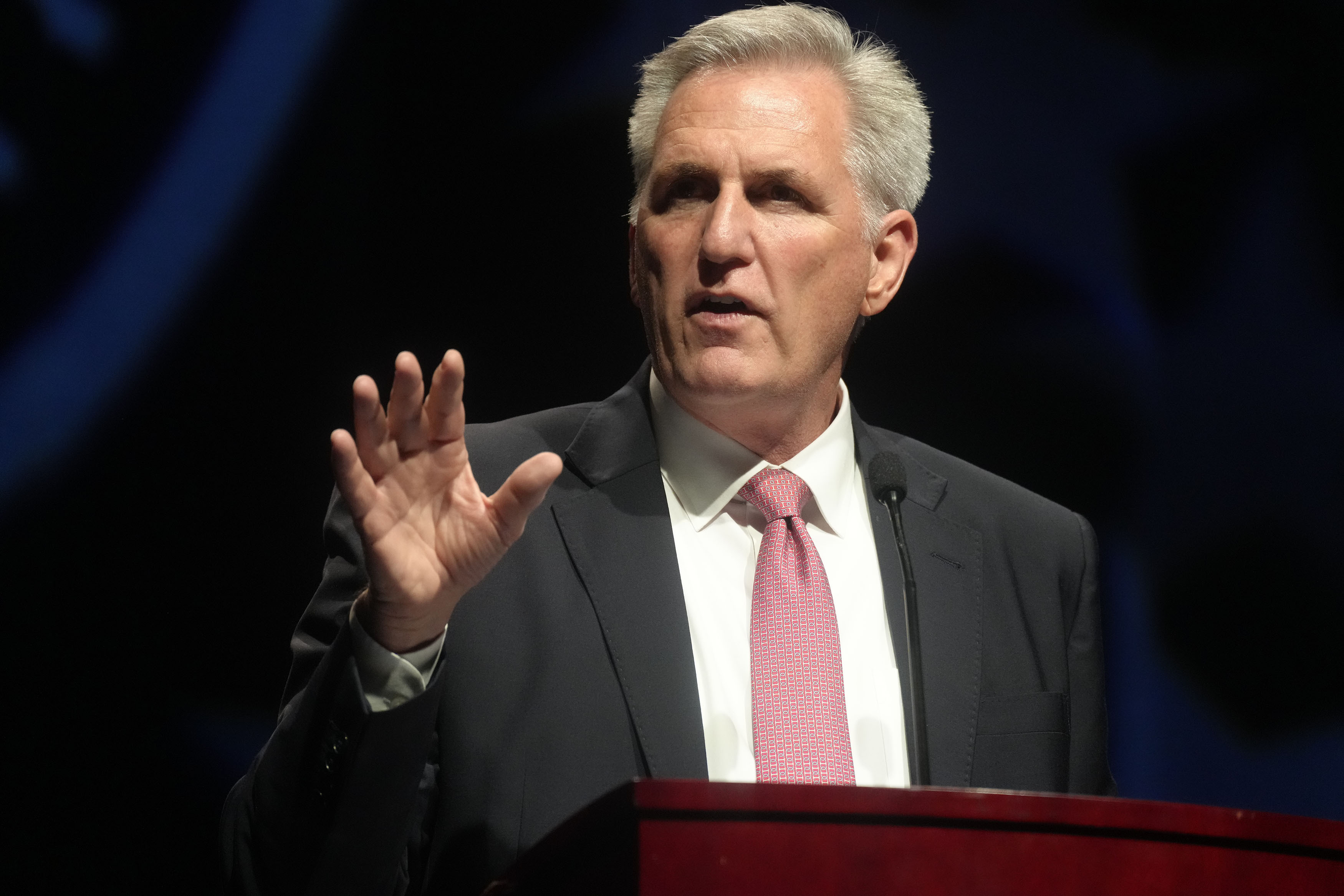 “I hope … we’re not going to mount a challenge,” Freedom Caucus member Rep. Randy Weber (R-Texas) said in an interview. “This is the most organized we’ve ever been. So why would we change it?”

The group does plan to push for modifications that would empower them in a future Republican majority, including the power to force a speaker eviction vote — what’s known as the “motion to vacate the chair.” And there’s still time to change their minds on a direct McCarthy challenge.

Even so, should a Freedom Caucus lawmaker jump into the speaker race, some say the roughly 35-member group isn’t expected to rally behind whoever emerges — underscoring McCarthy’s strength within the conference.

One big reason for the shift is that Rep. Jim Jordan (R-Ohio), perhaps the group’s most powerful figure, is now among McCarthy’s closest allies. Once a rival who harnessed his sway with the conference’s right flank to challenge the Californian for minority leader in 2018, now Jordan is quick to say he’s excited for a McCarthy speakership.

Some Freedom Caucus members privately see Jordan as the only member whose clout could rally the entire group behind a McCarthy opponent. Other conservatives, when asked about the Freedom Caucus’ disinterest in directly taking on McCarthy, simply pointed to a GOP unified behind him.

“I don’t think there’s anything newsworthy there,” said Rep. Dan Bishop (R-N.C.), a Jordan ally. “I often say it appears to me that Kevin has surpassing support among [the] conference to be speaker.”

The burgeoning Freedom Caucus position on a 2023 speakership vote is trickling down to likely future members. A House GOP candidate who met with the group’s lawmakers earlier this year summarized the Freedom Caucus recommendation as: Vote your conscience. If you support McCarthy, go ahead. If you don’t, that’s also fine.

This GOP candidate, sharing candid views on condition of anonymity, expressed surprise at the Freedom Caucus’ choose-your-own-adventure approach to the speakership vote.

Of course, the biggest caveat in conference dynamics remains the size of the GOP majority after the midterms. Until House Republicans see how many seats they pick up in November, it’s difficult to definitively predict how they’ll see McCarthy.

A smaller-than-expected gain — and particularly a shocking failure to take the House — would cause a firestorm over who was to blame. And McCarthy, at the top of the leadership food chain, would take the brunt of the finger-pointing.

“A lot depends on the actual numbers,” said Freedom Caucus member Rep. Morgan Griffith (R-Va.). “There are some people who prefer a different candidate, [but] they haven’t really focused on or coalesced around anybody.”

Griffith said the group also recognizes that McCarthy has listened and shown more goodwill to the Freedom Caucus than any GOP leader since it launched in 2015. Should McCarthy stop hearing the group out, Griffith added, “that could change things.”

Notably, Rep. Marjorie Taylor Greene (R-Ga.) declined to address the topic when asked about challenging McCarthy. The occasionally tumultuous relationship between the minority leader and the MAGA firebrand has appeared to steady in recent months; last week, she attended McCarthy’s GOP agenda rollout in Pennsylvania and sat happily behind his shoulder on stage.

Some in the group are even fully sidestepping questions about their support next year as they push for the conference to vote on a rules package before any leadership elections are held. That plan was first reported by the Washington Examiner, which also revealed other concessions the group is seeking: ending earmarks; diversifying the GOP steering committee typically stocked with leadership allies; and enacting a “majority of the majority” rule that states no legislation should come up without majority support within the conference.

Perhaps the key tenet of any Freedom Caucus-approved House rulebook is restoring the motion to vacate the chair — the very procedural maneuver used to oust one of McCarthy’s predecessors.

“I can’t speak to any of that,” Perry said of the leadership outlook, noting that the “Freedom Caucus is going to be a part of that. But … we’re really focused on the rules package right now. And likely anybody that we would support for anybody in any position in leadership, we’re going to want to discuss that in-depth and in a meaningful way.”

Reps. Bob Good (R-Va.) and David Schweikert (R-Ariz.) copied their group’s chair in redirecting questions about a McCarthy challenge to their focus on the next Congress’ rules package.

“There’s almost a maturity that’s come from the Freedom Caucus saying: Our job is to legislate,” said Schweikert.

Leadership, meanwhile, hasn’t tipped its hat on the rules matter.

Reps. Michael Cloud (R-Texas) and Chip Roy (R-Texas) asked McCarthy about it during last week’s GOP conference meeting, according to a person familiar with the back-and-forth, and McCarthy responded that members should focus on getting through the runup to the midterms.

“You see this every two years. There is always a robust discussion about what the rules should be. Again, we can’t put the cart before the horse — we have to win a majority to have that ability to have that discussion,” Scalise told reporters last week. “We are well aware of some of the things they’ve proposed.”

That circumspect reply is especially valuable given Freedom Caucus members haven’t decided whether the motion to vacate the chair would be a deal-breaker to their support for leadership contenders. Should the group vote as a unit, it could force a close speakership election past the first ballot or even deadlock the contest outright.

Rep. Lauren Boebert (R-Texas) said there’s “definitely some red lines — especially vacating the chair. That is a red line.” But she declined to say if the group would mount a bid against McCarthy, responding that “we’ll see.”

While Boebert has publicly criticized McCarthy at various times, even suggesting Donald Trump should be speaker in the past, she has privately expressed more allegiance to the California Republican behind closed doors, according to two Republicans familiar with her remarks.

Good called the power to force a speakership eviction “a really important part of that rules package” but also avoided any rigid insistence.

“If everything else that I outlined was agreed to — again, I don’t think we want to come and say: ‘oh, these are absolute,’” Good said. “These are not scripture.”

ETH Struggles To Break Past $1,300 Resistance