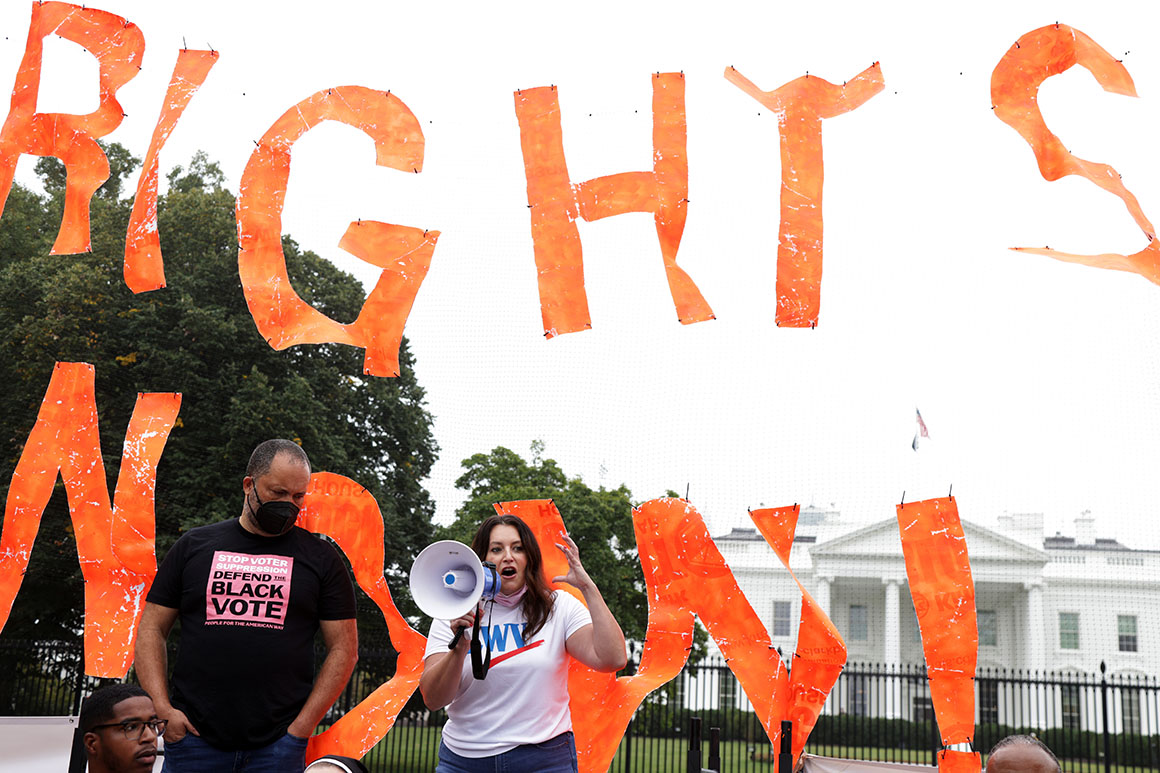 But Jones and other backers of Democrats’ voting bills may be in for another round of disappointment. When Democrats accepted the short-term, debt-limit deal offered by Senate Minority Leader Mitch McConnell to punt the deadline until December, it also postponed any discussion about changes to the filibuster — which advocates see as blocking any real chance of sending legislation to Biden’s desk.

“Quite frankly, we know that the likelihood of legislation getting passed without that [change] is very slim at this point,” said Virginia Kase Solomón, the CEO of the League of Women Voters.

Desperate to generate momentum with the debate focused elsewhere, some voting-rights groups are now trying to crank up the heat on the White House, urging Biden to call for the same exception for Democrats’ stalled voting bills.

“This was one of his priorities. This was part of the platform that he ran on to help strengthen and fix our democracy,” said Solomón. “We’ve heard a lot of words coming from the White House. But we haven’t seen a lot of action.”

Five of the protestors — including Ben Jealous, the president of the People For the American Way and former NAACP head — were arrested after refusing to leave Pennsylvania Avenue outside the White House. They were all held overnight, before ultimately being released without any charges.

“I think about Kamala, and I think about Joe. I know them as friends,” Jealous told the crowd, minutes before he was arrested on Tuesday. “We need our friends to stand up and be friends to the people of this country, have the courage that it takes to actually move voting rights forward.”

Cedric Richmond, the Biden senior adviser and former Louisiana congressman, argued the White House had taken action on its own — including an executive order to government agencies to find ways to increase voter participation, along with movement out of the Justice Department, including appointing well-regarded civil rights lawyers to top positions and growing the civil rights division.

“We are pushing Congress to act in terms of legislation, and we’re using our political capital to get it done. Doesn’t always have to be in public and seeking the attention for doing it,” Richmond said in an interview.

“I think the activists missed the fact that this is the first time we had all of the Democratic senators in favor of a bill. And now that we have that, we’re pushing that and so we’ll have a vote and then we’ll go from there,” he continued.

And even if Biden was to publicly pressure the Senate on the filibuster, there are still barriers in the way: Sens. Joe Manchin (D-W.Va.) and Kyrsten Sinema (D-Ariz.), both who have ardently supported the existing rules, which they say will prevent both parties from passing extreme legislation.

On Wednesday, before the agreement with McConnell was announced, Manchin once again shot down a change for the debt ceiling. “Nothing’s changing” on the filibuster, he told reporters.

Yet even with the reanimated filibuster conversation, what has been particularly grating to some advocates is that voting rights has repeatedly played second fiddle to other legislative priorities in Congress.

“We can’t even have a conversation about voting rights, because infrastructure, once again, is kind of blocking the way,” said Texas state Rep. Jasmine Crockett, a liberal Democratic lawmaker who was part of the group of Texans who fled the state over the summer in order to block a Republican-led bill that added new restrictions to voting in the state.

For those Texas Democrats, it is a particularly bitter pill to swallow. “Everything that we foreshadowed,” has come to pass in their state, Crockett said. The bill that they temporarily blocked is now law in Texas, after enough Democrats returned to the state House after weeks away to provide a quorum. And early proposals for the state’s new congressional map lock in Republican seats across the state.

“When it comes to voting rights, you see the remedy coming after the harm. And sometimes when the harm is already done, the remedy is really inconsequential,” said Texas state Rep. Trey Martinez Fischer, a Democrat.

In Congress, Democrats have been unable to send any voting-rights legislation to the president’s desk because of both filibusters, or the threat thereof, from Republicans and some intra-party squabbling. Their first attempt — the For the People Act, which got the symbolic H.R. 1 (117) and S. 1 (117) designations as the party’s top priority — died in the Senate because Manchin did not support it, and was also later filibustered by Republicans after Manchin agreed to a procedural vote.

Senate Democrats have now turned their attention to two other pieces of election legislation: the John Lewis Voting Rights Advancement Act, which would restore key provisions of the 1965 Voting Rights Act and was introduced in the Senate this week, and the Freedom to Vote Act, a pared down version of H.R. 1 that Manchin brokered with his Democratic colleagues.

The West Virginian has been in conversations with Republican colleagues to try to find any sort of compromise, POLITICO has reported, but the odds of securing 10 Republican senators who would sign on to break a filibuster for any sort of election legislation is very low. That looming failure is one of the last things advocates pin their hopes on for Manchin to change his mind on the filibuster.

“A reasonable person in Joe Manchin’s position would, upon discovering that there are not 10 Republican senators of good conscience … will vote to make an exception to the filibuster,” Jones, the freshman New York congressman, said.

It will be tested soon. Senate Majority Leader Chuck Schumer wrote in a “Dear Colleague” letter on Monday that senators should be prepared to consider both pieces of legislation “this work period or immediately at the start of the next.”

World’s largest cruise ship to debut in the U.S. and Europe