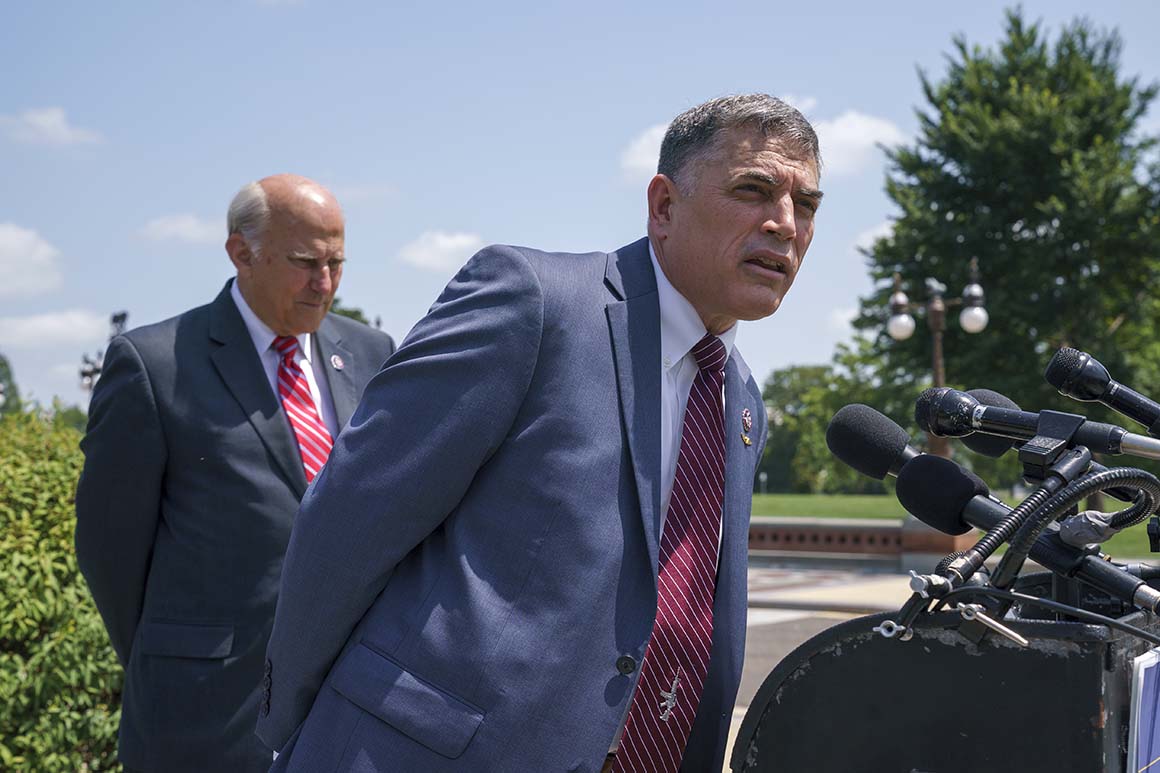 That dynamic was on full display in the Capitol Wednesday as D.C. police officer Michael Fanone, who suffered a concussion and heart attack while fending off the Jan. 6 mob, visited the Hill seeking meetings with the 21 House Republicans who voted against a bill to award a Congressional Gold Medal to police officers for their service during the attack. Fanone says freshman Rep. Andrew Clyde — the Georgia Republican who recently downplayed the insurrection by comparing it to a ”normal tourist visit” — refused to shake his hand after the officer introduced himself in an elevator.

Rep. Eric Swalwell (D-Calif.), one of the House’s impeachment managers during Trump’s second trial, was quick to seize on the interaction, tweeting “that to honor Trump, @housegop will dishonor the police.”

“It’s hard to accuse Democrats of defunding the police when you are dishonoring the police,” Swalwell said in an interview. “It makes me wonder: Was there prior support [in the GOP] for law enforcement? Or just phony political pandering? Because when the rubber meets the road, they’re choosing Trump over the cops.”

It’s a clear attempt to flip the script on Republicans, who yoked Democrats in key battleground districts to liberal calls to “defund the police” as part of an effective messaging strategy that Democrats struggled to counter in the 2020 election cycle. But now, Republicans may find themselves on their heels — and see their own narrative undermined — if these Democratic attacks stick.

Yet Republicans aren’t sweating the prospect of being tagged as anti-police, arguing that Democrats are just trying to deflect from their own problems on an issue where they know they’re politically vulnerable.

Still, Democrats see an opening after a wedge started to form between the GOP and law enforcement during this spring’s debate over a proposed independent commission to investigate the events of Jan. 6. While 35 Republicans supported the effort in the House, Republicans in the Senate blocked the bill — despite a lobbying campaign from the mother of fallen Capitol Police officer Brian Sicknick, who died following his response to the Jan. 6 attack after suffering from a stroke.

Those tensions surfaced again in the House again this week, when nearly two dozen Republicans opposed legislation to bestow the highest congressional honor on Capitol and D.C. police officers who defended the building from rioters. Hard-line conservatives took issue with the bill for referring to the siege as an “insurrection” and accused Democrats of just trying to play politics.

Firebrand Rep. Lauren Boebert (R-Colo.), who voted against the measure, argued there are better ways to honor the police. She also lit into Democrats for their positions on police reform.

“I hope that every police officer that has gone to other members of Congress here asking why they voted no yesterday went to the Democrat members’ office who wanted to remove their qualified immunity, who wanted to make them personally liable for doing their job,” Boebert said, citing a legal doctrine shielding offers from legal burdens for behavior on the job that Democrats want to overhaul.

“Every Democrat who has called to defund the police,” Boebert added, “I hope they are held accountable. Democrats are using [police officers] as pawns for their political game, and I’m tired of it.”

The escalating rhetoric over support for law enforcement comes as some Trump acolytes on the Hill continue to downplay the Jan. 6 assault. At a hearing this week, Rep. Paul Gosar (R-Ariz.) accused the cop who fatally shot rioter Ashli Babbitt of “lying in wait” before he “executed” her and falsely claimed none of the rioters had firearms. And on Twitter, Rep. Marjorie Taylor Greene (R-Ga.) suggested without evidence that FBI operatives had a hand in “organizing and carrying out the Jan 6th Capitol riot.”

Democrats have wasted no time hitting back. Rep. Ruben Gallego (D-Ariz.) said the “GOP loves to say ‘back the blue’ but really it is only when politically convenient.” Rep. Dan Kildee (D-Mich.) called his Republican colleagues “either evil or nuts.” And Rep. Jim McGovern (D-Mass.) labeled the GOP opposition to the gold medal bill as “sick” and “pathetic.”

And it’s not just Democrats who have called out Republicans for how they’ve treated the police since Jan. 6.

“On January 6, as the violent mob advanced on the House chamber, I was standing near @RepGosar and helped him open his gas mask. The Capitol Police led us to safety,” tweeted Rep. Liz Cheney (R-Wyo.), who voted to impeach Trump for inciting the insurrection. “It is disgusting and despicable to see Gosar lie about that day and smear the men and women who defended us.”

Some Democrats are wary of overplaying their hand or politicizing such a sensitive issue. The back-and-forth also runs the risk of upending lawmakers’ bipartisan negotiations on a police reform deal.

But Democrats, who have searched for ways to combat the GOP’s policing attacks, also see their opponents’ actions as an opportunity to highlight the contrast between the two parties on law enforcement — as long as they also show voters what they stand for. Rep. Sean Patrick Maloney (D-N.Y.), chair of the Democratic Congressional Campaign Committee, also pointed to the unified Republican votes against a Covid aid bill earlier this year that included funding for local police departments.

Leica just announced its own phone