Facebook Twitter LinkedIn Pinterest Reddit VKontakte Pocket Messenger Messenger Telegram Share via Email
NEW DELHI: The opposition and government exchanged heated words, blaming each other for the pushing and shoving between opposition MPs and Parliament security staff on Wednesday during the passage of the general insurance bill.

The Centre fielded seven ministers on Thursday and demanded that a high-level committee should review videos of the chaotic proceedings in the Rajya Sabha and take strong action against those MPs who had indulged in “violence”.

The ministers also said opposition allegations that marshals and “outsiders” had assaulted MPs were “baseless and false” .

You have successfully cast your vote 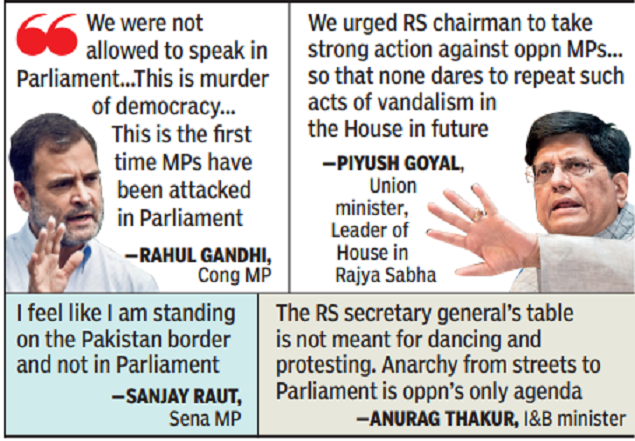 Opposition parties dubbed the early adjournment of Parliament and use of alleged outsiders to “manhandle” their MPs in the Upper House as “murder of democracy”. Led by leader of opposition in the Rajya Sabha, Mallikarjun Kharge, several opposition leaders, including Nationalist Congress Party (NCP) leader Sharad Pawar, wrote to Rajya Sabha chairman Venkaiah Naidu complaining against the “use of unacceptable force and physical manhandling of the MPs, including women members” by security personnel deployed in the House.

Congress leader Rahul Gandhi claimed MPs in Rajya Sabha were beaten up. “This was nothing short of murder of democracy,” he said.

Leader of the House in Rajya Sabha Piyush Goyal hit back, claiming opposition MPs had climbed on the RS secretary general’s table and tried to break a gate. A window pane was broken and a woman security staff injured in the ruckus, he said, adding a file was thrown at the chair.

“We called on the RS chairman (Naidu) and urged him to take strong action against these MPs so that no one dares repeat such acts of vandalism,” Goyal said