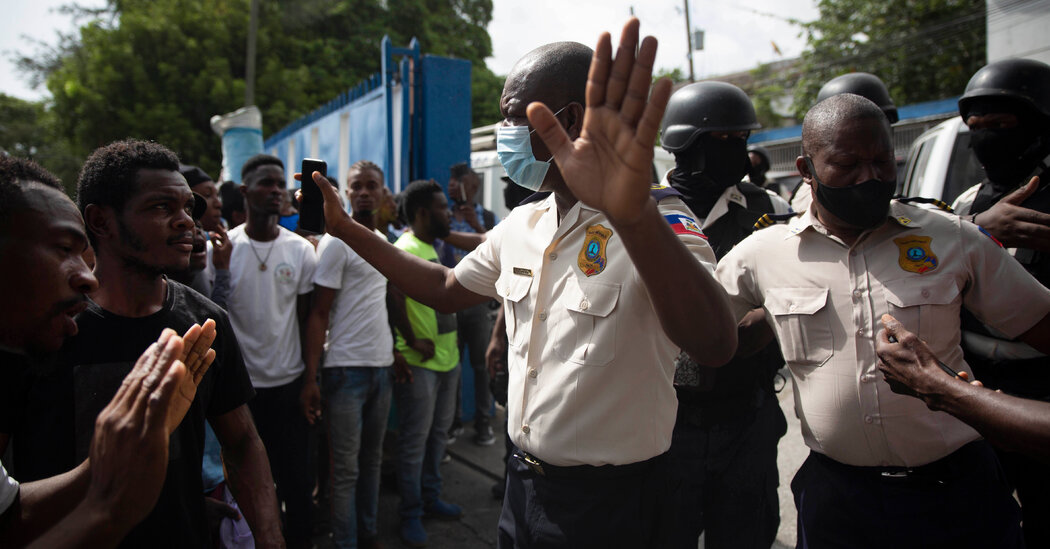 The official manhunt for the assassins who burst into the home of Haiti’s president continued on Thursday, but as some ordinary Haitians set out to capture suspects themselves, setting afire vehicles believed to have been used in the attack, the interim prime minister appealed for calm and to refrain from violence.

“I’m asking everyone to go to their homes,” said Claude Joseph, the interim prime minister, at a news conference Thursday afternoon. “The police have the situation under control.”

The goal, Mr. Joseph said, is to maintain security in the country and get justice for the former President Jovenel Moïse and his family.

Haiti’s police chief, Léon Charles, said over the past day the authorities had arrested six suspects. He also said police had recovered three bodies, “visibly foreigners,” as well as five vehicles believed to have been used in the assassination plot.

But several of those vehicles had been burned by citizens, he said, making it impossible for the police to gather evidence.

But passions were high on the streets of Pétionville, an affluent suburb of the capital close to where the president lived. A large crowd of people gathered in front of the police station there, demanding to hear from the police chief about the assassins — some of whom were believed to be inside.

“Burn them,” they cried.

Later, drifting away from the police station, some took their anger into nearby streets, at one point attacking a car dealership. Two protesters were arrested by the police.

A video shared widely on social media shows a crowd of more than 30 Haitians pulling light-skinned men through the footpaths of a dense neighborhood. One of the men was shirtless and had his arms tied with a rope behind his back. The people in the crowd, who appeared to be unarmed, brought the men to the police station, sources told The New York Times.

The police were also surrounding two buildings in which suspects in the assassination had holed up, Helen La Lime, the top U.N. official in Haiti, said at a news conference.

One of the suspects arrested in Haiti is an American citizen of Haitian descent from South Florida, said Haiti’s minister of elections, Mathias Pierre.

On Thursday, just a day after declaring a “state of siege” and a curfew, Mr. Joseph, the interim prime minister, asked people to return to work and said he planned to reopen the country’s main airport.

Reporting contributed from Andre Paulte and Harold Isaac in Haiti.