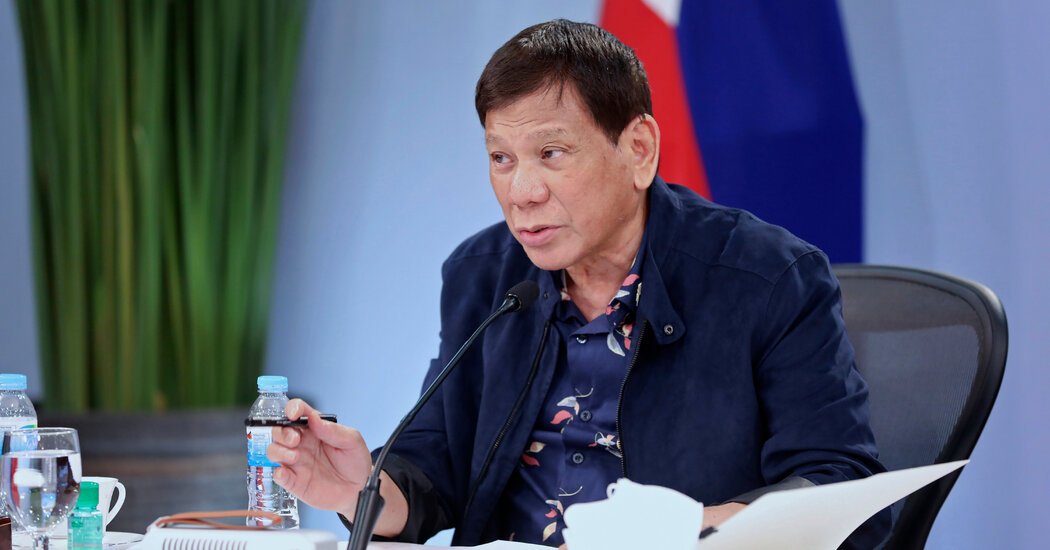 MANILA — Rodrigo Duterte has dominated politics in the Philippines since becoming president five years ago, with an antidrug crusade blamed for thousands of extrajudicial killings and a pressure campaign against opposition leaders and the news media.

Now, with mere months left in his six-year term, his opponents fear he is laying the groundwork to stay in power for years to come.

Mr. Duterte announced this week that he intended to run for the vice presidency in the elections next May. Critics say it is a blatant attempt by Mr. Duterte, 76, to save himself from his “political sins” as he confronts possible prosecution by the International Criminal Court. An I.C.C. report last year said there was sufficient evidence to show that crimes against humanity had been committed in Mr. Duterte’s bloody drug war, which has left thousands dead.

But Mr. Duterte says he still has unfinished business, chiefly the drug war and his fight against the country’s Communist insurgency.

“I may not have the power to give direction or guidance, but I can always express my views in public,” he said of his potential new role as vice president.

He has long flirted with the idea of staying on in government, though he repeatedly said during the past year that he was tired of the presidency, which he claimed had taken a toll on his health.

Then, late Wednesday, during a nationally televised cabinet meeting, Mr. Duterte said unequivocally: “All right, I will run for the vice presidency. Then I will continue the crusade.”

The political and defense analyst Chester Cabalza, founder of the Manila-based International Development and Security Cooperation, a research institute, said Mr. Duterte’s decision was clearly meant to save him from prosecution.

“However, international laws are tested to have teeth against world leaders who have committed crimes against humanity,” Mr. Cabalza said in an interview. “And this will not spare him from his political sins.”

In addition, he said, Mr. Duterte likes to be portrayed as the man in charge, and playing second fiddle is clearly not his style.

“We will see clashes and divides if this happens,” Mr. Cabalza said, adding that the president’s fading health could also work against him.

In the Philippines, the president and vice president are elected separately, with each serving a single six-year term. The Constitution bars a president from seeking re-election, but it allows him or her to run for a lower office afterward.

Two graft-tainted former presidents, Joseph Estrada and Gloria Macapagal-Arroyo, were elected to other public offices after their terms as leader of the country ended.

There is no legal reason why Mr. Duterte cannot be prosecuted as president, but he has made it clear that he would defy any summons by the international court. A vice president would have less power to do so, but Mr. Duterte hopes to run in tandem with Senator Christopher Lawrence Go as the presidential candidate.

If both men win, political experts say, Mr. Go can either resign to allow Mr. Duterte to step in as leader or let Mr. Duterte rule the country by proxy, ensuring he escapes prosecution.

Harry Roque, the president’s spokesman, confirmed on Thursday said that all Mr. Duterte was waiting for now was for Mr. Go “to make up his mind” about his candidacy.

Mr. Go did not return a phone call requesting comment and has not publicly addressed the issue of running for president. In a statement to local reporters, he said of Mr. Duterte: “I promised him that I will serve him as long as he lives. And that promise includes taking care of his children when he is gone.”

Mr. Duterte’s decision puts him on a collision course with his daughter, Sara Duterte, the mayor of the city of Davao. She has shored up popularity as a potential successor to his father but is not a member of his political party.

She appeared not to be amused by the latest development. She said that her father had informed her ahead of time about his decision and that “it was not a pleasant event.”

Mr. Roque, for his part, said he did not wish to comment on an internal “family affair.”

Among other figures who have indicated they planned to contest the presidency are Senator Manny Pacquiao, the boxing star who parlayed his sports popularity into a career in politics; Francisco Domagoso, the current mayor of Manila, who was once a matinee idol known as Isko Moreno; and Vice President Leni Robredo, the opposition leader, who is a lawyer and a former member of Congress.

The former congressman Neri Colmenares, a human rights lawyer, said Mr. Duterte’s announcement appeared to be an attempt to perpetuate his own political dynasty. He suggested that the president was exploiting the Constitution.

Mr. Duterte remains popular in the impoverished Philippines, though his luster has been dimmed somewhat by corruption allegations and the extrajudicial killings, according to various surveys. Corruption accusations have also hounded Mr. Duterte’s Covid-19 response; he has refused to fire his health secretary over discrepancies in the accounting of state funds.

“He is now a lame duck and will surely lose in the 2022 elections,” Mr. Colmenares predicted.

Mr. Colmenares, who is one of a group of lawyers who brought charges against Mr. Duterte before the I.C.C., added, “His craving for immunity only shows he is afraid of the International Criminal Court after all his bluster of being a fearless president.”

The only way for Mr. Duterte to escape prosecution is for him to stay on as president, Mr. Colmenares added, and the only way he can do that is through the back door.

“He’s hoping to escape prosecution after he is out of power,” he said. “It is not only legally insane, but also exposes his real fear of going to prison.”

How to Set Smart Goals for Your Investments