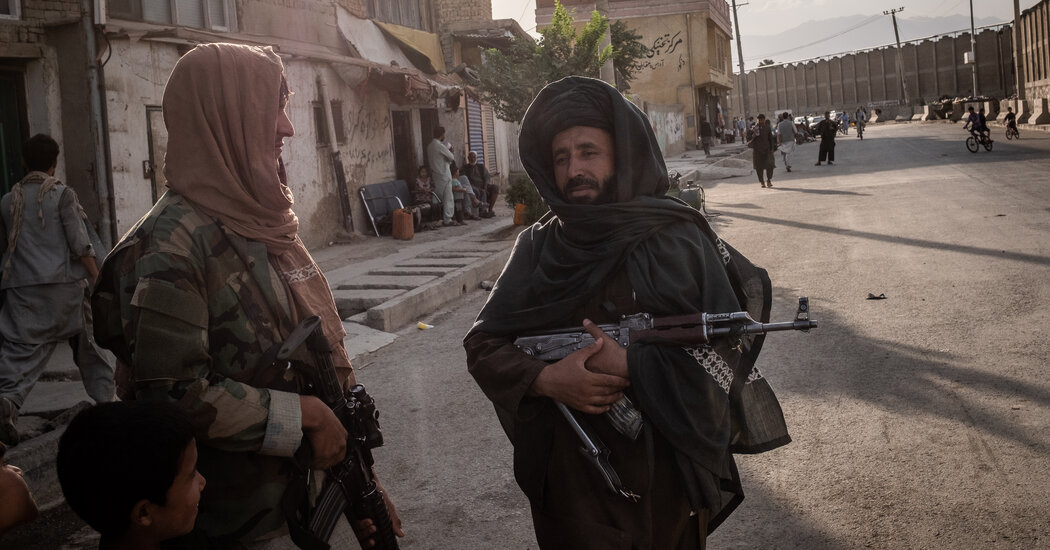 Even as the United States finalizes its departure from Afghanistan, it faces a dilemma there as wrenching as any during the 20-year war: how to deal with the new Taliban government.

The question is already manifest in the debate over how deeply to cooperate against a mutual enemy, the Islamic State branch in the region, known as ISIS-K.

Another: Whether to release $9.4 billion in Afghan government currency reserves that are frozen in the United States. Handing the Taliban billions would mean funding the machinery of its ultraconservative rule. But withholding the money would all but ensure a sudden currency crisis and halt on imports, including food and fuel, starving Afghan civilians whom the United States had promised to protect.

These are only the beginning. Washington and the Taliban may spend years, even decades, pulled between cooperation and conflict, compromise and competition, as they manage a relationship in which neither can fully tolerate nor live without the other.

However fierce in battle, the Taliban seem to understand that governing an impoverished, war-ravaged nation is a very different challenge for which it needs economic and diplomatic support, both of which it is already seeking from the United States.

Washington, for its part, sees Afghanistan as a potential haven for international terrorists, a center of geopolitical competition against its greatest adversaries and the site of two looming catastrophes — Taliban rule and economic collapse — that could each ripple far beyond the country’s borders.

At home, President Biden already faces a backlash over Afghanistan that would be likely to intensify if he were seen as enabling Taliban rule. But he may find that securing even the most modest American aims in the country requires tolerating the group that now controls it.

His administration got a taste of this new reality last week, when American forces evacuating Kabul relied on Taliban fighters to help secure the city’s airport.

“It’s in their interest that we are able to leave on time,” President Biden said when asked about the risks, and perhaps indignities, of welcoming partial Taliban control over access to the evacuation.

He added, in a line that may come to define the relationship, “It’s not a matter of trust, it’s a matter of mutual self-interest.”

If the United States, now without troops or allies in Afghanistan, wishes to contain ISIS-K, it will need on-the-ground intelligence and friendly forces.

And the Taliban, still straining to consolidate control over the country’s many remote corners, may need American air power to help defeat the group.

That combination was essential to beating the Islamic State in Iraq, officials who worked on the campaign have said. Washington and the Taliban are already testing quiet, mostly tacit coordination.

The United States has a long history of working with unsavory governments against terrorist groups.

But such governments have routinely exploited this to win American acquiescence, and even assistance, in suppressing domestic opponents they have labeled extremists.

This dynamic has long enabled dictators to disregard American demands on human rights and democracy, confident that Washington would tolerate their abuses as long as they delivered on terrorism matters.

Even if American officials could verify every target list, any airstrikes would be in service to a Taliban takeover it spent decades resisting. And each Taliban soldier spared from fighting ISIS-K could be redirected to suppressing less extreme opposition groups.

It may ultimately be a question of whether Washington prefers an Afghanistan divided by civil war — the very conditions that produced the Taliban and now ISIS-K — or one unified under the control of a Taliban that may or may not moderate itself in power.

The Taliban, desperate for foreign support, have emphasized a desire to build ties with Washington.

The longer the United States holds out recognition, formal or informal, the more incentive the Taliban have to chase American approval. But if Washington waits too long, other powers may fill the diplomatic vacuum first.

Iran and China, which border Afghanistan, are both signaling that they may embrace the Taliban government in exchange for promises related mostly to terrorism. Both are eager to avoid an economic collapse or return to war on their borders. And they are especially eager to keep American influence from returning.

“Beijing will want to extend recognition to the Taliban government, likely after or at the same time that Pakistan does so but before any Western country does,” Amanda Hsiao, a China analyst for the International Crisis Group, wrote in a recent policy brief.

Iran has already begun referring to the “Islamic Emirate,” the Taliban’s preferred name for its government. Iranian missions remain open.

For Washington, there are gray areas between embracing or isolating the Taliban. Friendly countries with interests in Afghanistan, such as Turkey or Qatar, are already hinting at a desire to keep up or even deepen business interests in the country, for which they are likely to seek at least tacit American approval.

Washington did not recognize Vietnam’s government until 1995, 20 years after withdrawing. But the intervening years included a flurry of agreements. American concessions tended to strengthen Vietnamese pragmatists over hard-liners, bringing reciprocation.

Still, Vietnam remains a single-party dictatorship that has only very slowly and slightly eased. But the former enemies have drawn much closer over one issue that is not likely to apply in Afghanistan, extensive trade, and another that is — opposition to China.

Many Afghans fear that American recognition, even indirect, could be taken as a blank check for the group to rule however it wants.

Still, some who are fiercely opposed to both the Taliban and the American withdrawal have urged international engagement.

“Everyone with a stake in the stability of Afghanistan needs to come together,” Saad Mohseni, an Afghan-Australian businessmen behind much of the country’s media sector, wrote in a Financial Times essay.

Rather than undermine the Taliban government, he urged, foreign powers including the United States “must leverage this need for recognition and persuade the Taliban to adopt a more accommodating stance.”

Who are the Taliban leaders? These are the top leaders of the Taliban, men who have spent years on the run, in hiding, in jail and dodging American drones. Little is known about them or how they plan to govern, including whether they will be as tolerant as they claim to be. One spokesman told The Times that the group wanted to forget its past, but that there would be some restrictions.

Neither engagement nor hostility is likely to transform the group’s underlying nature. And even when engagement works, it can be slow and frustrating, with many breakdowns and reversals on a road to rapprochement that might take decades to travel.

The Other Looming Catastrophe

Perhaps the only scenario as dire as a Taliban takeover is one that is all but assured without American intervention: economic collapse, even famine.

Afghanistan imports much of its food and fuel, and most of its electricity. Because it runs a deep trade deficit, it pays for imports mostly through foreign aid, which amounts to nearly half of the country’s economy — and has now been suspended.

The country holds enough currency reserves to finance about 18 months of imports. Or it did, until the U.S. froze the accounts.

As a result, Afghanistan may soon run out of food and fuel with no way to replenish either.

“Acute famines generally result from shortages of food triggering a scramble for necessities, speculation and spikes in food prices, which kill the poorest,” a Columbia University economist, Adam Tooze, wrote last week. “Those are the elements we can already see at work in Afghanistan.”

As the United States learned in 1990s Somalia, flying in food does not solve the problem and may even worsen it by putting local farmers out of business.

Mr. Tooze warned of what economists call a “sudden stop,” in which countries suddenly lose the ability to finance their trade deficit. This can also trigger a currency crisis, leading to runaway inflation that makes whatever food is left all but unaffordable.

In the northern Afghan city of Kunduz, flour prices have already risen by 41 percent and gas prices by 63 percent, according to Save the Children, a charity. The group also surveyed some of the thousands of families displaced from rural areas to Kabul and found that many already lack the means to buy food.

It is difficult to imagine a harder sell in Washington than offering diplomatic outreach and billions of dollars to the group that once harbored Al Qaeda, barred women from public life and staged public executions.

Republicans are already seizing on the chaos of the withdrawal to criticize Mr. Biden as soft on adversaries abroad.

He may also face pressure from Afghan émigrés, a number of whom already live in the United States. Diasporas, like those from Vietnam or Cuba, tend to be vocally hawkish toward the governments they fled.

The administration, which is pursuing an ambitious domestic agenda in a narrowly divided Congress, may be hesitant to divert more political capital to a country that it sees as peripheral.

Still, Mr. Biden has seemed to relish rejecting political pressure on Afghanistan. Whether he chooses to privilege geopolitical rivalry, humanitarian welfare or counterterrorism in Afghanistan, he may find himself doing so again.

In Afghanistan, fear and apprehension as Taliban prepares to form a new government