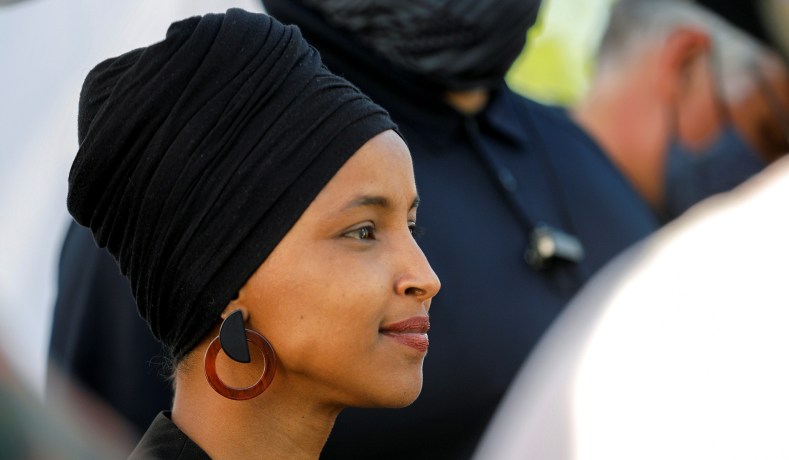 Every time Ilhan Omar says something incendiary and/or idiotic — which is quite often — the fallout unfolds in the same way.

First, Omar and her allies smear her critics. After a sad gaggle of Jewish House Democrats finally wrote a tepid letter asking the congresswoman to pretty please “clarify” her comments comparing Israel and the United States to the Taliban and Hamas, Omar took to Twitter to accuse them of using “islamophobic tropes.” Her spokesperson, Jeremy Slevin, claimed that the letter illustrated that “Islamophobia is a normalized part of American political discourse” — in particular, the contention that Omar’s likening of militants who target civilians to those who defend them gives “cover to terrorist groups.” Others, such as her colleague Cori Bush, demanded an end to “anti-Blackness and Islamophobia.”

Second, Omar plays the victim to chill speech. “This is the kind of incitement and hate that leads to real violence,” Omar noted, tweeting a recording of an odious racist threat that was left, presumably, in her voicemail. Of course, simply because there are terrible people in the world, doesn’t change Omar’s words. It is imperative, in fact, that we don’t let some nuts undercut our ability to freely express our political disagreements — which is what Omar is trying to do. And, if we are going to start holding politicians responsible for the actions of third parties, then Omar has a lot of answering to do for the spike in anti-Semitic violence last month.

Then again, her Democratic colleagues never accused Omar of blood libel or of hypnotizing the world for evil. They merely asked her to explain her own statement. It’s certainly not “Islamophobic” to seek clarification for why she believes the Taliban and the United States are morally comparable. It’s a simple question. Surely, Omar, who believes the U.S. was “founded by genocide” and built its power through “neocolonialism,” has some Marxist drivel to share on the topic. And if Omar can’t explain herself, perhaps a reporter will take a short break from the Marjorie Taylor-Greene beat to see what Nancy Pelsoi thinks of the statement. But, whatever the case, being an African-American Muslim woman doesn’t give Omar dispensation from debate or immunity from criticism. At least, not yet.

Immigration: ‘Return to Mexico’ Asylum Seekers Will Get Second Chance to Apply

Immigration: ‘Return to Mexico’ Asylum Seekers Will Get Second Chance to Apply