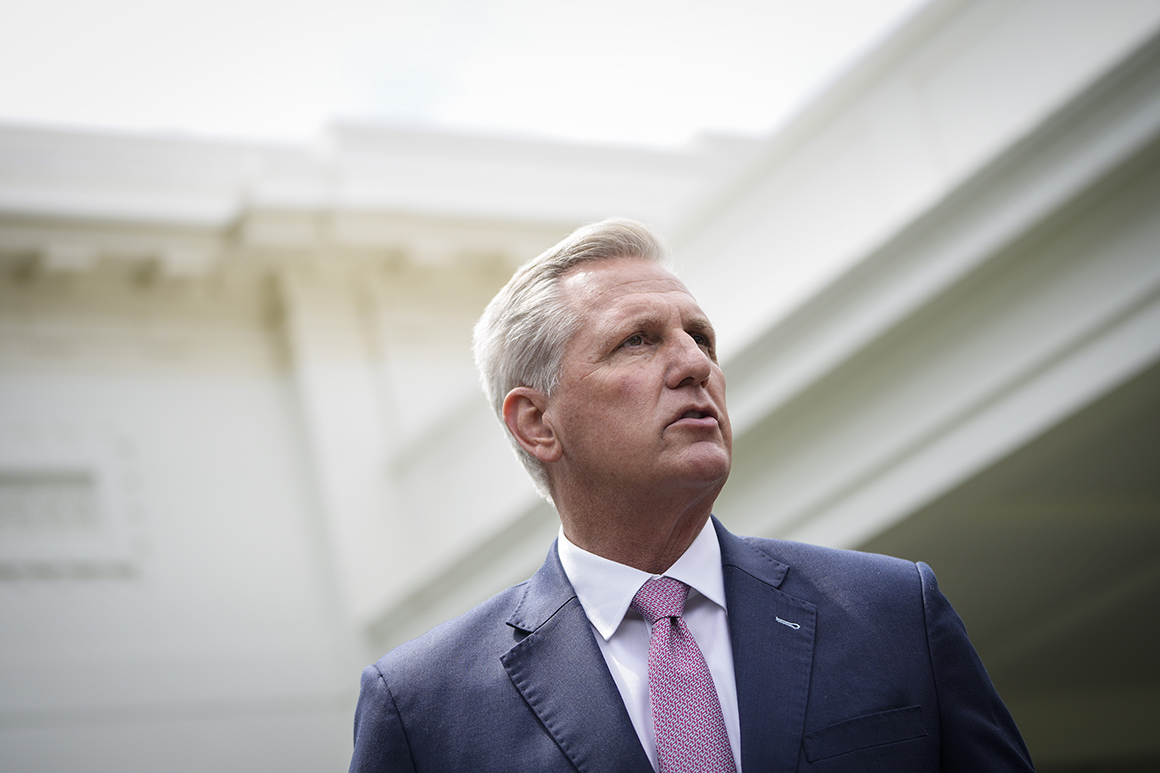 Further complicating the dynamics for McCarthy, the conservative wing in the House Freedom Caucus informed him on Monday evening they were staunchly opposed to the commission, and former President Donald Trump came out against it Tuesday evening.

While an avalanche of defections is now looking less likely, McCarthy still finds himself in a difficult position as he tries to balance the various factions in his conference while also mollifying the former president down in Mar-a-Lago — and he’ll need support from all those corners to achieve his dream of becoming speaker should the GOP retake the House next year. On the far right, lawmakers complained that McCarthy should have whipped against the bill from the beginning and were angry that Katko, who voted to impeach Trump, was in charge of getting a deal in the first place.

And Rep. Matt Gaetz (R-Fla.) took to Twitter to air his gripes, saying: “Choosing a pro-impeachment Republican to lead negotiations was foolish from the start.”

But the more moderate lawmakers feel like Katko was hung out to dry and are worried they no longer have enough political cover to vote for the bill, which Democrats are already signaling they’ll use as a cudgel in the midterms. Those same members have grumbled that McCarthy too often caters to the right flank because he needs their support to become speaker one day.

It’s the same set of tricky internal dynamics that will undoubtedly hound McCarthy if Republicans win back the House and he runs for the speakership. And while no one in the conference thinks this latest episode will be a deciding factor in his path to 218 votes, it has shown how McCarthy’s hallmark attempts to please everyone can easily backfire, leaving some members feeling frustrated.

“He tries to be all things to all people. Katko was thrown under the bus,” said one GOP lawmaker, who spoke on condition of anonymity to discuss internal dynamics more freely. “It put everybody in a bad spot.”

When asked about McCarthy’s decision to oppose the commission, Rep. Fred Upton of Michigan responded: “Disappointed.”

McCarthy — who could be called to testify about Trump and the riots by the proposed investigative body — is now doing what he can to keep defections to a minimum, short of a formal whip operation. McCarthy tapped House Minority Whip Steve Scalise (R-La.) to send a “leadership recommendation” urging a “no” vote on the proposal. McCarthy, who outlined his reasons for opposing the proposal during a closed-door conference meeting, has also engaged in one-on-one conversations with members about the commission, sources said. McCarthy’s allies say he is not twisting arms or putting direct pressure on people.

And he might not need to. On the morning of Wednesday’s House vote, McCarthy attended a coffee series hosted by Sen. Roy Blunt (R-Mo.), where Senate Minority Leader Mitch McConnell informed lawmakers he would be opposing the commission bill, according to sources. McConnell made his position public several hours later, which Republican sources predicted may help significantly limit the number of the defections on the House floor to somewhere between 20 and 30.

The commission measure was the product of a compromise between Katko and Homeland Security Committee Chair Rep. Bennie Thompson (D-Miss.). It would task a bipartisan 10-person panel with delivering a report on the causes and facts of the insurrection by the end of the year.

The commission proposal faces an uncertain future in the 50-50 Senate, where McConnell announced Wednesday that he opposed it as “slanted and unbalanced.” With the legislative filibuster still intact, Democrats need Republican support to pass the legislation into law — a rapidly dimming prospect.

Some GOP lawmakers said that McConnell’s opposition could push more Republicans into the “no” column — even if they wish that wasn’t the case.

“Obviously, they’re going to take that into consideration,” said Rep. Tom Reed (R-N.Y.), who plans to back the commission proposal. But “I just wish folks looked at the bigger picture and recognize…we can still work together when we have moments like what happened on January 6 and learn from it, so that we make sure that it never occurs again.”

One option for Democrats if Republicans block the legislation is to continue existing committee investigations or establish a select committee, both of which do not require Republican support.

Pelosi, however, indicated Democrats would maintain their current course, telling reporters Wednesday, “I certainly could call for hearings in the House with a majority of the members being Democrats, with full subpoena power for the agenda being determined by the Democrats, but that’s not the path we have chosen to go.”

“We’re working on it and we don’t have to create another select committee,” she said, adding that FBI Director Christopher Wray would be testifying soon before her committee on the insurrection.

The House is also set to vote Thursday on a package providing billions of dollars to address security gaps at the Capitol, pay National Guard troops and Capitol Police officers, and fund a “quick reaction force.” Although it is likely to pass the House, the funding legislation is expected to garner fewer House Republican votes, and Senate Republicans have also voiced doubts about the need for the legislation.