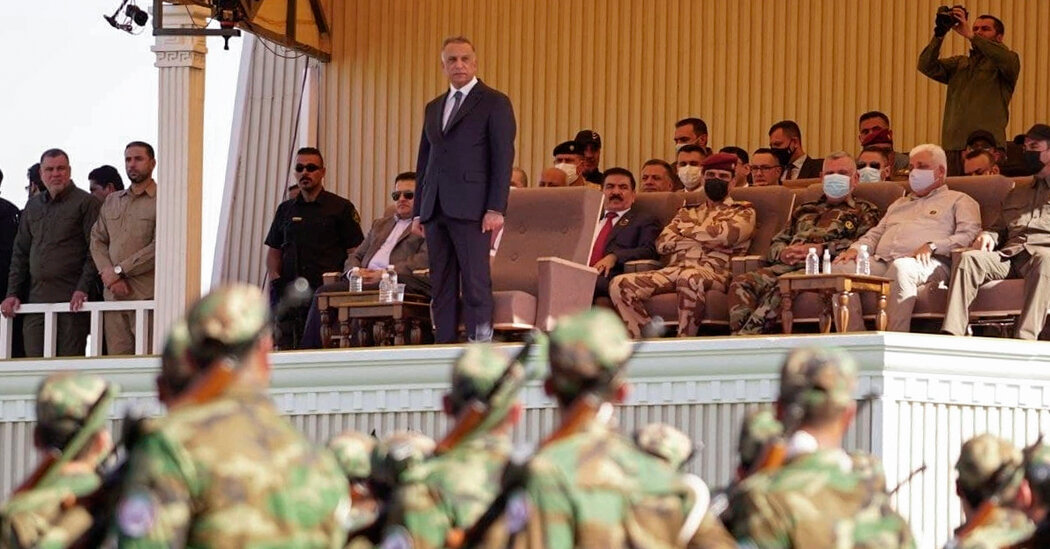 The Iraqi government on Monday condemned U.S. airstrikes on Iranian-backed militias near the Iraqi-Syrian border, and one of the paramilitary groups targeted in the attacks vowed “open war” against American interests in Iraq.

President Biden authorized the strikes against what the Pentagon said were facilities being used in attacks launched against U.S. forces in Iraq. The Pentagon said that two of the targets were just across the border into Syria and that the third was inside Iraq.

In a statement, the Iraqi government condemned the strikes as a “blatant and unacceptable violation of Iraqi sovereignty and national security.” The statement, issued by Maj. Gen. Yahya Rasool, military spokesman for Prime Minister Mustafa al-Kadhimi, called for avoiding escalation and said that Iraq did not want to be turned into an “arena for settling accounts” — a reference to the conflict between the United States and Iranian proxies in Iraq.

The American strikes were the latest escalation in tensions over recent revelations that Iranian-backed militias in Iraq had increasingly been using small, explosive-laden drones in late-night attacks on Iraqi bases, including those used by the C.I.A. and U.S. Special Operations units, according to American officials.

The strikes are expected to increase pressure on Mr. al-Kadhimi to order the remaining U.S. forces out of Iraq. Those forces are largely deployed to help Iraq fight remnants of the Islamic State. While Iraqi military leaders have said that they welcome continued help from the U.S.-led coalition, Mr. Kadhimi is being pushed hard by Iranian-backed political parties to expel them.

One of the groups hit by the American airstrikes, Kata’ib Sayyid al-Shuhada, said that four of its fighters stationed along the border had been killed in the strikes.

“From now on, we will go to open war with the American occupation, the first action of which is targeting the enemy planes in beloved Iraq’s sky,” the group said in a statement.

Kata’ib Sayyid al-Shuhada and Kata’ib Hezbollah, the other militia group targeted, are part of the Popular Mobilization Forces, which formed to fight the Islamic State in Iraq in 2014. The forces were later merged into the Iraqi government’s security forces.

But many of the Iranian-backed groups that are part of the Popular Mobilization Forces are only nominally under control of Baghdad.

John Kirby, Pentagon press secretary, said that the strikes, carried out by F-15 and F-16 fighter, were intended to limit the risk of escalation while sending a message of deterrence. He described them as self-defense and limited in scope.

The command of the Popular Mobilization Forces said that the strikes targeting two of its brigades had been carried out about 10 miles from the border with Syria in the Iraqi town of Qaim in the western province of Anbar. It said that the casualties had been stationed at the border to prevent Islamic State fighters from infiltrating from Syria.

The Popular Mobilization Forces denied Pentagon claims that weapons storehouses were targeted and said that the airstrikes had targeted its fighters instead.

An umbrella group for the Iranian-backed armed groups in Iraq, the Iraqi Resistance Coordination, vowed revenge and said it would continue to target U.S. forces.

“We will avenge the blood of our righteous martyrs against the perpetrators of this heinous crime and with God’s help, we will make the enemy taste the bitterness of revenge,” the group said in a statement.

Saeed Khatibzadeh, spokesman for the Iranian Foreign Ministry, said that the United States was disrupting the security of the region through the attacks.

The airstrikes were the second in the same area authorized by Mr. Biden since he came to power and the first since elections in Iran this month that saw the hard-liner Ebrahim Raisi become president.

Although bodies are normally buried the same day under Islamic tradition, the Popular Mobilization Forces said that it would hold a public ceremony in Baghdad on Tuesday morning to transport the remains of those killed in the airstrike and to express condemnation of the attack.