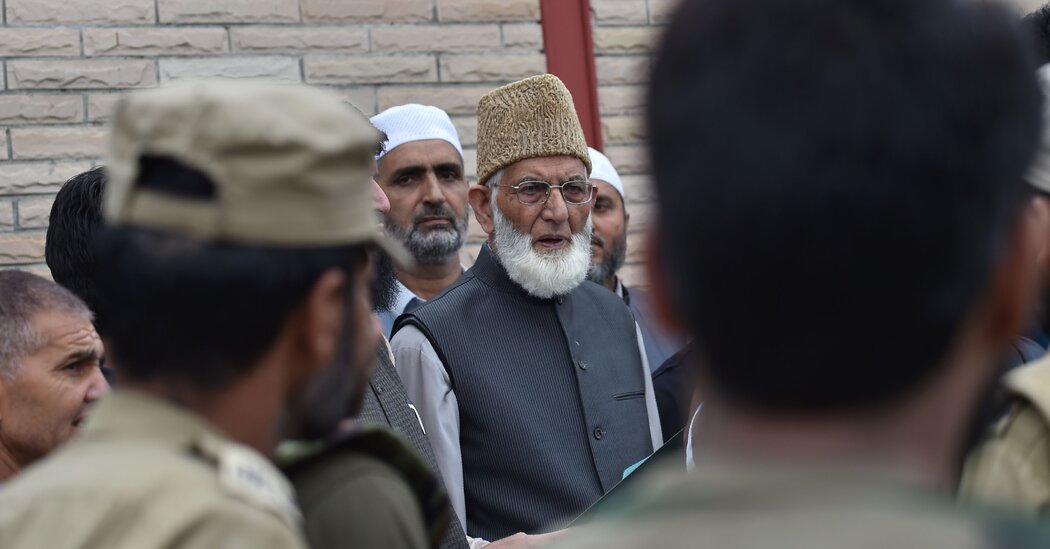 SRINAGAR, Kashmir — Syed Ali Geelani, an influential and uncompromising leader of the separatist movement of Kashmir who refused to engage with India over the future of the troubled Himalayan region, died on Wednesday while under house arrest in Srinagar, Kashmir’s biggest city. He was 91.

His death was confirmed by his son, Naseem Geelani. He did not specify a cause but said his father had been suffering from heart and kidney disease over the past two decades and age-related issues, including dementia, recently.

Even in death, Mr. Geelani showed he could make the region’s Indian-led authorities nervous. The internet was shut down across the Kashmir valley. Increased security forces patrolled empty streets.

The police took away his body just hours after he died, Naseem Geelani said, leading to a quiet funeral for a resistance leader once able to summon thousands of people to the streets to protest.

For years, Mr. Geelani resisted dialogue with India over the future of Kashmir, the picturesque valley of eight million people, most of them Muslim. Controlled by India, the valley is also claimed by Pakistan. Their bitter territorial dispute has fueled decades of bloodshed.

Mr. Geelani had long argued that the valley should fall under Pakistan’s control because of its geographical and religious affinity with the largely Muslim country. He said India should remove its troops from Kashmir and hold a vote once promised by India’s government over whether Kashmir should be part of India or Pakistan, though he hinted in recent years that he would side with independence if that option were to prevail in a referendum led by the United Nations.

In a tweet on Thursday, Imran Khan, the prime minister of Pakistan, said Mr. Geelani had “struggled all his life for his people and their right for self determination.” He said Pakistan would observe an official day of mourning.

Officials in Kashmir and in India’s central government, which long regarded Mr. Geelani as a major hurdle toward resolving the region’s violence, declined to comment. One former government official, Satya Pal Malik, whom he had publicly targeted with his rhetoric said he was “kind and very decent.”

“I have fond memories of him,” said Mr. Malik, the former governor of Jammu and Kashmir, the state that administered Kashmir until the Indian government disbanded it as part of a regional crackdown two years ago. Mr. Malik added, “his death should not be politicized or exploited politically by any section.”

The Kashmir valley has long been under the control of Indian security forces. In recent years, India’s Hindu-nationalist government has made taming Kashmir a top priority.

A charismatic leader, Mr. Geelani was often called “Bab,” or “father” in Kashmiri, and he won popularity by remaining steadfastly resistant to Indian rule. One popular chant during demonstrations: “The one who doesn’t bow: Geelani! The one who can’t be bought: Geelani!”

“He was the most recognized face of Kashmiri resistance against India and an iconic political figure,” said Noor Ahmad Baba, a political analyst in Kashmir. “No other political figure from the valley matched his popularity.”

The authorities had long kept Mr. Geelani under their watchful eye. With only a few breaks, he had been under house arrest for 11 years.

Mr. Geelani’s opposition to engaging with New Delhi was at odds with other factions of the All Parties Hurriyat Conference, an umbrella group of organizations seeking self-determination for Kashmir. India, he argued, pursued negotiations on the basis that Kashmir was an integral part of the country, a position he rejected.

His rigid anti-negotiation stance at times put him at odds even with his sympathizers in Pakistan. In 2006, Pervez Musharraf, then Pakistan’s military dictator, unveiled an ultimately unsuccessful four-point formula to settle the Kashmir dispute with India. Mr. Geelani rejected it.

Despite his popularity in Kashmir, he had many critics who dismissed his often strict Islamic worldview. They also faulted him for failing to support the region’s independence movement, which sparked violence against Indian forces in 1989.

Syed Ali Shah Geelani was born on Sept. 29, 1929, in Zoori Munz, a village in northern Kashmir, into a poor family that subsisted on manual labor. He attended school in the town of Sopore. He graduated from high school in 1945 and went to Lahore, Pakistan, to study the Quran, and he later earned a bachelor’s degree in Persian literature.

Mr. Geelani was imprisoned in 1962 for 13 months for participating in anti-India activities. He was arrested again in 1965 and spent more than a year in prison for nurturing secret contacts in Pakistan.

The arrests and jailings continued after he joined an Islamist organization, Jamaat-e-Islami, and was elected to the state assembly in 1972. Indian authorities seized Mr. Geelani’s passport in 1981 and never returned it, barring an exception in 2006 to let him travel to Mecca in Saudi Arabia for the Muslim hajj pilgrimage.

In the 1980s, he began calling for public protests and resistance and found a receptive audience among angry Kashmiris. After violence broke out in 1989, the beginning of more than 30 years of conflict, Mr. Geelani became perhaps the movement’s most visible leader. His calls for workers to strike could shut down activity in the Kashmir valley for days. He was a fixture at the funerals of those who died fighting Indian forces.

Indian authorities sometimes tried to get Mr. Geelani to ease tensions. In 2016, protests and violence eruption after Indian police killed a militant commander, Burhan Wani. In response, Mr. Geelani and other resistance leaders laid out “protest calendars” that dictated when demonstrations would be held and when shops would open and close. Indian officials tried to talk him and other leaders out of it, but Mr. Geelani refused to take part, calling the outreach a “mere optic for Indian media.”

Mr. Geelani’s influence ebbed in recent years. Last year he resigned as the leader of the Hurriyat Conference, citing infighting within the group and its inability to stop India’s 2019 crackdown, which swept aside a degree of autonomy that New Delhi had long extended to the region.

He married twice. Besides two daughters from a previous marriage, Anisha and Farhat, he is survived by his wife, Jawahira Begum, and two daughters, Zamshida and Chamshida, and two sons, Nayeem and Naseem.

Despite his age and growing frailty, Mr. Geelani remained defiant.

In a video posted online in 2018, Mr. Geelani knocks at the door of his home from the inside, telling Indian soldiers to let him out so that he could offer prayers at the funeral of a relative.

“Open the door. I won’t fly away,” Mr. Geelani tells the officers. “We want to perform a funeral for your democracy.”

Why K.K. Downing Is 'Surprised' by Judas Priest's Recent Output