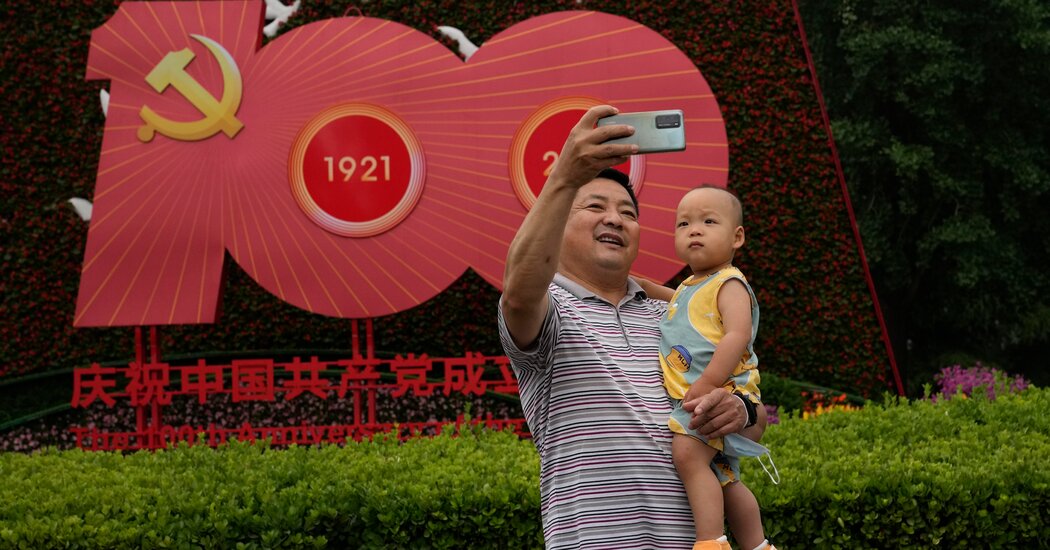 China’s Communist Party on Thursday is celebrating the 100th anniversary of its founding, an event at which it is expected to argue that the country can keep ascending only if the party remains firmly in power.

The organizers have disclosed little about how the day’s pomp will unfold, but the official highlight will be a speech by Xi Jinping, China’s leader. Major policy announcements are unlikely, but the centenary is symbolically important for Mr. Xi, who is almost certain to claim a third five-year term as party leader next year.

If his recent comments are a guide, he is likely to assert that China would never have achieved its present-day prosperity and power without the party’s struggles against foreign oppression and domestic exploitation.

China’s setbacks over the past decades of Communist Party rule — such as Mao’s Cultural Revolution and the deadly crackdown against protests in Tiananmen Square in 1989 — may receive brief mention, or none at all.

Instead, the day’s stagecraft will focus on conveying an image of China as confident and secure while much of the world struggles to shake off the pandemic.

Officials have said there will be no military parade, unlike the enormous show of force that marked the 70th anniversary of the People’s Republic of China in 2019.

Even so, the televised celebrations appear likely to feature a military flyover at Tiananmen and displays of military forces across the country.

Organizers may also assemble a carefully picked crowd at Tiananmen Square — of party members, workers, students and others — to listen to Mr. Xi’s speech. Rain is possible, so they and the organizers will be hoping that it holds off in the morning.

When China’s leader, Xi Jinping, takes his place on a deck overlooking Tiananmen Square in central Beijing on Thursday, he will strike a confident posture signaling China’s rising prosperity and influence in the world.

Since becoming general secretary of the Communist Party in late 2012, Mr. Xi, 68, has made it increasingly clear that he sees himself as a transformative leader — in the footsteps of Mao and Deng — guiding China into a new era of global strength and rejuvenated one-party rule. And by many measures he is already the most powerful leader since Deng or even Mao, and presides over an economy and a military much stronger than in their times.

He was born into a revolutionary family, endured the upheavals of Mao Zedong’s era, and began his career as a party official when Deng Xiaoping and other leaders opened up market reforms.

Before Mr. Xi came to power, many in China thought that he would be a milder figure, because his father, Xi Zhongxun, was a revolutionary veteran who in the early 1980s oversaw the beginnings of market reforms in Guangdong Province.

Xi Zhongxun had suffered decades of confinement and persecution after Mao turned against him, and his family was torn apart during Mao’s Cultural Revolution. Like millions of other youths at that time, the younger Mr. Xi was sent to labor in the countryside, and he spent seven years in a dusty village in northwest China.

But after coming to power, he pursued scorching crackdowns against official corruption and domestic dissent, and applied harsh measures to bring areas like Xinjiang and Hong Kong firmly under Chinese control.

Mr. Xi appears driven by the conviction that for China to secure lasting stability and prosperity, the Communist Party must reassert its control, and he must remain in command of the party.

In 2018, he abolished the two-term limit on the Chinese presidency, opening the way to remain in office — as president, party leader and chairman of the Chinese military — for many years to come. His next big step in that journey will be next year, when a Communist Party congress appears likely to acclaim him for a third term as party leader.

In addition to the centenary of the party’s founding, July 1 also marks the anniversary of Hong Kong’s handover from Britain to China in 1997.

The passage of a contentious national security law in 2020 ushered in one of the most transformative years in the city’s history since the end of British colonial rule.

With each day, the boundary between Hong Kong and the rest of China fades faster.

The Chinese Communist Party is remaking this city, permeating its once vibrant, irreverent character with ever more overt signs of its authoritarian will. The very texture of daily life is under assault as Beijing molds Hong Kong into something more familiar, more docile.

Now, neighbors are urged to report on one another. Children are taught to look for traitors. Officials are pressed to pledge their loyalty.

Hong Kong had always been an improbability. It was a thriving metropolis on a spit of inhospitable land, an oasis of civil liberties under iron-fisted rule. After its return to China in 1997, the city was promised freedoms of speech, assembly and the press unimaginable in the mainland, in an arrangement Beijing called “one country, two systems.”

Hong Kong had always been an improbability. It was a thriving metropolis on a spit of inhospitable land, an oasis of civil liberties under iron-fisted rule. A former British colony that returned to China in 1997, the city was promised freedoms of speech, assembly and the press unimaginable in the mainland, in an arrangement Beijing called “one country, two systems.”

Freedoms once at the core of Hong Kong’s identity are disappearing. The government announced that it would censor films deemed a danger to national security. Some officials have demanded that artwork by dissidents such as Ai Weiwei be barred from museums.

China’s new might has also declared itself in Hong Kong’s business world. For decades the mainland’s economy had raced to catch up with that of Hong Kong, the financial hub so proud of its global identity that its government billed it as “Asia’s world city.”

Now, China’s economy is the booming one and officials are bending Hong Kong’s global identity increasingly toward that one country.

Hong Kong was wrapped in an extensive security bubble on Thursday as the city marked three political anniversaries that have helped transform it from a freewheeling international center of trade and finance to an increasingly constrained Chinese city.

Thousands of police officers fanned across the city to clamp down on any unauthorized gatherings and prevent people from gathering in Victoria Park, where the annual July 1 march traditionally begins.

July 1 is both the 24th anniversary of Hong Kong’s return to Chinese control and the 100th anniversary of the founding of China’s ruling Communist Party. And just over one year ago, late on the evening of June 30, 2020, a sweeping national security law was imposed on the city by Beijing.

The day has long been marked by public protest in Hong Kong, but an application to demonstrate on Thursday was rejected by the police. The official reason was the coronavirus pandemic, but activists said they believed the demonstration was banned for political reasons, as local case numbers were low and other public events like soccer matches and concerts have been allowed to go ahead.

With Carrie Lam, Hong Kong’s chief executive, in Beijing to participate in the party anniversary celebration, her chief deputy, John Lee, led a morning flag-raising ceremony in the same spot along Victoria Harbor where the 1997 handover was conducted after more than 150 years of British colonial rule.

In the year since the security law came into effect, many of the city’s most prominent opposition politicians have been arrested, with dozens still held in jail. The electoral system was transformed, with directly elected seats cut and security agencies given vast power to vet candidates. Apple Daily, the city’s largest pro-democracy newspaper, was forced to close last week, and RTHK, the once proudly independent public broadcaster, has been gutted.

The law also authorized Chinese security agencies to openly operate in Hong Kong. In a rare interview this week, Zheng Yanxiong, director of the national security office in Hong Kong, issued a stern warning to the city’s judges, whose reputation for independence has come under pressure since the security law took effect.

The power of the independent judiciary is authorized by China’s legislature, Mr. Zheng told East Week, a pro-Beijing magazine. “It must implement the nation’s will and the nation’s interest, otherwise it will lose the premise of that authorization,” he said.

The Communist Party’s grip has grown increasingly visible in Hong Kong, where it was once outlawed. Mrs. Lam’s trip to Beijing for the anniversary is the first by a Hong Kong chief executive for the event. And the anniversary has been publicized on buses, trams and a set of commemorative stamps in Hong Kong.