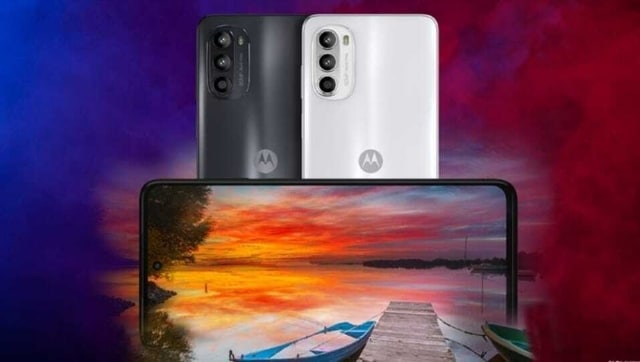 Motorola launched the Moto G52 smartphone in India today. The Moto G52 is not essentially a new phone as it was launched in Europe recently for a price of EUR 249. The salient features of the phone, and the price, make the latest budget phone from Motorola a rather good and alluring product for people looking for a capable, but an affordable smartphone. The Moto G52 comes with a 6.6-inch Full-HD pOLED display with a refresh rate of 90Hz. The panel that Motorola is using allows them to go for very thin bezels which gives the phone a much more premium appeal. We also find a punch-hole cutout which houses the front camera. This, Motorola claims, makes the Moto G52 one of the slimmest and lightest phones in India. The new panel is also extremely tough, and is more durable than your standard OLED panels that is used in phones, claim Motorola.

Speaking of cameras, the front-facing camera of the Moto G52 is a 16MP shooter. The rear camera housing is equipped with a triple camera setup with the main shooter being a 50MP camera accompanied by an 8-megapixel ultrawide camera and a 2-megapixel depth-sensing camera.

The Moto G52 is being driven by an Octa-core QualcommSnapdragon 680 SoC which is paired with up to 6GB of RAM and 256GB of internal storage. There will be two variants that will be readily available – a 4GB RAM + 64GB unit and a different, 6GB RAM + 128 GB unit. Both of these variants come with a feature called RAM Boost, which uses some of the internal storage space as RAM, which effectively gives both the devices about 8GB of total RAM.

The device also has a fingerprint scanning system on the side and features stereo speakers with Dolby Atmos support. Oh, and the Moto G52 also gets a 3.5mm headphone jack, making Motorola one of the last mainstream smartphone makers to still include it.

The Moto G52 comes with Android 12 out of the box and has Motorola’s MyUX skin on top integrated into the OS.

Powering the device is a 5000mAh battery which also supports 30W fast charging.

The Motorola G52 is available at an introductory price of Rs 14,499 for the 4GB+64GB variant, at all leading retail stores in India and only at Flipkart if you were looking to buy the phone online, from 3rd May 2022.

The second variant, the one with 6GB+128GB modules, has been priced at Rs 16,499. The box prices are a little higher, so you are likely to find much better deals on e-commerce platforms.