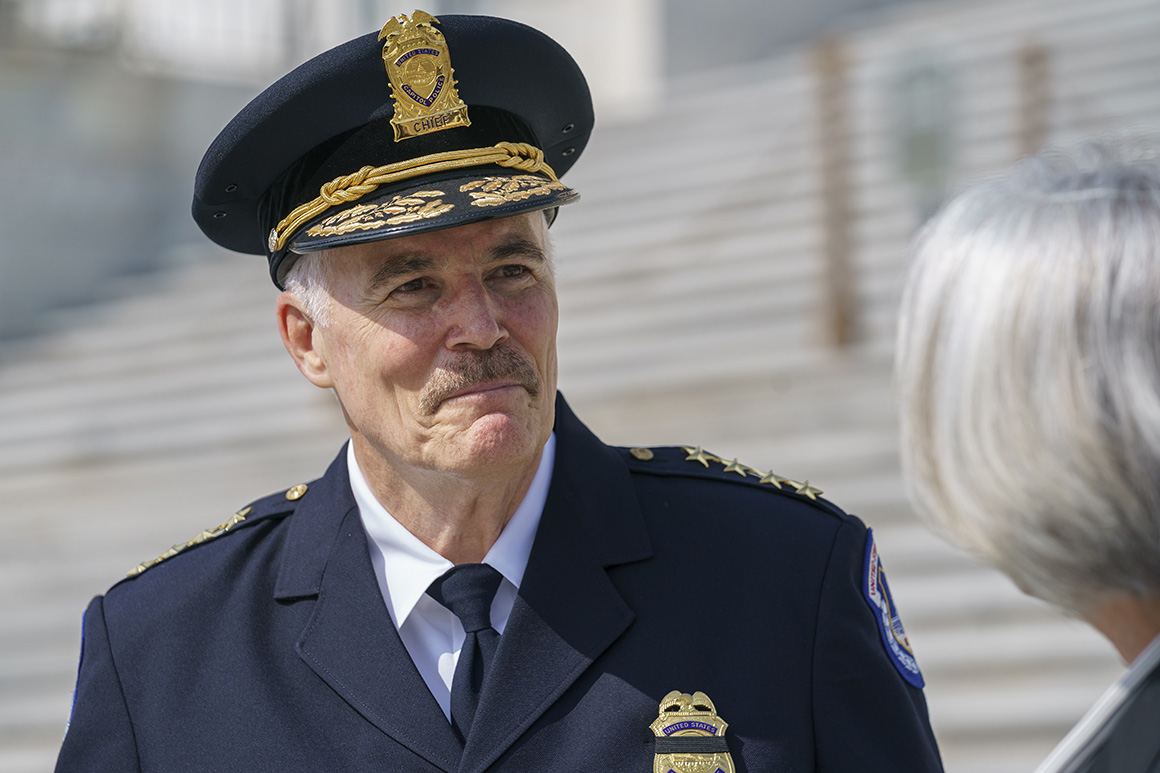 Union chairman Gus Papathanasiou confirmed the two have not yet spoken.

He’s assuming the top position at a time when rank-and-file officers don’t have much confidence in the leadership team, which has faced scalding criticism in the wake of the Jan. 6 attack from the USCP Inspector General, an outside analysis from Lt. Gen. Russel Honore and a Senate investigation. Two Capitol Police officers are set to testify next week before a House select committee about their experiences during the insurrection, which will likely mention leadership failures.

Capitol Police union officials say the force is quickly approaching a crisis both of bruised morale and dwindling numbers, as officers look to leave and a significant wave are soon eligible for retirement.

Manger will have to stem the tide of officers looking for the exit and also shape the department into a force that attracts new recruits.

“Retention strategies will be a big part of my efforts here to make sure that we can keep the good cops that are here, as well as add additional staffing if we’re able to get more positions,” Manger said.

Three Capitol Police officers have died this year, marking one of the hardest stretches the department has faced in its history.

Many officers, even those who came through the first half of 2021 without physical injuries, are struggling with their mental health, and lawmakers and union leaders say the department needs to take mental health considerations seriously going forward.

Acting USCP Chief Yogananda Pittman and six other top officials received votes of no confidence from the department union in February regarding their ability to lead the force after the Jan. 6 insurrection. At least one, Chad Thomas, has since left the force.

Manger complimented Pittman on her six months leading the department in the midst of a crisis and her implementation of the scores of recommendations made by the many investigations and evaluations of the department in recent months.

“I’d certainly be pleased to have her remain on my leadership team,” Manger said.

His department also faces a potential cash crunch heading into next month. Facing increased overtime costs from responding to the worst attack on the Capitol since the War of 1812, the force may run out of money to pay officers’ salaries in August, though it might be able to take measures to reprogram existing funds to pay officers.

Manger hasn’t yet had a chance to dive into the USCP ledgers, but he projected confidence that the department would figure out how to handle the expected funding cliff in upcoming weeks.

“I’m confident that we’ll work our way through this,” he said, when asked if the department would have to furlough officers if Congress doesn’t act to provide additional funding.

Top appropriators in the Senate are still working on an emergency spending bill that they hope can avert a devastating funding gap that they’ve warned could result in furloughs of officers. The department has already delayed the purchase of critical protective equipment, including ballistic helmets, respirators and “hard gear” used during civil disturbances.

Eighty officers were seriously injured during the insurrection, according to the Capitol Police union. Not all officers had the equipment they needed when rioters attacked the Capitol on Jan. 6, or the equipment was old and damaged.

The department has also delayed training sessions and wellness programs meant to address mental health following the Jan. 6 attack and the deadly vehicle attack on the Capitol in April.

A deal to relieve the department’s financial stresses could come as soon as next week, according to Sen. Richard Shelby of Alabama, the top Republican on the Senate Appropriations Committee.

Manger is a veteran of Washington, D.C.-area police departments and has served in law enforcement for over 40 years. He spent 15 years as the police chief of Montgomery County, Md., and was also the police chief of Fairfax County, Va. After retiring from the Montgomery County department, Manger lobbied Congress on everything from drone legislation to gun control on behalf of the Major Cities Chiefs Association, a group representing police chiefs and sheriffs, though he ceased the work in May 2020.

He’s no stranger to politics. In a 2016 interview with Bethesda Magazine, he said he’d been inspired by the Washington Post’s coverage of the Watergate scandal to try to right injustices in the world. At the time, his father worked for then-Vice President Spiro Agnew, who later resigned from the position under allegations of corruption.

The Capitol Police have long been a notoriously opaque and secretive agency. They held no press conferences in the months following the Jan. 6 attack until an officer died during a car attack at the Capitol at the beginning of April.

When asked if he’d hold briefings with the press, Manger said “if there’s something to talk about, yeah.”

The new chief says he is committed to keeping the public informed, a pledge that other USCP chiefs have made, but not necessarily kept. He pointed to his record in Maryland and Virginia as evidence that the department under his leadership could be more open.

“I do think that chiefs have a responsibility to let the public know what we’re doing and why we’re doing things,” said Manger. “And so I don’t see myself changing in terms of my relationship with, with the press.”