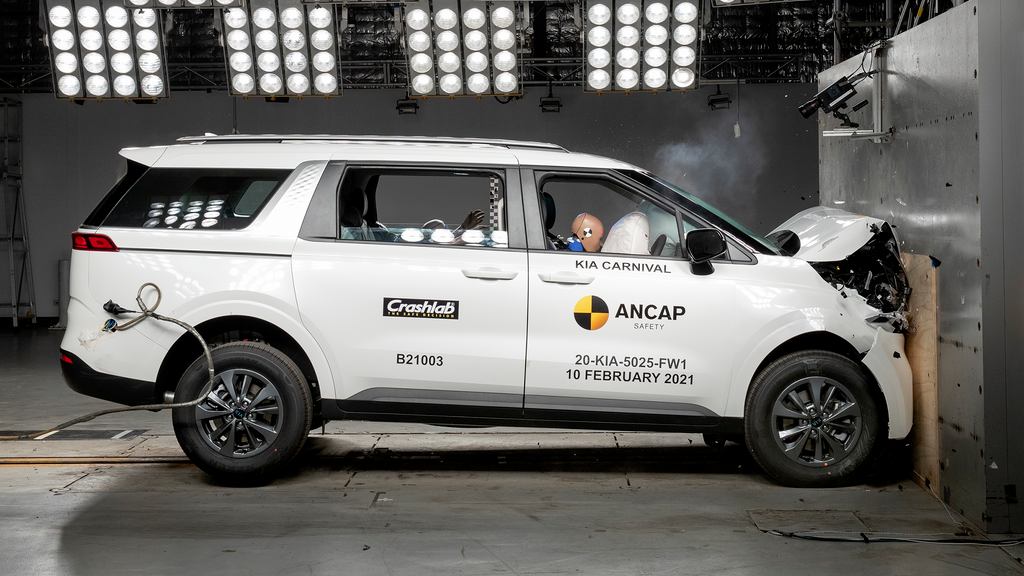 ANCAP subjected the 2022 Kia Carnival to a full-width frontal crash test at a speed of 50 kph. Image: ANCAP

The MPV features top tether and ISOFIX anchorages for five of its six rear seats, and ANCAP only marked it down in this department as one of the Type-A convertible restraints could not be correctly installed in rearward-facing mode using the ISOFIX anchorages in the second row outboard seats or the third row.

Notably, the Carnival’s autonomous emergency braking (AEB) system notched up ‘very good’ results in the tests, with collisions avoided or mitigated in all vehicle-to-vehicle test scenarios. Similarly, the Carnival’s ability to detect and react to pedestrians was rated ‘good’, while cyclist detection was rated ‘adequate’.

The Australia- and New Zealand-spec Kia Carnival comes with a long list of safety features. Dual front and side head-protecting airbags (for all three rows), side chest-protecting airbags (first row only), and a driver knee airbag are standard, as are AEB, lane keep assist, lane departure warning, emergency lane keeping and an advanced speed assistance system.

However, while the Carnival may have had a stellar showing down under, in the USA, the new-gen model has already been recalled to address a potentially dangerous issue. The National Highway Transportation Safety Administration (NHTSA) has issued recalled 2,744 units of the new Carnival to replace a damaged fuel rail tube. While only a fraction of those vehicles are expected to have the damaged tube, it’s a serious risk, as the prospect of a fuel leakage near the engine poses a major threat.

In India, it’s the older-generation Kia Carnival – launched at Auto Expo 2020 – that continues to be on sale. Kia management has confirmed the company is evaluating the right time to bring the new-generation Carnival to the Indian market, and it could well arrive on our shores sometime in 2022. Interestingly, Kia India chose to leave the old Carnival out of its rebranding exercise, opting instead to only put its new logo on the Seltos and Sonet SUVs. At this time, there’s no word on if the older Carnival will get the new Kia insignia.

Podcast: The Institute of Illegal Images