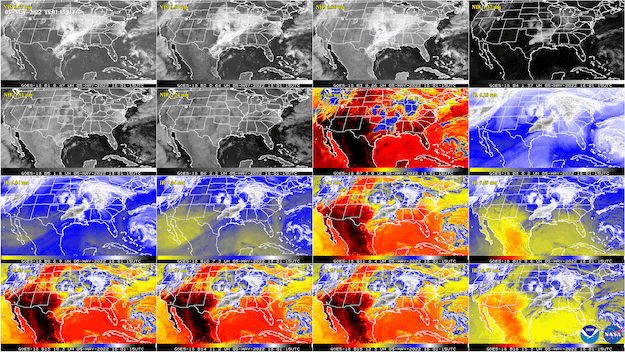 On May 11, 2022, NOAA shared the first images of the Western Hemisphere from its GOES-18 satellite. The satellite’s Advanced Baseline Imager (ABI) instrument recently captured stunning views of Earth.

This GOES-18 image (larger view) shows the contiguous United States observed by each of the ABI’s 16 channels on May 5, 2022. This 16-panel image shows the ABI’s two visible, four near-infrared and 10 infrared channels. The visible and near-IR bands are gray-colored, while the infrared bands have the warmer brightness temperatures mapped to warmer colors. The different appearance of each band is due to how each band reflects or absorbs radiation. Each spectral band was scanned at approximately the same time, starting at 18 UTC.

GOES-18 orbits 22,236 miles above the equator at the same speed the Earth rotates. This allows the satellite to constantly view the same area of the planet and track weather conditions and hazards as they happen.

Data from multiple ABI channels can be combined to create imagery that approximates what the human eye would see from space–a result known as GeoColor. Combining data from different channels in different ways also allows meteorologists to highlight features of interest.

Recently, GOES-18 observed a number of weather events, environmental phenomena, and striking views of our planet. Storms across east Texas produced large hail, strong wind gusts, and tornadoes. Farther west in New Mexico, strong winds resulted in large areas of blowing dust and expansion of large wildfires. Fog blanketed parts of Chile in South America, and clouds and some thunderstorms formed along sea breezes in the Yucatan and south Florida.

GOES-18 is currently undergoing post-launch testing, validation and calibration of its instruments and systems to prepare it for operations. The ABI cooling system is performing well, with no signs of the issue that affects its sister satellite, GOES-17. The ABI was redesigned for GOES-18 to reduce the likelihood of future cooling system anomalies. The new design uses a simpler hardware configuration that eliminates the filters that are susceptible to debris.

GOES-18 will assist GOES-17 with GOES West operations in late summer 2022 and again in early fall. NOAA plans for GOES-18 to replace GOES-17 as GOES West in early 2023. Imagery from GOES-18 during the post-launch testing phase should be considered preliminary and non-operational.