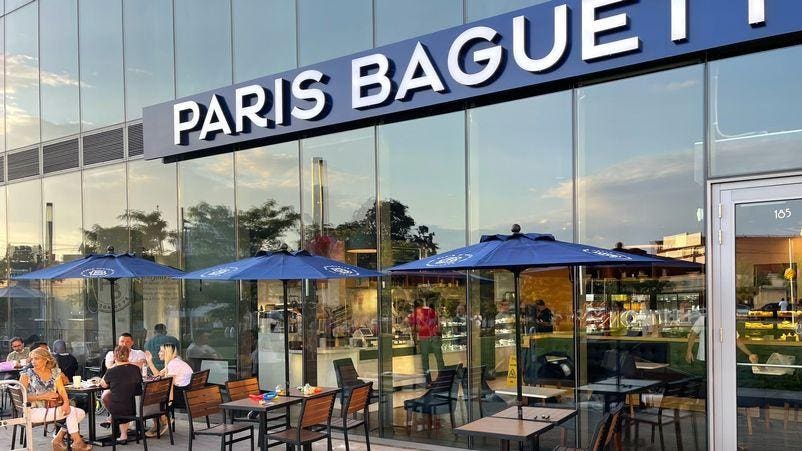 After the pandemic slowed down a bit, Paris Baguette, the global bakery chain, saw its sales in the U.S. rise and started an ambitious franchising effort.

Paris Baguette is owned by the SPC Group, a South Korean-based company that manufactures food and bread products and also owns BR Korea, a donut and ice-cream chain.

Despite Paris Baguette’s describing itself as “your neighborhood bakery café,” it owns over 4,000 units globally including 3,600 in Korea and 240 in China but just two in its namesake of Paris.

In the U.S., Paris Baguette is much smaller than in Asia, with 99 locations in the states with 73 franchised and 25 corporate-owned, but it’s primed for growth. It’s located in 12 states, mostly the most populated states such as California, Texas, New York, Pennsylvania, Michigan and Massachusetts.

In 2021, it opened 10 stores in the states, has five more slated to open in 2022, with ambitious goals to open 56 by the end of the year, to bring it to over 150 storefronts domestically. Of the 56 new outlets, 51 will be franchised and five are corporate-owned.

Part of what has been prompting this expansion has been a rise in sales in the U.S. Mark Mele, its chief development officer, based in Moonachie, N.J., said sales spiked an impressive 44% in year-over-year sales in the U.S. in 2021.

SPC Group “want us to have 1,000 units by 2030. And they want us to remain true to the spirit of the brand of Paris Baguette since it started in 1998 as a bakery café,” noted Mele.

The franchisees hail from a variety of backgrounds but many are Korean immigrants familiar with the brand from their home country, people with restaurant and business backgrounds, and multi-unit developers as well.

To grow by mainly franchising, “everyone has to be on board, including creating processes for franchise sales, real-estate, construction and design. If you put them all together, you’ll be able to scale,” he said. Mele should know since he has 37 years of expertise in the franchise development industry before joining Paris Baguette 19 months ago.

Mele acknowledged that 2020 “was a smack in the face” because of the pandemic for the restaurant chain. But in 2021, “we saw more people wanting to go to locations and sales increased as restrictions lessened,” he said.

Candidly, Mele admitted that “we didn’t do anything differently. It wasn’t due to Doordash or delivery sales. It was people coming to the cafés, and we were more of an indulgent brand.”

By indulgent brand, he explained that about 40% of its sales stems from cakes, 20% pastries, 20% sandwiches and 10% coffee.

People would be dining out at other eateries and would then stop by Paris Baguette for dessert. Hence, he calls it an “indulgent” time to relieve stress during the pandemic.

Moreover, he noted that Paris Baguette has remained true to its bakery roots while many of its competitors such as Panera and Au Bon Pain have become eateries, specializing in sandwiches, not baked goods. He contends that private equity money focused on earnings has been moving those brands to becoming more diversified to generate revenue.

Due to the pandemic, Paris Baguette also faced some setbacks and was forced to close six retail shops in the U.S. in 2021. In busy Greenwich Village, for example, the Paris Baguette on West 14th shuttered. Mele said that some of those franchisees were “undercapitalized,” which led to their closing.

It has redesigned its locations in the U.S. to create what it calls an “immersive experience” so the guests can see the bakers and cakemakers preparing breads and pastries. “We call it theatre,” Mele said.

In spring 2022, it introduced some specials including its mochi donuts, which are blood orange and yuzu, and two new brioche products, with strawberries and berries.

Despite its global presence, it aims to connect locally with initiatives such as Dough Raiser, a local collaboration between community non-profits organizations and schools, and Cake Day, where all proceeds on day are donated to local non-profits.

Mele describes the keys to its future success as: 1) Maintaining quality, 2) Getting the consumer to be familiar with who we are, 3) Making sure we deliver on our promises to bring 1,000 units in the next few years.