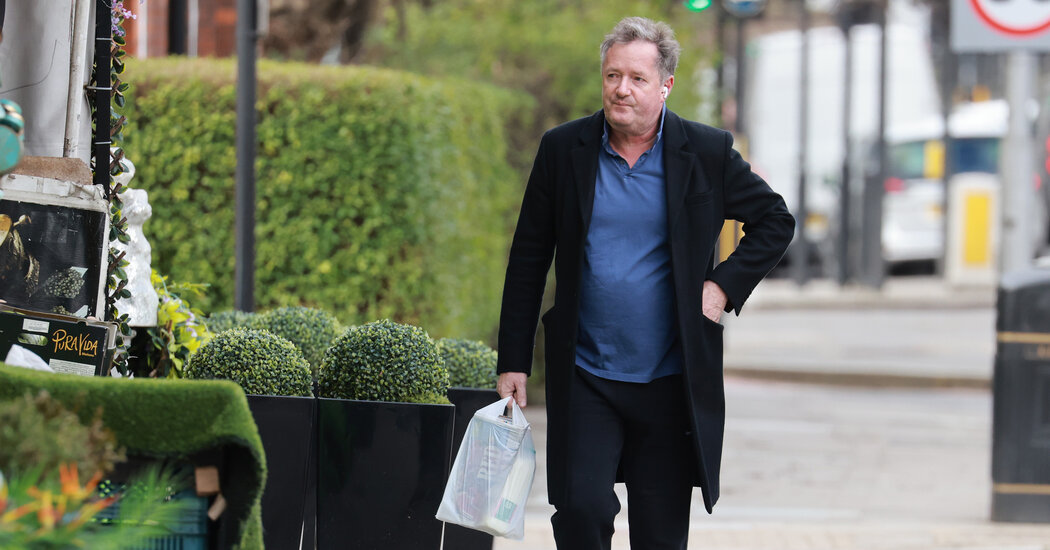 LONDON — The British TV personality Piers Morgan was cleared on Wednesday by Britain’s communications regulator over critical comments he made on air about Meghan, the Duchess of Sussex, after her bombshell interview with Oprah Winfrey.

Mr. Morgan had been under investigation by Ofcom, the media regulator, which received a record number of complaints in March after he criticized Meghan on air and said he did not believe her accounts of being poorly treated by the royal establishment.

In a 97-page ruling outlining the decision, Ofcom said that “Mr. Morgan was entitled to say he disbelieved the Duke and Duchess of Sussex’s allegations and to hold and express strong views that rigorously challenged their account.”

In an interview broadcast in March, Meghan — a biracial former actress from the United States known for her role in the legal drama “Suits” and for her marriage to Prince Harry in 2018 — told Ms. Winfrey that when she was pregnant with her first child, an unnamed member of the royal household expressed concerns about how dark the color of the baby’s skin would be. Meghan also said that palace officials refused her requests to seek mental health treatment when she said she had become suicidal.

Responding on ITV’s “Good Morning Britain” to Meghan’s claims, Mr. Morgan, who formerly anchored the daytime show, said he did not believe the duchess. More than 50,000 complaints about his criticism were lodged with the British media watchdog, including one filed by Meghan herself.

Mr. Morgan stormed off the set of the show, and later resigned, after his co-host Alex Beresford admonished him for his persistent criticism of Meghan. Ofcom announced the next day that it had opened an investigation into Mr. Morgan’s comments under its “harm and offense” rules.

On Wednesday, Mr. Morgan expressed delight on Twitter about the decision to clear him, writing that it was a “resounding victory for free speech and a resounding defeat for Princess Pinocchios.”

In his tweet, Mr. Morgan asked if he would get his old job back. In a statement, ITV said it welcomed the ruling that “Good Morning Britain” did not breach broadcasting standards, but added that it had “no current plans” to invite Mr. Morgan to present the daily morning show.

In an opinion article he wrote for The Daily Mail newspaper in response to Ofcom’s decision, Mr. Morgan wrote: “Make no mistake, this is a watershed moment in the battle for free speech. If Ofcom had found against me, that would have signaled the end of every U.K. TV journalist’s right to express any honestly held opinion on air lest it upset the likes of Meghan Markle.”

After the prime-time interview with Ms. Winfrey aired, the Duke and Duchess of Sussex were thrust into the center of a national debate around race, mental health and the royal family that divided the British public.

Harry and Meghan blamed the British press for driving them out of the country with its relentless attacks on the duchess, but the Society of Editors, an influential news media society, denied that racism had been a factor in coverage of the couple. The organization later made an embarrassing U-turn after more than 160 journalists of color signed an open letter rejecting that contention.

In January 2020, the couple announced that they would “step back” from their official royal duties, with the intention of dividing their time between Britain and North America. This year, Buckingham Palace announced that Harry was to be stripped of his honorary military titles and royal patronage appointments.

Harry and Meghan later founded their own production company, Archewell Productions, named after their charitable foundation, and signed a multiyear deal with Netflix to make programming like documentaries, feature films and shows for children. Archewell did not immediately respond to a request for comment.

In June, the couple — who already had a son, Archie Harrison Mountbatten-Windsor — welcomed a daughter, Lilibet Diana.