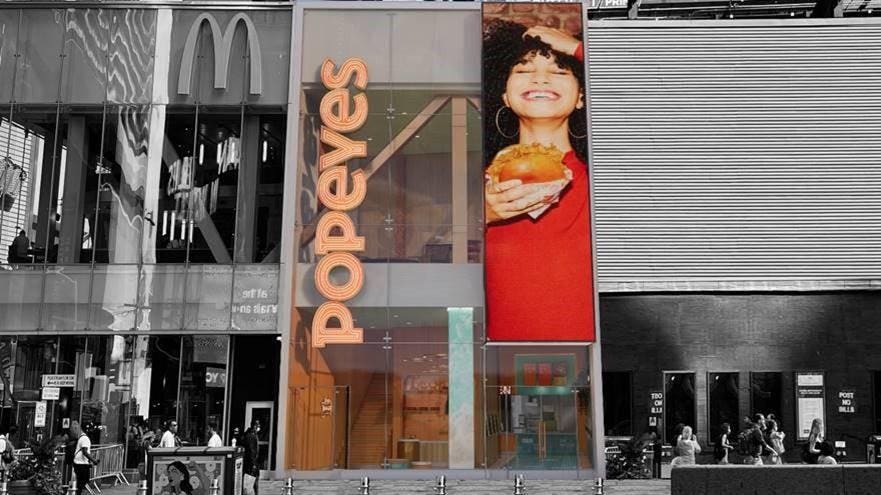 In the quick-service restaurant business, 34% year-over-year sales are stunningly anomalous, but that’s exactly what Popeyes generated in the quarter following its late-2019 chicken sandwich launch.

This type of momentum was bound to slow at some point. Parent company Restaurant Business International’s Q1 earnings report Tuesday suggests we may actually be past that point. Popeyes’ same-store sales declined 4.6% on the quarter, marking its fourth straight quarterly drop.

That’s not to say Popeyes doesn’t have a plan to gain back some of its momentum. The company is working on operational improvements, including the addition of double drive-thru lanes at over half of its North American locations to expedite throughput, for instance. It is also reconfiguring and launching new back-of-house technology solutions, rolling out new restaurant designs and growing its mobile order and pay, curbside pickup, digital order pickup shelves, self-order kiosks and Popeyes Rewards program.

This week, the chain also launched a new iteration of its signature sandwich–the Buffalo Ranch Chicken Sandwich is available nationwide for $4.99.

The offering supports an increased demand for the Buffalo ranch flavor profile which has made its way from a sauce to Hummus to seasoning. It also illustrates Popeyes’ desire to generate new news from a wildly successful platform and we shouldn’t expect Buffalo Ranch to be the last variation.

The chicken chain is also growing its footprint at an aggressive pace, including over 150 U.S. locations last year. A few weeks ago, Popeyes announced over 200 restaurants are set to open this year, including a new flagship location in New York City’s Times Square in June (which is sure to attract a lot of foot traffic).

The chain’s sandwich has created a sort of domino effect that has not only increased unit economics but also heightened such brand equity. As such, Popeyes is pressing the gas on its overseas expansion as well.

Among the markets Popeyes is targeting is China, where there is a clear demand for fried chicken as proven by rival KFC. Popeyes entered China in 2020, reporting its most successful debut for new market entry in its 48-year history and indexed against more than 3,400 restaurants in 25 countries. The long-term plan is to have 1,500 locations in China.

Further, Popeyes is targeting hundreds of restaurants across India, Bangladesh, Nepal and Bhutan, as chicken remains one of the largest and fastest growing categories in the region. The chain is also betting on the protein’s popularity in the UK, South Korea and Mexico, with plans to open “several hundreds” of restaurants across these markets “in the coming years.”

During Q1, Popeyes posted record unit growth and the highest number of Q1 net openings since RBI’s acquisition five years ago, but the company has made it clear this is just the beginning.

“Our existing international markets, notably Spain, Philippines, Turkey, Mexico and Brazil, grew significantly year-over-year, reinforcing our excitement around future growth as we expand our offerings to more guests around the world. We expect to continue to see this growth trajectory unfold as the year progresses, and are on track to deliver record net unit growth in 2022, including opening over 200 new locations in North America this year, while launching in new markets like Romania, and France,” Cil said.

Popeyes has every reason to be bullish, despite its recent negative results lapping anomalous quarters. The chain’s systemwide sales are now about north of $5.5 billion, versus $3.2 billion in 2016.

Of course, such growth indicates franchisees’ willingness (confidence) to invest more into the system and is typically supported by strong unit economics. For Popeyes, much of that strength can be traced back to its sandwich. According to QSR, average unit volumes are about $400,000 higher now than they were before the product’s launch.

Notably, this growth comes as Popeyes gears up to celebrate its 50th anniversary in June. Despite such longevity, however, it’s clear a lot of runway remains for the brand.