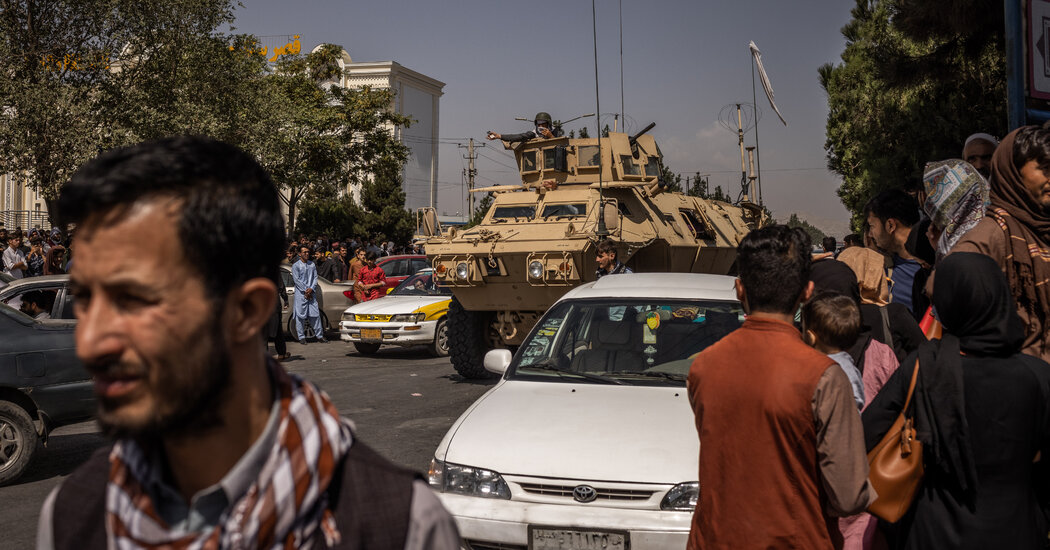 The Taliban may occupy Afghanistan’s border crossings and government offices, but what they control falls far short of a fully functioning country.

Services like water, electricity and trash pickup are faltering as state employees hide out at home. Ministries overseeing everything from diplomacy to public health have become little more than idle office buildings. The central bank sits effectively empty, with Washington having frozen Afghan government reserves held in U.S. bank accounts.

And the group faces a parallel threat: that Afghans, foreign governments and even interested security or intelligence services might not fully accept their rule, undermining their ability to consolidate power.

But to the Taliban, these problems all share at least one possible solution: making nice.

“Animosities have come to an end and we would like to live peacefully, without internal or external enemies,” Zabihullah Mujahid, the Taliban’s chief spokesman, told a gathering of reporters on Tuesday.

The group would respect women’s rights, media freedoms and the sanctity of foreign embassies, he promised. It would grant amnesty to Afghans who worked with the American-backed government. It would not shelter international terrorists, as it had during its prior stint in power, from 1996 to 2001.

The public relations push marks a new chapter in the Taliban’s struggle, one nearly as high-stakes as any on the battlefield.

They need to persuade foreign powers to send aid and lift sanctions if they are to reconstitute the bare essentials of a government, much less begin to rebuild a country devastated by 42 years of war.

The group could also use foreign recognition to shore up its legitimacy at home, coaxing civil servants and everyday citizens to accept its rule. And, as the Taliban learned in 2001 when an American-led invasion expelled them from power, their reputation as a global pariah can be a grave liability.

The result is head-spinning scenes like Mr. Mujahid’s press event, with hardened fighters toiling to appease the very foreign powers they dedicated their lives to expelling, and trying to smooth over the hard-line ideology that animates their movement.

It is also a strategy pursued by almost every modern rebel group to take power.

This can take decades. The Communist rebels who overtook mainland China in 1949 did not win United Nations recognition until 1971. Washington followed only in 1979 as part of a Cold War realignment years in the making. Both were victories nearly as hard-won as the civil war that brought them to power.

But recognition now comes primarily through demonstrating respect for political and human rights, as well as serving the great powers’ security interests.

When Ugandan rebels accused of chilling human rights abuses occupied the capital in 1986, they quickly promised moderation, including amnesty for those who had supported the old order.

Their actual record fell short of their democratic promises. But they averted the world’s worst fears by a wide enough margin to win diplomatic recognition and foreign aid, cementing their hold on power. The rebel government was even seen as a model of reform for a few years in the 1990s, though it is now widely considered a dictatorship.

In 1994, ethnic Tutsi militias took control of Rwanda amid a genocide of their fellow Tutsis. Despite expectations of retaliatory killings, the rebels formed a pan-ethnic unity government and implemented a reconciliation process that is still considered a global model.

Rwanda’s celebrated post-genocide democracy eventually hardened into authoritarianism. But it remains reliant enough on foreign support to uphold at least some of its early promises, including responsiveness to Western demands.

Still, not all promises are upheld. And the Taliban have been here before: On first taking power in 1996, the group sought global acceptance by pledging moderation at home and conciliation abroad.

But the Taliban’s efforts toward those goals were halting at best, hampered by inexperience, internal divisions and ideological fervor. The group harbored Al Qaeda and imposed brutal restrictions on women and minorities, angering foreign powers.

In 1997, it sent emissaries to New York to request a seat at the United Nations. But the delegation solicited the U.N. secretary-general, not realizing that recognition comes through a vote of the body’s member states. Only Pakistan, the United Arab Emirates and Saudi Arabia ever recognized Taliban rule as legitimate.

Regardless of whether today’s Taliban leaders have moderated ideologically, their grasp of diplomatic matters and concern with global standing appears to have deepened substantially.

“The quest for diplomatic and political recognition has been a constant in the Taliban’s struggle” to regain power, Barnett R. Rubin, an Afghanistan scholar, wrote this spring.

The group’s negotiators have repeatedly emphasized a desire for normal relations with Washington and other foreign powers, describing it as a priority. They appear to now better understand those countries’ demands and, as at Mr. Mujahid’s press event, how to at least pay lip service to them.

Analysts stress that, if the Taliban’s promises are real, it is almost certainly out of pragmatic self-interest, with any ideological shift a secondary factor.

If this is the case, then foreign governments can expect the Taliban to keep their word as long as the outside world makes it worth their while, but no longer.

Yearslong insurgencies tend to give rise to hard-liners, but also, the civil war scholar Terrence Lyons has written, to internal discipline. In a study of rebel governments, Dr. Lyons found that they were naturally inclined to authoritarianism but able to deliver a degree of democracy when they perceived it as within their interests.

Fears that the Taliban will go back on their word, perhaps as soon as the Americans complete their withdrawal, are widespread in Afghanistan. After promising moderation in 1996, the group converted Kabul’s central soccer stadium into an arena for public executions and amputations.

Bait-and-switches are not unheard-of, especially when aimed at domestic audiences with less power to hold the leaders to account. After seizing power in China, Mao Zedong invited intellectuals, students and others to publicly critique his new government. But he later jailed or killed, in huge numbers, those who had taken up his offer.

Still, rebel governments in small, aid-dependent countries like Uganda and Rwanda have proven careful not to cross their foreign patrons.

Though both have backslid on matters of democracy and human rights, this came as Western powers de-emphasized both issues, instead prioritizing counterterrorism and other aims.

The Taliban have shown hints of understanding this calculus, highlighting their battles against the small Islamic State affiliate in the country.

During the past years of peace talks, the group seemed to have internalized a hard lesson, Dr. Rubin, the Afghanistan scholar, concluded. However resoundingly the Taliban prevail on the battlefield, they will always be the weaker party in matters of global diplomacy, playing on the Americans’ terms.

The insurgents now oversee one of the world’s poorest and most isolated states. Whether they see upholding their promises as within their interests likely hinges not only on their beliefs and personal sincerity, but on the incentives that the outside world creates for them.