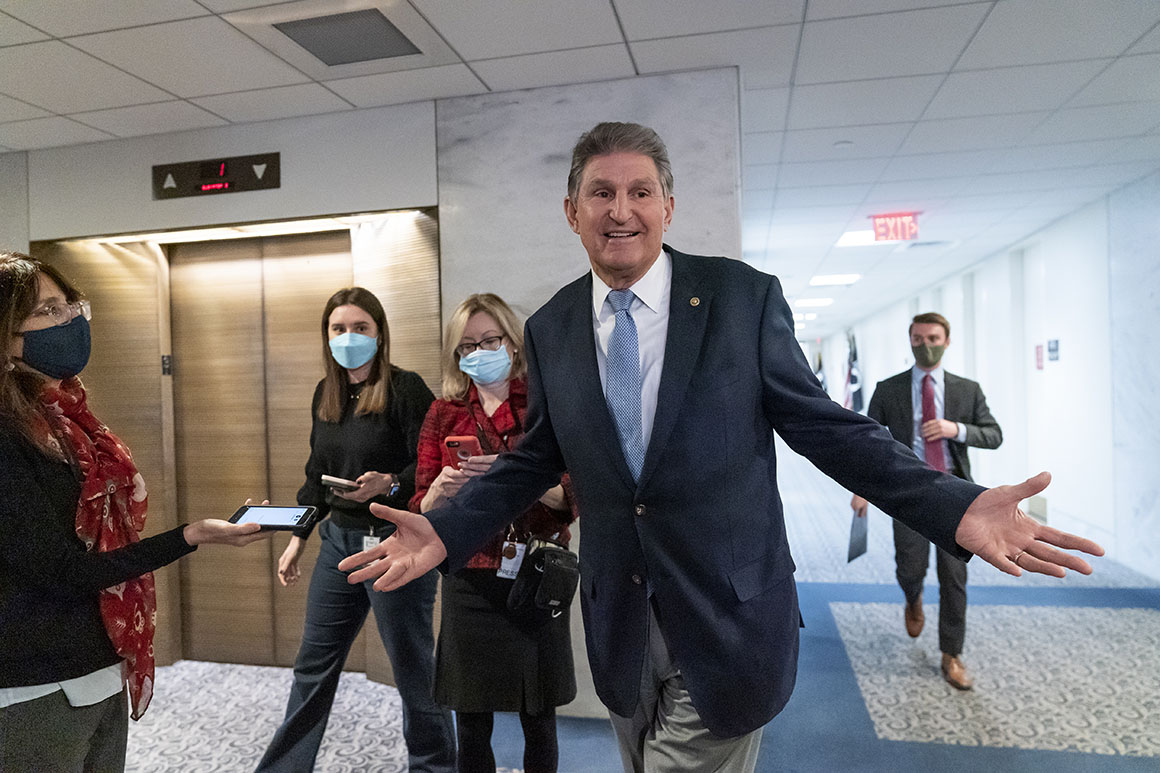 Sen. Raphael Warnock (D-Ga.) said he spent the weekend talking to Manchin and other Democrats about prioritizing legislation on ballot access, which he called a “moral question” that his party needs to confront.

Demonstrating that balancing act going on in the caucus, with President Joe Biden’s economic agenda on the line, Democrats devoted their Tuesday party meeting to their elections bill and rules changes likely needed for it to pass.

Those internal disputes are heightening the urgency among Democrats to decide between which of the party’s two biggest remaining goals they should consider first. Manchin’s central role in each piece of legislation “makes them interrelated,” said Senate Majority Whip Dick Durbin (D-Ill.).

“The dynamics are interwoven,” said Sen. Elizabeth Warren (D-Mass.), who is urging Democrats to finish both the elections and voting reform bill and the social spending bill in December. “There’s no policy reason they have to be linked, but they do come down to the same person.”

Manchin is not yet committed to the $1.7 trillion climate and social safety net legislation, nor does he support changing the Senate rules to push through an elections bill on a simple majority. He spoke with Biden Monday about the domestic spending bill and met with a trio of Democrats Tuesday to discuss voting rights and the rules changes needed to pass it, signs that the West Virginia Democrat is still open to casting his critical vote for both measures.

Manchin is expected to speak to Biden again soon and also discussed voting rights legislation in Tuesday’s full caucus meeting, according to attendees.

The current moment is a gut check for a Democratic Party that’s followed through on several major accomplishments during Biden’s presidency but also set expectations sky-high. The majority party passed $1.9 trillion in coronavirus aid, worked with Republicans on a $550 billion infrastructure law and united all 50 Senate Democrats around a sweeping elections bill.

But that legislation can’t pass under current Senate rules due to Republican opposition, and Democrats had to cut Biden’s sweeping spending plan in half from where it started — yet it still remains in limbo.

Schumer wants to address voting rights before the end of the year and is pushing Democrats to vote on the social spending bill by Christmas. But the parliamentarian is still reviewing key elements of the House-passed proposal and could reject provisions that don’t comply with Senate rules. Plus, Democrats still need to reach an agreement on state and local tax relief and potentially make more changes to bring Manchin on board.

Democrats are using the so-called budget reconciliation process to pass the social spending bill, which allows them to sidestep a filibuster and pass the legislation along party lines within strict constraints.

One Democratic senator, speaking candidly on condition of anonymity, said that the best-case scenario would be starting floor debate next week: “It’s possible you could get it done by the 23rd. But that assumes everything goes smoothly.”

On Tuesday afternoon, Schumer declined to guarantee a vote this month — after repeatedly saying he hoped to see one by Christmas — or even to say whether he believed Manchin wants to vote for the spending bill. The Democratic leader referred only to ongoing talks with Biden and the work the party’s doing behind the scenes to ready the bill for potential floor action.

Both the elections and the social spending bill can’t stay on pause for long without consequences. Many Democrats are pushing for the safety net legislation to pass before Democrats’ boosted child tax credit expires at the end of the year.

And some Democrats argue that a ballot-access bill needs to pass before states finalize their maps for the 2022 election cycle. For these Democrats, including the up-for-reelection Warnock, discussions on weakening the filibuster to pass an elections bill need to get jumpstarted to set up action for early next year.

“We want both of them, but voting rights has more of a time issue because there are states already developing their district mapping,” said Sen. Bernie Sanders (I-Vt.). “If we don’t move quickly it could be too late.”

Sen. Martin Heinrich (D-N.M.) contended the social spending bill must wrap up before Christmas, describing that as “just meeting some minimum level of expectation” for the party. He added that “voting rights is something we’re going to continue to put front and center until we get people’s right to vote protected again.”

Since Schumer can’t afford to lose a single Democratic vote in a 50-50 Senate, Manchin is shaping both pieces of legislation. On the social spending bill, Manchin so far has brought down the total price tag to around $1.7 trillion, from $3.5 trillion. And over the summer, Manchin worked with Schumer and a small group of Democratic colleagues to craft a new elections reform bill after the West Virginian opposed an original version that his party introduced.

Still, Democrats are already conceding they may leave for the holidays without passing either of their big-ticket items. Sen. Jon Tester (D-Mont.) said he doesn’t “necessarily think either of them have to be done in December,” adding that he’s “willing to stay here and work until we get them done.”

For Tester and other members, it’s not necessarily about passing the two items by a certain deadline, or in what order, but instead getting the entire caucus on board to actually pass the rest of Biden’s agenda after months of delay.