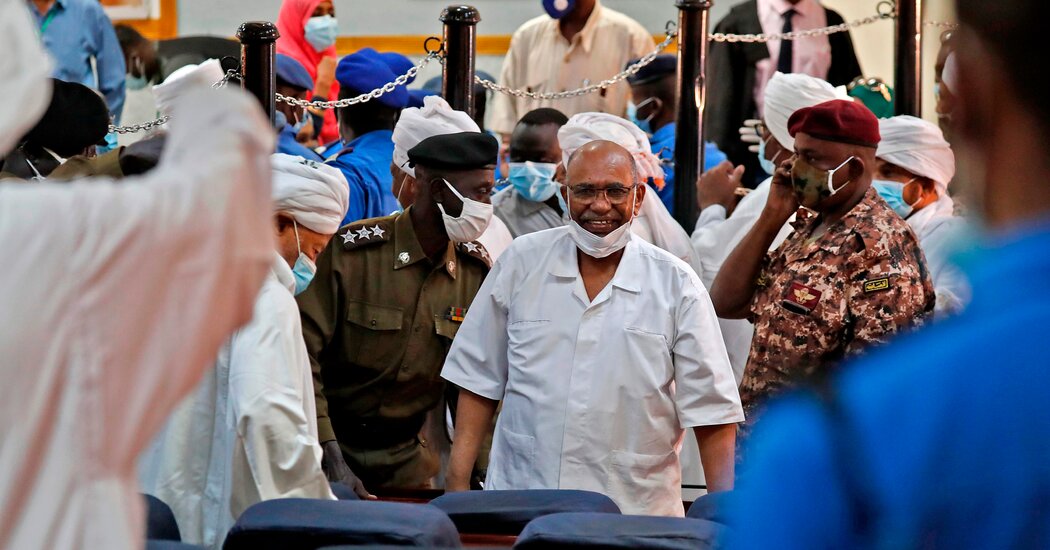 NAIROBI, Kenya — The chief prosecutor of the International Criminal Court, in his first visit to the capital of Sudan, said Thursday he was hopeful that the Sudanese government would turn over former President Omar Hassan al-Bashir to face charges of genocide and war crimes in the region of Darfur.

Mr. al-Bashir, 77, was ousted two years ago and has been imprisoned since then. He has been wanted by the international court in The Hague since 2009 over atrocities committed by his government in Darfur, where at least 300,000 people were killed and 2.7 million displaced in a war from 2003 to 2008, the United Nations estimates.

The court has been pressing Sudan’s transitional government, which took over after Mr. al-Bashir was deposed, to hand him over along with other leaders accused of crimes in Darfur.

It will not be an easy decision.

The transitional government is made up of both civilian and military leaders, and some of those military leaders, once allied with Mr. al-Bashir, were also implicated in the atrocities in Darfur, a western region. If he is extradited, he might give evidence that could expose them to prosecution.

But Karim Khan, the chief prosecutor of the International Criminal Court, struck a note of hope Thursday at a news conference in the capital, Khartoum.

“There is from my meeting today a lot of cause for optimism,” said Mr. Khan, adding: “This is a very critical moment for Sudan. We cannot march from the darkness into light without dealing with some of the issues and injustices of the past.”

If Mr. al-Bashir is turned over for trial, it will mark a major step in the nascent Sudanese government’s efforts to heed demands for justice, holding those responsible for the abuses to account and ending decades of impunity.

Mr. al-Bashir, an army commander, came to power in Sudan in 1989 after ousting the democratically elected government. For the next three decades, he ruled with an iron fist, overseeing a government that restricted media freedoms, curtailed human rights, crippled economic growth and waged war on its own people.

On Wednesday, Sudan’s foreign minister, Mariam al-Sadiq al-Mahdi, said the civilian cabinet had agreed to extradite Mr. al-Bashir after meeting with Mr. Khan, according to the state-owned Sudan News Agency.

The foreign minister’s announcement on Wednesday came days after the cabinet voted to ratify the Rome Statute, the founding treaty of the I.C.C. That inched the northeast African state closer to fully joining the court and increasing the likelihood that Mr. al-Bashir would face trial.

Mr. Khan said Thursday that the international court had also signed a memorandum of understanding with Sudan’s government to ease the exchange of information related to the cases against Mr. al-Bashir and other Sudanese that are pending in the court.

Mr. Khan said that he had not discussed a date for Mr. al-Bashir’s extradition, but that the country’s leadership would meet next week to take up the issue. He said they had welcomed his request to have a permanent team from the international court work in Khartoum.

While president, Mr. al-Bashir oversaw a vicious campaign in the western region of Darfur, where rebels took up arms after accusing his government of political and economic marginalization.

The enormous toll of death, displacement and human suffering led the International Criminal Court to issue an arrest warrant for him in 2009. The court accused him of being responsible for genocide, war crimes and crimes against humanity in Darfur, including murder, torture and rape, allegations that he has rejected over the years.

The Sudanese courts convicted Mr. al-Bashir of money laundering and corruption charges in late 2019 and sentenced him to two years in detention. He still faces charges related to the 1989 coup, and could be sentenced to death or life imprisonment if he is convicted.

On Wednesday, the United States State Department welcomed the news that Sudan’s foreign minister had signaled agreement by the cabinet to transfer Mr. al-Bashir. The State Department spokesman, Ned Price, urged all sides in the government to work together “to finalize and execute this decision.”

The international court does not try suspects until they are arrested and sent to The Hague, meaning the case against Mr. al-Bashir remains in the pretrial stage.

Last year, a member of the ruling council said Mr. al-Bashir might be extradited. Many Sudanese observers then doubted that would happen, given the enduring discord between the military and civilian arms of the government and how close some of the military leaders in the council were to Mr. al-Bashir.

But in recent days, some military leaders have signaled their readiness to cooperate with the court. These assurances have even come from Gen. Mohamed Hamdan, also known as Hemeti, the first vice-president of the transitional council. He was a close ally of Mr. al-Bashir’s and led a paramilitary force accused of committing widespread atrocities in Darfur.

Still, while some segments of the military may have agreed to cooperating with the international court, there may still be pockets of stiff resistance, said Jihad Mashamoun, a Sudanese researcher and political analyst based in the United Kingdom.

“Handing Mr. al-Bashir can open a lot of questions and expectations on the government to hand over high-ranking officials if something is proven against them during the court process,” Mr. Mashamoun said.

Chevrolet Performance To Bring Over 12 Cars To 2021 SEMA Show