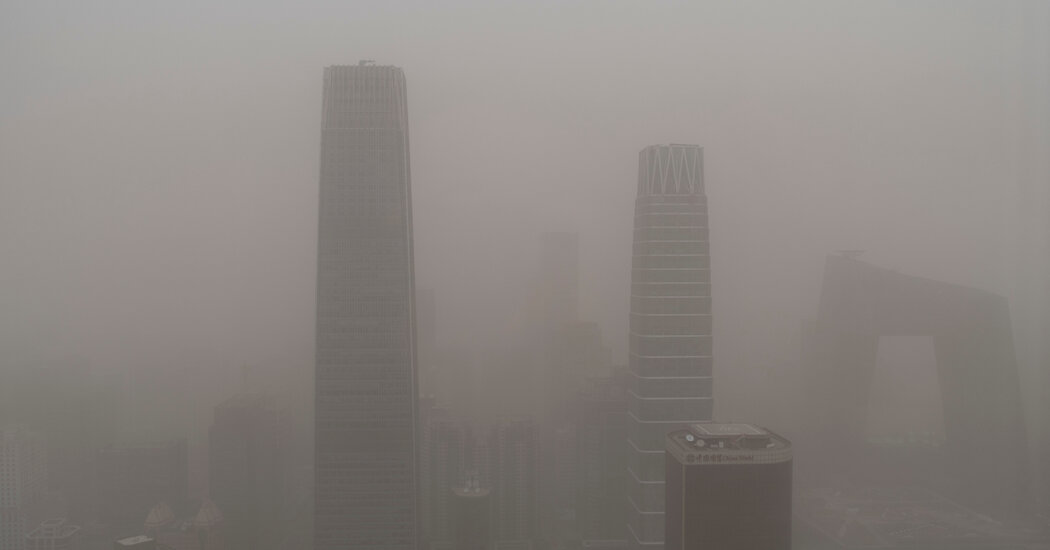 When China’s leader, Xi Jinping, met with Communist Party delegates from Inner Mongolia last week, he urged them not to relent in the fight to improve the environment.

“We must adhere to the concept that clear waters and green mountains are as good as mountains of gold and silver,” he said.

On Monday, large parts of China experienced just how bad the environment can still be.

The largest and strongest dust storm in a decade swept across northern China, grounding hundreds of flights, closing schools in some cities and casting a ghastly shroud over tens of millions of people — from Xinjiang in the far west across to the Bohai Sea, according to China’s meteorological service.

The storm, coming after weeks of smog, recalled the “airpocalypses” that the country routinely experienced a few years ago, forcing crash government efforts to address what had become a political and public health crisis.

Those efforts improved the air quality significantly, especially around the capital. But this week, three forces — the post-Covid industrial rebound, the continued impact of climate change on the deserts of northern China, and a late winter storm — combined to create a dangerous, suffocating pall.

In an interview, Mr. Li said Monday’s storm was “the result of land and ecological degradation in the north and west of Beijing.” He added that industrial pollutants around Beijing had so far this year exceeded the yearly average of the last four years.

The dust was churned up by a snowy squall that moved through Mongolia over the weekend. The storm there toppled electrical towers, knocking out power in several regions, and killed at least nine people.

The impact was felt across most of northern China. Measurements of the Air Quality Index — set by the United States Environmental Protection Agency — exceeded the hazardous level for particles associated with airborne sand and dust. Pollutants measured by the concentration of PM2.5, or particulate matter of a size deemed especially harmful, were also dangerously high.

In Beijing, the authorities ordered children, the elderly and the sick to remain indoors, and for everyone else to avoid unnecessary activity outside. The pollution, which turned the air yellow orange in the morning and a soupy gray by afternoon, was expected to last until Tuesday morning.

Many residents responded with dark humor.

One meme that spread online grafted an image of the iconic headquarters of China’s state television network with a still from “Blade Runner 2049,” the dystopian 2017 science fiction film. Another showed spacecraft and figures from “Ultraman,” a Japanese superhero franchise, marching through Beijing’s gloom.

Given the improvements in air quality in recent years, newcomers in Beijing experienced air like this for the first time.

“I couldn’t see the building across the street,” said Wang Wei, a 23-year-old college graduate who recently moved to Beijing from Henan, a province in central China. “I didn’t think the sky could be this yellow.”

The environment remains a politically sensitive issue for the Communist Party leadership. Mr. Xi has repeatedly called for a “green revolution” in China’s economy, and last year he pledged that China would accelerate its efforts to reduce carbon emissions, which have contributed to climate change.

Pollution has proved to be a pernicious challenge, though, as officials continue to prioritize economic development.

Recently concluded legislative meetings took place during several days of heavy pollution that has been attributed to rising steel and cement production. Many environmental groups were disappointed that the new five-year development plan adopted at those meetings in Beijing did not include more specific government proposals on tackling climate change.

Even so, Mr. Xi’s exhortations appear at times to scramble officials into action. Last week, the Ministry of Ecology and Environment warned the authorities in Tangshan, the country’s steel-making hub in Hebei Province, after finding that four steel mills had failed to reduce production to lower pollution.

In Inner Mongolia, a northern Chinese region whose delegates Mr. Xi met in Beijing, the local edition of The People’s Daily featured an article about efforts to combat desertification, which has contributed to the dust storms. The article appeared on Monday just as the worst pollution in years hit.

“Yellow sands are going away and green trees are flourishing,” it proclaimed. 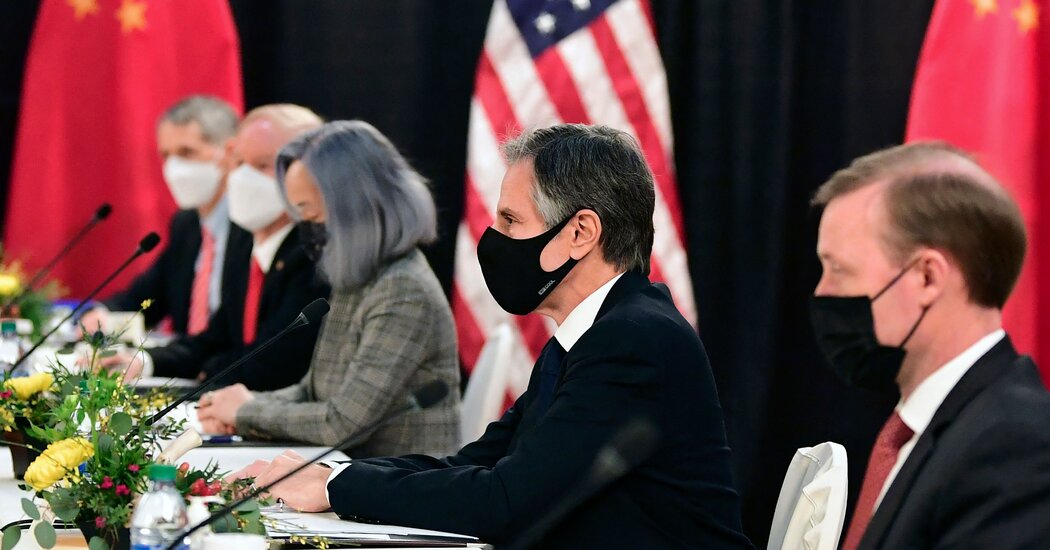 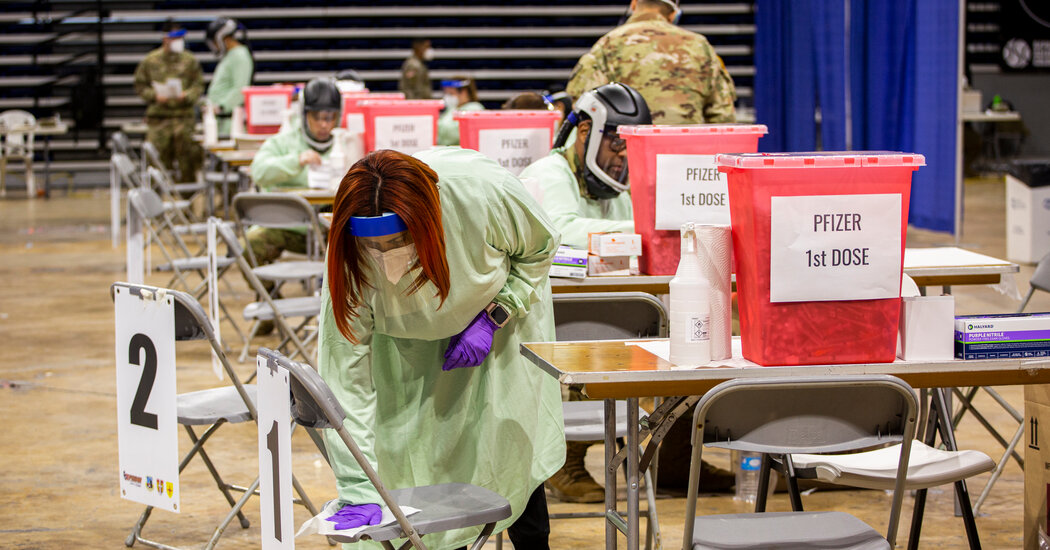 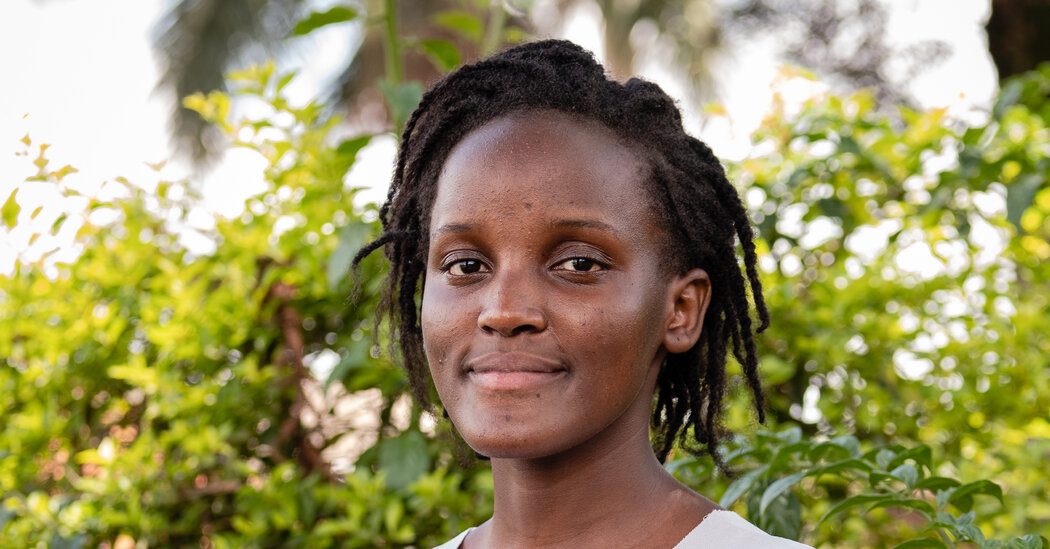