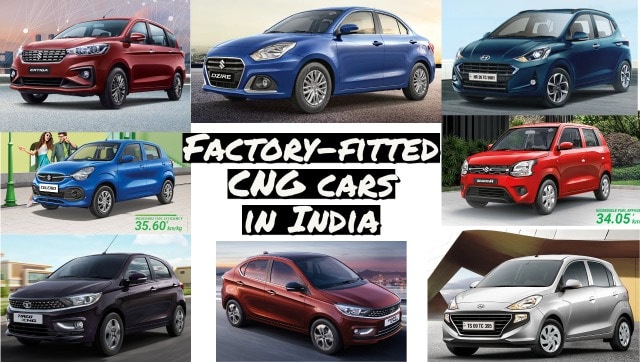 We’ve compiled a list of the most economical CNG cars in India, and yes, all of them are Maruti Suzuki cars. There are a total of 12 factory-fitted CNG cars in India.

There are a total of 12 factory-fitted CNG cars sold in the country, all of which fall under the Rs 10 lakh (ex-showroom) category. The prices range between Rs 4.95 lakh for the Maruti Suzuki Alto 800 and go up to Rs 9.87 lakh (ex-showroom) for the Ertiga. There are also a few commercial vehicles, which aren’t available for the public to purchase. However, since the idea of CNG cars, surely, is to have a fuel-efficient and clean way of motoring. So, we’ve compiled a list of the most economical CNG cars in India, and yes, all of them are Maruti Suzuki cars. However, we’ve also added some honourable mentions towards the end of the article, along with all the other factory-fitted CNG cars sold currently.

The Celerio S-CNG is the most fuel-efficient of the lot, with a mileage of 35.6 km/kg (kilometre per kilogram), which is mighty impressive. Maruti Suzuki is said to have improved its S-CNG cars, which in total add up to seven models. It’s powered by a 1.0-litre, three-cylinder, K-Series engine which produces 59PS of peak power and comes mated to a five-speed manual transmission.

The Wagon R comes in second with 34.05 km/kg, and is a lot more spacious than the Celerio, in that respect. It, too, is powered by the same 1.0-litre, three-cylinder, K-Series engine which produces 59PS of peak power and comes mated to a five-speed manual transmission. It’s priced from Rs 6.34 lakh (ex-showroom).

The ubiquitous Alto 800 is next on the list with a mileage of 32.99 km/kg, which does make it rather pointless since there is a much more spacious and modern sibling out there with better fuel economy. It must be said though, that the Alto is in desperate need of a serious upgrade soon. It’s powered by an 800cc, three-cylinder petrol engine with 39PS of peak power.

The boxy-yet spacious S-Presso follows the Alto with a fuel efficiency figure of 31.2 km/kg, which is impressive but puts the S-Presso in a similar predicament to the Alto 800. If one can go ahead and buy a Wagon R, then would the S-Presso stand a chance? Yes, price is a factor but so is space and size.

Then there’s the freshly launched Maruti Suzuki Dzire, which is priced from Rs 8.14 lakh (ex-showroom) and boasts a fuel economy figure of 31.12 km/kg. It’s powered by a slightly peppier 1.2-lite, four-cylinder petrol engine which produces 77PS of peak power.

Although they aren’t the most fuel-efficient CNG cars sold in India, a special mention must go out to the Tata Tiago iCNG and Tata Tigor iCNG, as well. They are immensely safer than some of the CNG cars mentioned on this list, and that has to count for something. Other CNG cars on the market include the Hyundai Santro, Hyundai i10 Nios, Hyundai Aura, Maruti Suzuki Eeco and the Maruti Suzuki Ertiga. However, one overbearing fact is that no factory-fitted CNG car in India comes with an automatic gearbox.