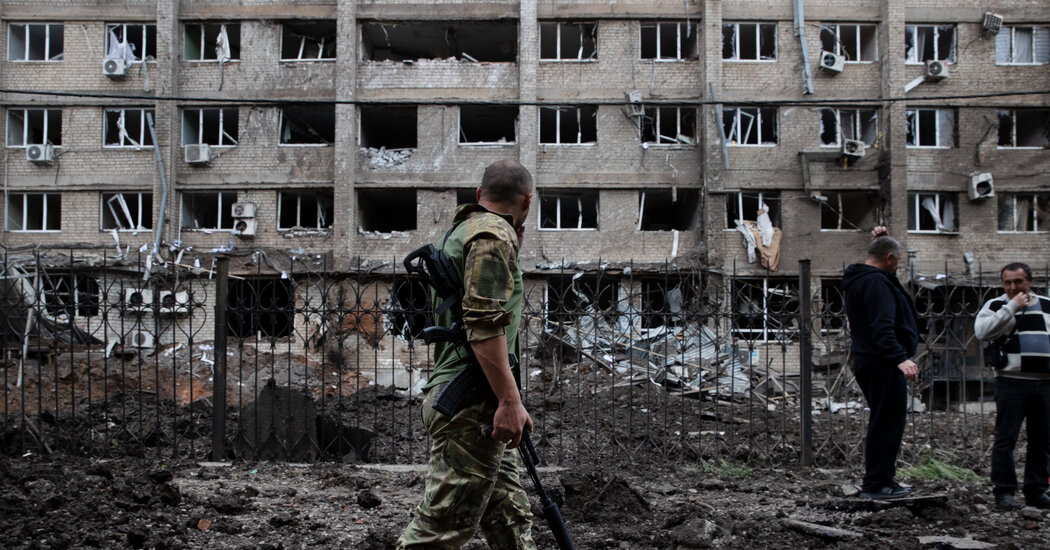 BAKHMUT, Ukraine — In battlefields in the rolling hills of the Donbas in eastern Ukraine, and near the Black Sea in the south, Ukrainian troops have stubbornly tried to inch forward without losing control of territory, facing an opponent whose forces have been bolstered by inmates-turned-fighters and by Iranian drones.

“Perhaps it seems to someone now that after a series of victories we have a certain lull,” President Volodymyr Zelensky of Ukraine said in his nightly address Sunday. “But this is not a lull. This is preparation for the next sequence.”

Over the weekend, Ukraine’s Army built up the pressure in the country’s south, with forces striking Russian military strongholds and targeting sites used by local officials loyal to the Kremlin. They are also continuing to hit the supply lines for thousands of Russian soldiers on the western bank of the Dnipro River. Ukraine’s strikes in the important Russian-held city of Kherson seemed to rattle security there, with firefights and broad disorder reported.

But farther north and to the east, in the city of Bakhmut in the Donbas region, advancing Russian forces made their presence known as the sound of artillery rang out on Sunday, highlighting an important location where Ukrainian control may become tenuous as Russian forces press from the east and southeast in an attempt to cut off the country’s supplies.

Bakhmut, a city with a prewar population of 70,000, is critical to Russia’s objective of taking the rest of the mineral-rich Donbas region. When Russian forces captured the industrial city of Lysychansk in early July and cemented their control of Luhansk, one of two provinces in the Donbas, Bakhmut soon became the focus of Russia’s slow advance.

Even after Russia took a crippling defeat in Ukraine’s northeast last week, where its troops lost dozens of villages and roughly 1,000 square miles of territory around the city of Kharkiv, its forces still continued to attack Bakhmut.

There seems an unending supply of soldiers around Bakhmut attacking Ukrainian forces, many of them not among the regular Russian ranks, Ukrainian troops said.

Soldiers on the front line around the city have claimed that Russian forces in the area are mainly composed of troops from the Wagner Group, a private military company with ties to the Kremlin. Wagner troops have fought in places such as Syria and Libya — countries with a history of Russian intervention — and Ukrainian soldiers say they are deploying Russian prisoners onto the front lines.

On Tuesday, a video posted online and analyzed by The New York Times showed the Wagner Group promising convicts that they would be released from prison in return for a six-month combat tour in Ukraine. It is unclear when the video was filmed.

After Russia’s humiliating defeat around Ukraine’s capital, Kyiv, in the spring, President Vladimir V. Putin said that capturing the Donbas, a region roughly the size of New Hampshire, would be one of the war’s primary aims.

At a regional summit in Uzbekistan on Friday, Mr. Putin reiterated that the “main goal” of his “special military operation” was to seize the Donbas, despite losses in the northeast and Ukraine’s ongoing offensive in the south, near the port city of Kherson.

A Ukrainian missile strike there leveled a cotton mill that was used as a Russian base, Ukrainian officials said Sunday, after taking credit for an attack on a courthouse downtown that served as a headquarters for the Kremlin-backed military administration.

Another challenge to Russia’s claim that it has full control of the security situation in the city came late Saturday, when a firefight broke out in the streets of the city and continued overnight, according to video released by Russian military bloggers. Kherson remains the only regional capital in Ukraine captured by Moscow since the invasion.

It was unclear who was involved in the fighting. The local Russian authorities spoke of a raid targeting Ukrainian guerrilla fighters. The Ukrainian military had no official statement, but officials suggested it was possibly factional fighting among those on Moscow’s side.

Mykhailo Podolyak, a top adviser to the Ukrainian president, said that the firefight was part of an internal struggle between Russians looking to “divide the loot” before they “flee.”

Ukraine has been pushing a counteroffensive in the south for weeks, trying to wear down Russian fighters and force their surrender or retreat. But unlike in the northeast, where the Russian lines were thinly spread and quickly overwhelmed by Ukraine’s lightning assault, Russian forces in the south have been preparing for an expected Ukrainian advance and have fortified their positions.

Despite the increasing pressure, there was no indication of any mass Russian withdrawal, and Russian forces have continued to assault Ukrainian positions and pound Ukrainian towns and villages.

The city of Kherson and the surrounding region are the only land held by Russia west of the Dnipro River. Ukraine has been blowing up Russian ammunition dumps and command posts and hitting river crossings and supply lines with missile strikes, seeking to isolate the estimated 25,000 Russians on the Dnipro’s west bank.

Russia and Iran never acknowledged striking a deal for the Shahed-136 attack drones, but a senior Ukrainian military official said remnants of them were discovered on the ground after the northeastern counteroffensive was launched earlier this month.

The powerful weapon is a so-called kamikaze drone because it explodes on impact, carrying a warhead of about 80 pounds. Its appearance in Ukraine marks the first time it has been deployed outside the Middle East.

The use of these drones illustrates how, despite Russia’s broad isolation and even some recent admonitions by Chinese and Indian leaders, Moscow has still found support from Iran. It also adds a layer of geopolitical complexity to the conflict as more nations are drawn into providing weaponry.

The United States believes Iran has sold Russia two types of drones, Adrienne Watson, spokeswoman for the National Security Council, said. Russian transport aircraft loaded the drones at an airfield in Iran in August, she said.

“The Russian military is suffering from major supply shortages in Ukraine, in part because of sanctions and export controls, forcing Russia to rely on unreliable countries like Iran for supplies and equipment,” Ms. Watson said. She said U.S. intelligence showed drones from that batch had experienced “numerous failures.”

Yet on the field, the drones are rattling Ukrainians.

In its first use in Ukraine, an Iranian drone blew up an American-supplied M777 howitzer, Col. Rodion Kulagin, the commander of artillery operations in the Kharkiv counteroffensive, said in an interview. Half a dozen strikes destroyed howitzers and armored vehicles, killing four soldiers and wounding 16, he said. Russia’s use of Iranian drones was reported earlier by The Wall Street Journal.

The appearance of the drones — even amid Ukrainian successes in the northeast — prompted Colonel Kulagin to appeal to Ukraine’s Western allies to quickly provide defenses or a similar weapon to strike back.

Drones have played a crucial role in the conflict already. The United States has supplied Ukraine with its Switchblade drones, and an attack on Russia’s Black Sea Fleet headquarters involved a drone. Ukraine has also deployed Turkish-made Bayraktar TB2 drones firing guided missiles.

It is unclear how many Iranian attack drones Russia has acquired. The U.S. national security adviser, Jake Sullivan, said in July that Russia intended to buy several hundred Iranian drones of various types.

The Shahed-136 drones have so far been deployed only in northeastern Ukraine, Colonel Kulagin said. “They are testing them and have concentrated them in this region,” he said.

Capt. Volodymyr Danchenko, an artillery officer whom the Ukrainian military made available for a telephone interview, said he had witnessed a strike on a self-propelled howitzer. The drone streaked in and obliterated the weapon, he said.

“It was not like artillery that hit us before,” he said. “I haven’t met something like this before.” 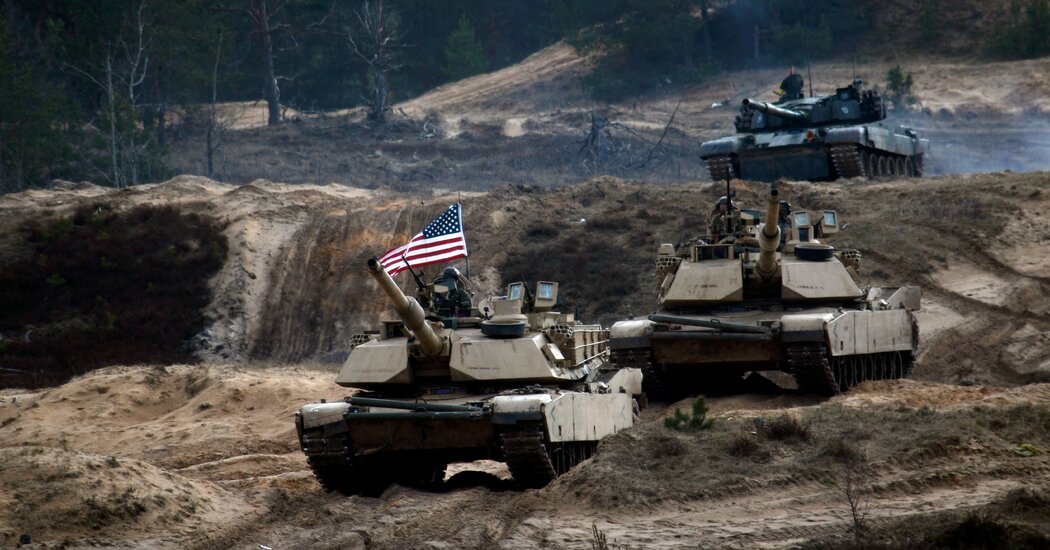 Western Tanks Are Coming to Ukraine, but Will They Be Enough? 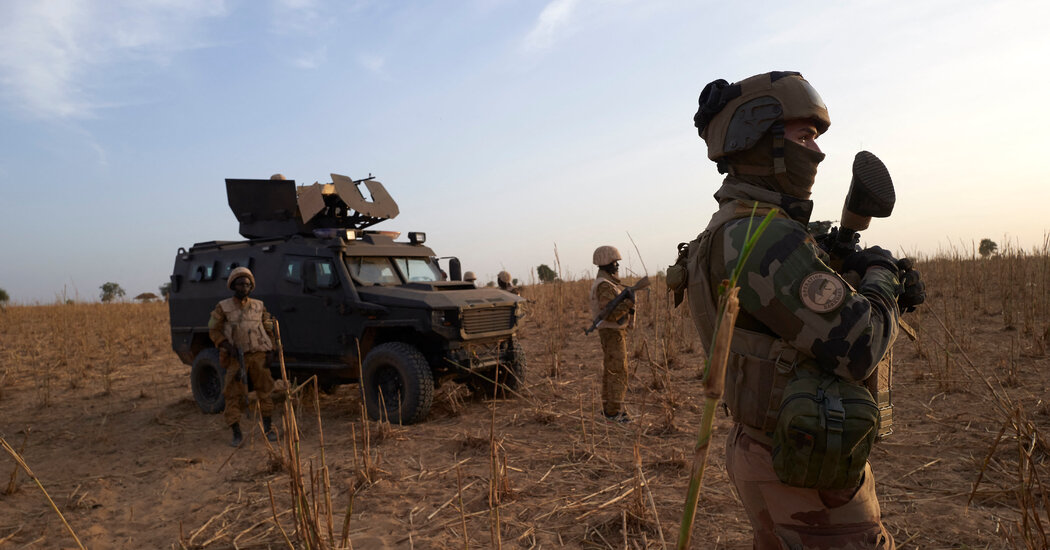 France to Pull Troops Out of Burkina Faso, as its Unpopularity in Africa Grows 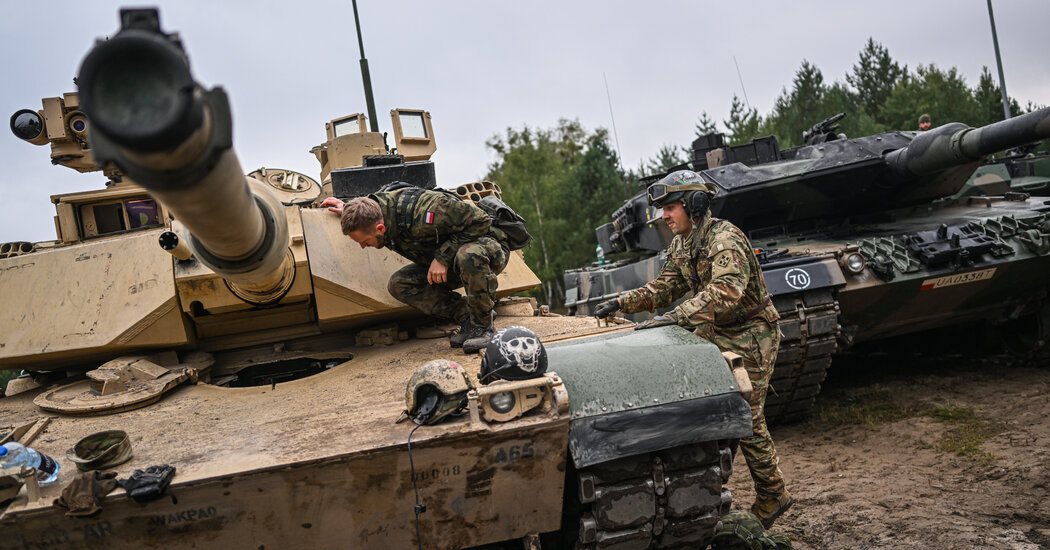 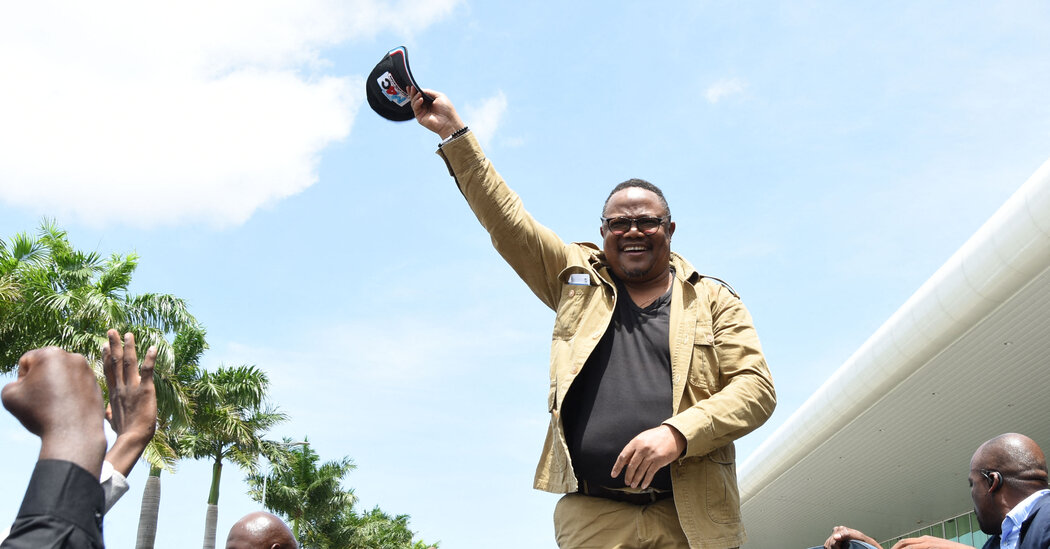