The most extreme heat wave ever recorded in the Pacific Northwest continues to shatter records for another day. Nearly 20 million people are currently under excessive heat warnings — many of them sweltering through triple-digit temperatures without air conditioning in a region that usually enjoys mild summers.

Behind the misery is a weather phenomenon known as a heat dome.

What is a heat dome?

A heat dome is a essentially a mountain of warm air built into a very wavy jet stream, with extreme undulations. When the jet stream — a band of strong wind in the upper levels of the atmosphere — becomes very wavy and elongated, pressure systems can pinch off and become stalled or stuck in places they typically would not be.

In this case, a ridge of high pressure, which is the heat dome, has become lodged in the Pacific Northwest. It is acting as a block in the atmosphere, not allowing the weather to move. The specific type of block is called an Omega block, because it looks like the greek letter Omega, and the hot air is pooling inside. 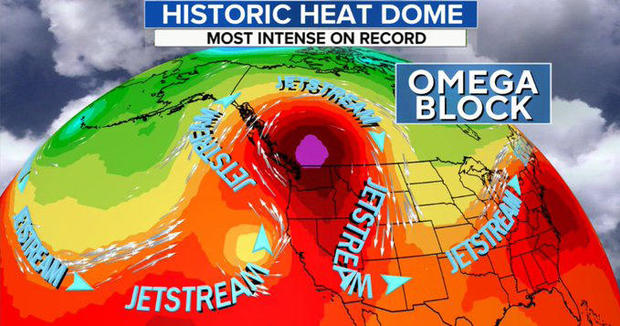 Why are these temperatures so extreme?

Areas of high pressure, like heat domes, have sinking air. This compresses the air on the ground and through compression it heats the air column. In addition, winds are moving downslope from the mountains downward into cities like Seattle and Portland; that downward motion causes heating as well.

These local effects combined with the background warming of climate change, which has warmed the Pacific Northwest by about 3 to 4 degrees Fahrenheit since pre-industrial times, adds intensity to an already strong heat wave.

What areas are currently affected?

Portland broke its all-time record Saturday, hitting 108 degrees, and then blew past it again Sunday with a 112-degree reading. Monday’s high in the area is forecast to reach an astonishing 115.

Seattle also set a new all-time record of 104 on Sunday and is expected to beat it handily with a forecast high of 111 Monday. That would beat the old daily record by 21 degrees.

WATCH: @WeatherProf has more on the extreme heat in the Pacific Northwest and how climate change is contributing to the record breaking temperatures. pic.twitter.com/Lupr6CLP0L

How long will it last?

The heat will ease near coastal regions and in Seattle and Portland on Tuesday as temperatures drop back into the 90s. But the record-breaking heat will last all week in the interior portions of the Pacific Northwest.

How unusual is this heat wave?

“Unprecedented” does not do it justice. Statistically speaking, this would be a once-in-a-1,000-year occurrence in a normal climate. But our climate is no longer normal: it is being heated by human-caused climate change. So these once nearly impossible heat waves will become not only possible, but more probable, in the coming years and decades.

Is this connected to climate change?

There are two climate connections. The first is obvious: The atmosphere is simply warmer than it was 100 year ago and so heat waves are warmer than they used to be. But as you increase the average temperature by a few degrees, your extremes, like heat waves, become more extreme at a greater pace.