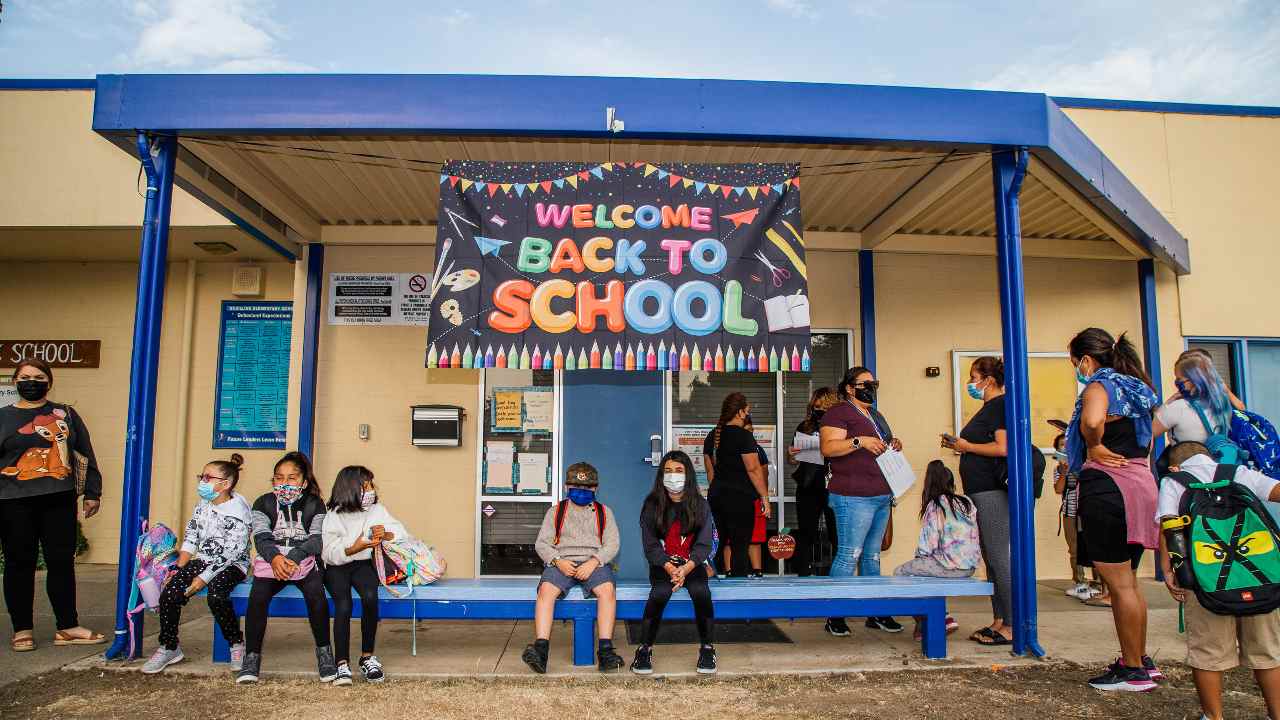 Bill Hanage, an epidemiologist said, “The nature of delta transmission means that the cases are going to go up in a lot of places at around the same time.’

The United States has entered the fourth wave of the pandemic — or fifth, depending on which expert you ask. As the vaccination campaign lags and the contagious delta variant spreads, cases and hospitalizations are at their highest since last winter. COVID-19

deaths, too, are on a steady incline.

After every other peak has come a trough, however, often for reasons that were not immediately obvious. In Britain, where the variant is also the dominant form of the coronavirus

, daily cases fell from a peak of 60,000 in mid-July to half that within two weeks, though they have since been climbing again.

In India, the numbers spiked to more than 400,000 daily cases this spring; experts estimated that the true figure could be more than 20 times greater. The unimaginable toll shocked many who had declared that the country had successfully eluded the virus. But then, in June, infections fell drastically.

Scientists are struggling to understand why delta outbreaks in those countries dissipated, even if temporarily, and what that may mean for similar surges, including the one in the US.

In the US, the variant’s pace has slowed, and new infections are falling in some states, like Missouri, that delta struck hard. The number of infections over the last week is now 14 percent higher than it was two weeks ago, a fraction of the rate during much of July and early August.

Is the delta surge beginning to slow in the US? Or is the variant putting the country on course for months of bumps and valleys?

Expert opinion varies widely on the direction of the virus in the coming months. A number of national forecasts being tracked by the Centers for Disease Control and Prevention predict that cases will rise in the early weeks of September — but many foresee the opposite.

“Whatever downturn we have, I think, will be fairly mild,” said Dr Celine Gounder, an epidemiologist and infectious disease specialist at Bellevue Hospital Center in New York. “We’re right at that tipping point where back-to-school will tip us back into growth at some point.”

Gounder predicted that cases in the US would climb again in September before subsiding in October. The virus may have burned through unvaccinated segments of the population this summer, Gounder said, but other people remained vulnerable.

“I don’t think that means that everybody who was susceptible has been infected,” she said. “I think people tend to have a false sense of security about that.”

As schoolchildren and some office workers begin mixing in greater numbers this fall, for example, resurgences may appear, she said.

Other epidemiologists said that they were encouraged by trends in Southern states where schools had already opened, noting that while infections were growing among children, they were also falling off among adults.

It is important “not to overly extrapolate” from delta’s course through Britain and India, Gounder added. The three countries vary greatly in the percentage of population vaccinated, the ages of the vaccinated, the embrace of large gatherings and open schools, and the prevalence of mask-wearing and other precautions.

Even the weather may be playing a role. Britain’s infections thinned in the summer, while the US is heading into fall with a huge burden of cases. More people gathering indoors will mean more opportunities for the virus to spread.

Delta’s path across the US has depended heavily upon vaccination rates, social behaviours, the weather and various levels of precautions, epidemiologists said. Week on week, cases are now falling in a number of Southeastern states and California, but rising across much of the Midwest and Northeast.

because the infected carry it in substantially greater amounts in their airways.

This makes the variant particularly adept at exploiting opportunities for transmission — the crowded nightclub, the classroom with an unmasked teacher. But it also means that even modest restrictions, like masking and distancing, can bring numbers back down.

In the Netherlands, where 62 percent of the population is fully inoculated, cases went up by 500 percent after the country removed restrictions. That forced the government to reintroduce some measures, including closing nightclubs and limiting the hours for indoor dining, leading to a rapid decline in new cases.

By mid-June, three weeks into Britain’s delta surge, cases stopped climbing as quickly as they had been, said Paul Hunter, a professor of medicine at the University of East Anglia and an adviser to the World Health Organization on COVID-19

One major event changed all that: the European soccer championships, a monthlong series of matches featuring an unusually strong England team that filled pubs and living rooms beginning in mid-June. Cases soared among the young and unvaccinated, especially among men.

Britain is now nearing a point of what Hunter described as endemic equilibrium, where cases level off as more people develop immunity from vaccination or past infection, even as others see their levels of protection gradually fade.

Bill Hanage, an epidemiologist at the Harvard T.H. Chan School of Public Health, said, “Once the schools close, once the football is over, and after the regular contact networks reassert themselves, then delta has fewer places to go and it slumps.”

But Hunter cautioned that the point at which infections stabilize remained highly dependent on how and where people mixed, as well as the season.

After daily new cases in Britain halved from mid- to late July, they began climbing again. In recent weeks, Hunter said, the rise has been driven by outbreaks in regions that had seen relatively few cases earlier in the pandemic and, therefore, had less naturally acquired immunity, including southwest England and rural parts of Scotland and Northern Ireland.

The variant took a different course in largely unvaccinated India. In the months before the second wave, as cases dropped and hospitals emptied out, life had gone back to near normal in many parts of India.

In early March, the government declared that the country was in “the endgame of the pandemic,” and Prime Minister Narendra Modi sanctioned crowded election rallies in several states, as well as the Kumbh Mela festival, which attracted millions of devotees. Weddings, cricket matches and family gatherings were in full swing.

In the weeks that followed, millions of people fell sick and thousands died. Hospitals in several major cities were overwhelmed as oxygen and other critical supplies ran out. But the cases dropped nearly as rapidly as they began, especially in the worst hit states.

Although the official tally of cases in India is likely to be an underestimate, the plunge cannot be attributed to a decrease in testing, said Bhramar Mukherjee, a biostatistician at the University of Michigan.

“We always predicted the second wave to be tall and skinny,” Mukherjee said. “If you rise that fast, the decline is also steep as you burn through the susceptible population quickly.”

Antibody testing suggested that the proportion of Indians who had been infected rose to 67 percent in July from 21.5 percent in January. Antibody tests can be unreliable, but if those numbers are close to accurate, natural immunity may help the country stave off another horrific wave.

India may need to rely on natural immunity, because only nine percent of its population is fully vaccinated, compared with just over 50 percent in the US. For the moment, cases in India have plateaued at significantly higher levels than seen earlier in the pandemic.

Britain rolled out vaccines by age, and 90 percent of adults have received at least one shot. The strategy yielded benefits, limiting hospitalizations even as cases swelled. In the US, the distribution of vaccines is patchier — and delta’s rise and fall will be, too, Hanage said.

“The nature of delta transmission means that the cases are going to go up in a lot of places at around the same time, but the consequences will be much, much worse in terms of absolute numbers in places with less vaccination,” he said.

Hanage warned that reopening schools and offices in the US would add to cases. About 10 million adolescents in the country are immunized, which may blunt the impact of school reopenings in particular, and more children may be vaccinated this fall.

Schools did not turn out to be hotbeds of infection in previous waves, but school districts have fewer restrictions in place now.

“A lot of schools across the country are just not taking this very seriously this year,” Gounder said. “So you will see transmission from schools back into the community.”

Americans should expect to see surges over Thanksgiving, Christmas and New Year’s, as they did last year, she added — although none as bad as they were last winter.

“I don’t think we’re really going to turn the corner until next spring,” Gounder said.

2022 World Cup Qualifier: How Bafana Bafana could start against Zimbabwe

The Worst Thing Each Main Character Has Done