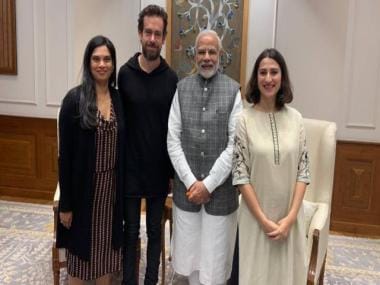 Before Elon Musk acquired Twitter, he said he did not “have confidence in [the company’s] management. He’s made his displeasure quite evident as he has gone after Vijaya Gadde, the company’s head of legal, policy, and trust & safety issues.

Responding to a tweet by a prominent podcast host who shared an article on Gadde titled ‘Twitter’s top lawyer assures staff, cries during meeting about Musk takeover’, the billionaire called the suspension of a major news organistion’s Twitter account “incredibly inappropriate”. He was referring to the company’s decision to suspend New York Post over a controversial report on United States president Joe Biden’s son Hunter Biden.

After responding to Saagar Enjeti, the co-host of the Breaking Points with Krystal and Saagar podcast, Musk posted a meme with a photograph of Gadde and the infamous podcaster Joe Rogan, accusing Twitter of left-wing bias.

Who is Gadde? And why is Musk going after her?

Enjeti described the Indian-American Twitter executive as the “top censorship advocate” at the social media company. She leads the team that moderates content on the platform and is responsible for the company’s safety policy.

An article in The Times of India says that Gadde is “the most powerful media executive you’ve ever heard of”.

The 48-year-old is responsible for some of the company’s big decisions including suspending former US president Donald Trump’s Twitter account after the US Capitol riots. She has been instrumental in shutting down conservative voices on the platform.

“The account of @realDonaldTrump has been permanently suspended from Twitter due to the risk of further violence,” she tweeted on January 9, 2021.

The decision to ban political ads on Twitter ahead of the 2020 US presidential elections was also taken by the team helmed by Gadde.

Soon after the war in Ukraine began, Twitter started labelling tweets shared by Russian state media and took steps to reduce the circulation of propaganda on the platform.

As Enjeti pointed out in his tweet, the lawyer censored the controversial story on Hunter Biden published in The New York Post. The article had alleged that Biden, son of then-presidential candidate Joe Biden, had improper connections to an executive at a Ukrainian energy firm. Twitter later reversed the move, but not before it was accused of censoring information that could have hurt a Democratic candidate, according to a Bloomberg report.

Bloomberg called Gadde the “final word” on blocking tweets and accounts on the platform.

When former Twitter CEO Jack Dorsey visited India in November 2018, he kicked up a storm for holding a poster that read “smash Brahminical patriarchy”. As his photograph went viral on Twitter, some right-wing activists blamed Gadde for Dorsey’s decision. She had then apologised for the incident, saying it was not reflective of Twitter’s stand.

Gadde and Twitter have been accused of leaning to the left. It is what Musk reiterated in his tweet attacking the lawyer. “For Twitter to deserve public trust, it must be politically neutral, which effectively means upsetting the far right and the far left equally,” he wrote.

When Musk goes after someone his army of loyal and often rabid supporters – called Musketeers – follow. Gadde became a target of online hate with some trolls harassing her for her Indian roots, throwing racist slurs like curry and making references to the caste system in the country.

Others used expletives or derogatory language and blamed her for having “destroyed countless @Twitter accounts for speaking the truth.” Some called for her to be fired or suggested she should leave on her own. Some of the abusive tweets were later removed for violating Twitter rules, reports Bloomberg. Some of the racist comments were targeted at Twitter CEO Parag Agrawal, who is also of Indian origin.

Musk is a self-proclaimed free-speech absolutist and is intolerant toward Twitter’s censorship policies. “By ‘free speech,’ I simply mean that which matches the law,” he said in a tweet Tuesday. “I am against censorship that goes far beyond the law.”

Musk’s criticism of Gadde has not gone down well with some current Twitter executives including the CEO. While Agrawal did not go all out and slam Musk, he subtly spoke in favour of his legal head. “I took this job to change Twitter for the better, course correct where we need to, and strengthen the service. Proud of our people who continue to do the work with focus and urgency despite the noise,” he wrote.

Former CEO Ev Williams also spoke up for Gadde. “Just to say, there are many defensible _nuanced_ perspectives on content moderation and, also, @vijayais one of the most thoughtful, principled people I know,” he tweeted.

Just to say, there are many defensible _nuanced_ perspectives on content moderation and, also, @vijaya is one of the most thoughtful, principled people I know.

Dorsey, who was said to be close to Gadde, has however remained mum.

Gadde, who was born in Hyderabad, came to the US at the age of three and grew up in Texas. She studied at Cornell University and the New York University School of Law.

Prior to joining the California-based social media company, Gadde was senior director of legal at the US multinational corporation Juniper Networks. Previously, she worked for nearly a decade at Wilson Sonsini Goodrich & Rosati, a law firm based in California. Now she is also on the boards of Guardant Health, a company dedicated to defeating cancer, Planet, a leader in the Earth observation industry, and Mercy Corps, a humanitarian aid organisation.

Gadde joined Twitter in 2011 and has taken some tough but important decisions for maintaining the sanctity of the company. But now sources say that like Agrawal, she might be on her way out once Musk’s buyout is complete.

Ford Ranger May Be The Next Electric Truck Coming From Tennessee