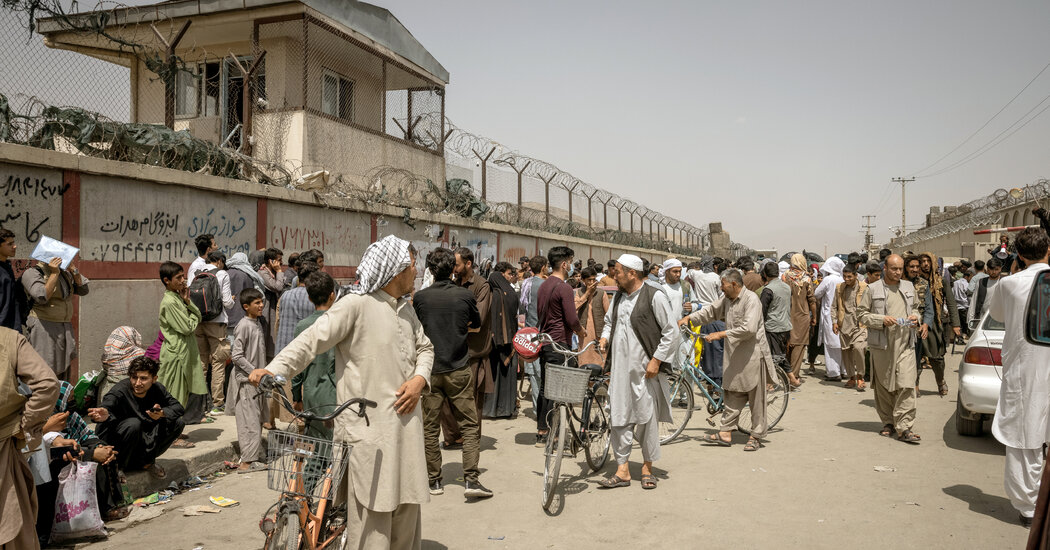 President Biden’s decision not to begin a mass evacuation from Afghanistan of interpreters, guides and their relatives earlier has left thousands in limbo. Women in particular are frantically erasing their links to the U.S. for fear that they will be targeted by the Taliban. The U.S. evacuated 2,000 people, mostly Afghans and NATO personnel, from Kabul in 24 hours.

Even going to Kabul’s airport to try to secure a place on a departing flight has become a life-or-death decision. The Taliban have blocked entrances, fired rifles and beaten some people in the crowds. Inside, 5,000 U.S. troops were stationed to evacuate people. Taliban fighters have quickly cracked down on demonstrations elsewhere in the country.

The scenes in Afghanistan have panicked European politicians, who fear that another mass movement of Muslim asylum seekers will fan the embers of the far-right and populist movements that reshaped European politics in the mid-2010s. Afghans are facing a compassion deficit in Europe that may be insurmountable.

Financial squeeze: The U.S. blocked the Taliban from access to billions of dollars belonging to the Afghan central bank.

Britain-U.S. relations: The U.S.’s rapid withdrawal has left some British lawmakers embittered by what they see as a lack of coordination over the timing and tactics, ignoring Britain’s role in the war.

A fourth wave of infections in Israel is rapidly approaching the levels of the country’s worst days of the pandemic last winter. The daily rate of confirmed new virus cases has more than doubled in the last two weeks, hitting a six-month high of over 8,000 new cases on Monday. At least 230 people have died from Covid this month.

Some experts fear that Israel’s high rate of infections among early vaccine recipients may indicate a waning of the vaccine’s protections over time, especially against the highly contagious Delta variant. The government has reintroduced restrictions on gatherings and is now considering a new lockdown.

Since March, the country had returned almost to its prepandemic normal, with concerts and sports events opened up to the vaccinated. “The vaccinations were supposed to solve everything,” a public health expert said. Now, he added, it is clear that masks and crowd limits must be part of the approach.

Related: New studies released by the Centers for Disease Control and Prevention in the U.S. show that although vaccines remain highly effective against hospitalizations and deaths, the bulwark they provide against infection has weakened in the past few months.

Days after a magnitude 7.2 earthquake devastated part of Haiti’s southern peninsula and killed at least 2,180 people, some areas, including the village of Toirac, had yet to be visited by any emergency authorities or aid groups.

After at least 20 people in Toirac were killed while attending a funeral at the time of the quake, villagers dug out the dead, buried them in mass graves and built makeshift shelters from their collapsed homes as Tropical Storm Grace pelted the area with heavy rain. Here’s how it happened.

The U.N., the U.S. and an array of international aid groups have mobilized to send help, but the effort has remained patchy and limited, mostly confined to providing urgent medical assistance and basic supplies to the main population centers close to airstrips.

Quotable: “I don’t expect any help; we’re on our own,” said Michel Milord, a farmer in Toirac, who lost his wife and his house in the earthquake. “No one trusts this government here.”

For a summer project, we gave sportswriters 900 words and a theme: “freedom.” Here’s what they came up with.

The science of food

J. Kenji López-Alt, a food columnist for The Times, approaches home cooking like a scientist. He spoke with Times Insider about how his kitchen is also a lab. Here’s an excerpt.

How would you describe your approach to cooking?

I try to explain the science and technique behind home cooking. My thought is always that understanding science can help you become better at something.

How did you arrive at that view?

I’ve always been into science. My father is a scientist. My grandfather is a scientist, so that was part of my education growing up. After college, I was cooking in restaurants, and I had a lot of questions about why certain things worked the way they did. I eventually transitioned to doing recipe development at Cook’s Illustrated.

What kind of meals or recipes are you drawn to?

There’s a big difference between what I write about and what I cook at home. I cook based on how much time I have and whatever leftovers I have, and I make adjustments on the fly.

So you’re not a meal planner or a Sunday meal prepper?

No, I don’t know what we’re having for dinner tonight.

And here is the Spelling Bee.

You can find all our puzzles here.

That’s it for today’s briefing. Have a great day. — Natasha

P.S. A fight between the writers Ernest Hemingway and Max Eastman ended up in The Times 84 years ago this month. Hemingway said he had slapped Eastman, who claimed to have thrown Hemingway over a desk.

The latest episode of “The Daily” is about the Haiti earthquake.

You can reach Natasha and the team at [email protected].